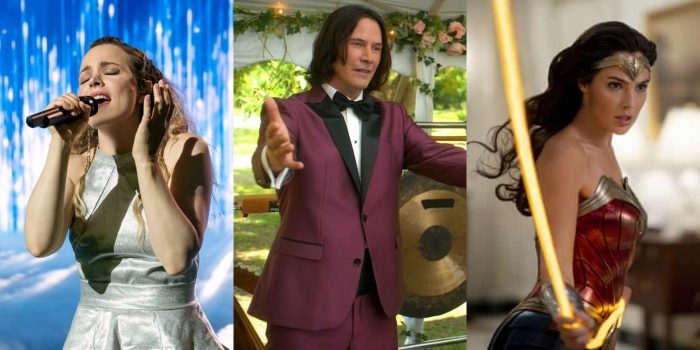 Let’s be honest: 2020 was a bad year. Bad for the world, bad for the economy, and bad for the soul. Not to even mention the movie industry, which suffered blows from theater closings and studio delays. Entertainment seemed to be the last thing on people’s minds, and yet, entertainment is what many people turned to in the long months of lockdown. Comfort television became consumed as frequently as comfort food, and many people — after at first feeding into their paranoia with early viewings of Contagion — started to seek out the same in films too.

And, perhaps coincidentally, Hollywood rose to meet their demands. It became par for the course for studios to release their films early to PVOD or streaming, though for the most part there wouldn’t be any one defining theme among them — just the fact that people could see theatrical releases from the comfort of their homes was pleasing enough.

But the films that would capture the feeling of the times began to hit in the summer, and that’s when “nice” started to become the norm.

This year, there was a prevailing hunger for “nice.” Even if you take it over to the arthouse side, First Cow and Nomadland, two films without a hint of malice in their bones, topped most critics’ best-of-the-year lists. Hell, the most cynical of the “nice” films is Palm Springs, a Sundance darling that would debut straight to Hulu in July, was about how life was pain to live, but it was worth living anyways.

(The rest of this post features spoilers for Eurovision Song Contest, Bill and Ted Face the Music, and Wonder Woman 1984.)

Perhaps the first film to tap into the hunger for niceness was Eurovision Song Contest: The Story of Fire Saga, the Will Ferrell-Rachel McAdams musical comedy that took the internet by storm when it debuted on Netflix in June. A borderline nonsensical movie that features life-endangering musical performances, the ghost of Demi Lovato, and a surprising number of vengeful elves, Eurovision Song Contest toed the line between satire and sincere comedy. But more importantly, it — for a brief, shining moment — brought back the communal experience of liking something really dumb together.

ALSO READ  ‘The Shawshank Redemption’ Honest Trailer: The Movie No One Saw in Theaters But Everyone Watches on Cable

There’s something inherently genial about the musical movie: the genre in and of itself is about putting on a show. It’s about entertaining, about pleasing people. And more often than not, it’s about characters wearing emotions on their sleeves, belting out their deepest desires in a show-stopping number. Eurovision Song Contest, for all its silliness, embodies all of these elements. It’s less satire than it is Ferrell (who co-wrote the script with Andrew Steele) and director David Dobkin’s outlandish love letter to the equally outlandish Eurovision Song Contest, an international singing competition that Americans can’t even begin to understand the absurdity of. It’s perhaps best displayed in one sequence, played ramrod straight by the film, in which all the past winners of the real Eurovision Song Contest get together to sing a relay song in Pitch Perfect style sequence that really seemed to just be about appreciating the unifying power of music. But for all its bombast and spectacle, Eurovision Song Contest‘s appeal can probably best be summarized by: Play “Ja Ja Ding Dong”!

If Eurovision Song Contest was a unifying film in its silliness and accidental sincerity, Bill and Ted Face the Music would take those ideas and run with it — right into hell. The long-awaited third film in the Bill and Ted series, the Dean Parisot-directed comedy picks up with Bill (Alex Winter) and Ted (Keanu Reeves) when they’re well into middle age and have still not written the song that will save humanity yet. With their marriages collapsing and their careers deteriorating, Bill and Ted receive a visit from the leaders of the future, who have come to the conclusion that Bill and Ted must write the song now, or the universe will implode. And if they can’t do that, they’ll get assassinated by a killer robot.

Though it was so long in the making, Bill and Ted Face the Music felt urgently like the “perfect film for right now” — a phrase that has become old-hat and tired by now. But Bill and Ted Face the Music, and its themes of middle-aged disappointment, putting one’s hope in future generations, and killer robots with insecurity issues, somehow managed to tap into the prevailing feelings of the 2020 summer in which it was released — one of uncertainty and anxiety and, that nasty thing, hope. It all culminates in a transcendent final scene, in which Bill and Ted realize that the song to save the universe isn’t one they write, or even necessarily what their talented daughters write. It’s one that is played simultaneously across the world, and across multiple timelines. Humanity uniting to stop the universe from falling apart. What a cheesy, sentimental thing to conclude, when in reality, that was the complete opposite of what was happening. And maybe it’s a conclusion that can only happen once in a major film this year, because when a superhero movie would do the same thing four months later, it wouldn’t hit quite the same chord.

Wonder Woman 1984 has a lot of goofy, structurally messy faults, but its heart is in the right place. And at its heart is the idea that everyone is deserving of grace and forgiveness, no matter their sins. As we’ve seen during this pandemic, the American people can be staggeringly selfish to the point of endangering the greater well-being, and that selfishness is what Wonder Woman 1984 (clumsily) tries to hone in on. The ’80s-set superhero sequel directed by Patty Jenkins and starring Gal Gadot was hailed by some viewers (including this critic) as another “movie for its time,” with its message of “maybe greed isn’t good.”

It can be best summed up by the final scene, in which echoes of Bill and Ted Face the Music‘s “song heard around the world” sequence are felt. As the world descends into chaos — cows in Washington D.C., people dropping dead, the world powers heading to nuclear apocalypse — from the abundance of wishes being granted by the all-powerful Maxwell Lord (Pedro Pascal), Diana makes one final appeal to the people. “This world was a beautiful place just as it was, and you cannot have it all,” she implores. “You can only have the truth, and the truth is enough. The truth is the beautiful.”

And amazingly, everyone in the world renounces their wish. It feels like a fitting continuation of the first film’s message — that humanity is worth saving despite their flaws — with Wonder Woman 1984 coming to the conclusion that humanity is capable of saving themselves too. Perhaps it’s a message that rings false now after months of seeing the opposite play out for so long, and that hope that people saw in the Bill and Ted ending has since vanished into one of abject cynicism, but there’s no denying that Wonder Woman 1984 is the imperfectly hopeful film to close out an imperfect year.

The post 2020 Was, Against All Odds, the Year of the “Nice” Movie appeared first on /Film.

previousThe Stand: Inside the Show’s Changes to Nick, Tom, and Ralph
nextMarvel Comics & Ghost Rider: Return Of Vengeance #1 Spoilers & Review: He’s Back, But Why?