A Discovery of Witches Season 1 Recap: Diana, Matthew, The Prophecy and The Congregation 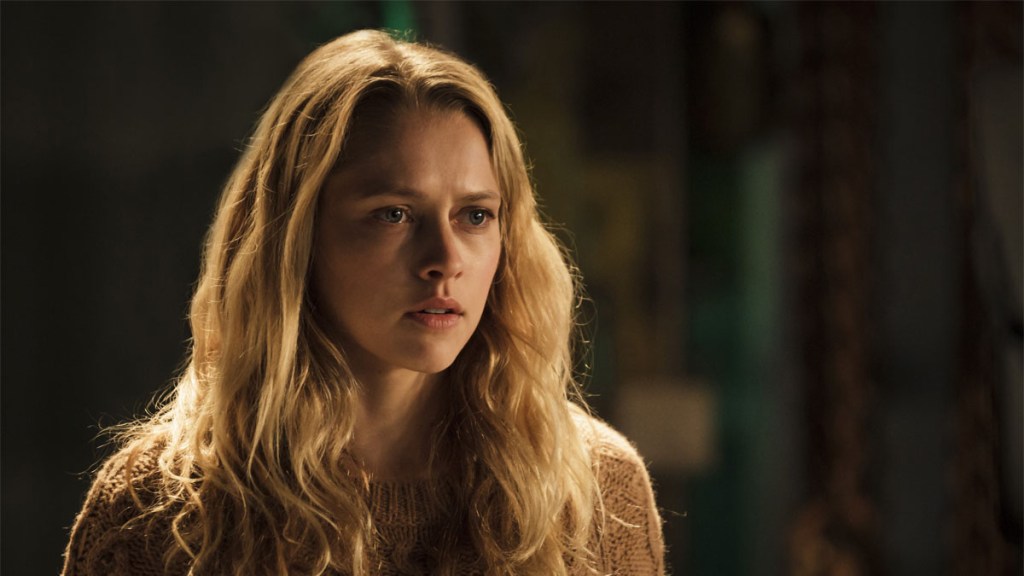 At the start of A Discovery of Witches season one, the magical world was in crisis. Creatures – witches, vampires and demons – were in decline on Earth. The power of witches was waning, with some forms of ancient magic extinct for centuries. Vampires were finding themselves unable to sire other vampires.

Divisions between the three species were stark, with deep prejudice and resentment between historical enemies the vampires and the witches, while demons were marginalised and restricted by rules enforced by powerful ruling group The Congregation. Division and mistrust ruled.

Then came Professor Diana Bishop. Born to witches but orphaned as a child, Diana spent her life avoiding magic. What magical power she displayed she wasn’t able to control. When her academic career took her to Oxford’s Bodleian Library, she came into contact with a sought-after powerful book thought to contain the secret to vampire creation. She also came into contact (and we’re talking contact) with Matthew Clairmont, a geneticist investigating magical creatures’ disappearing powers and a 1500 year-old vampire.

By the end of the season, Diana and Matthew had broken the sacred covenant forbidding interspecies relationships and ‘mated’ for life. Diana discovered that her parents had spellbound her prodigious powers for her own protection as a child. While she began to learn how to use her magic, Diana and Matthew were forced into hiding by three witches intent on punishing them for their interspecies transgression and wanting Diana’s help in destroying the vampires. To escape pursuit, they used Diana’s magic to ‘Time Walk’ back to Elizabethan England, where season two finds them…

Your power is instinctive, based on need

Before Diana was born, her mother was pursued by Peter Knox, one of the three witches who sit on ruling council The Congregation. Though she refused him, Knox continued to be obsessed with her and later insisted on personally testing her young daughter’s magical powers. Diana was already showing evidence of prodigious magic as a child, so to protect her from Knox, her parents cast a spell to hide her powers. She would only be able to access her magic at times of great need and for her own protection.

As a result, Diana grew up believing that she had little magic, and after her parents were killed, shunned witchcraft entirely. When academic work led her to call up ancient tome Ashmole 782 from the Bodleian library (a book missing for centuries that no other creature had been able to find), she experienced uncontrollable magic as The Book of Life revealed its secrets. Her access to the book made her a target. Everybody wanted it – Matthew Clairmont to learn about the origins of vampires and why they could no longer sire, Peter Knox to learn how witches could destroy vampires… Diana stood up to Knox and the Congregation, and made powerful enemies.

When threatened and later, heartbroken, Diana instinctively conjured up Witch Wind and Witch Rain, two elemental powers thought to be extinct. After being captured and tortured by Finnish dark witch Satu for information on the book, Diana used her magic to strip Satu of her own powers and flew to her escape. When vampire Juliette – Matthew’s former lover – attacked him, Diana killed her using another elemental magic – Witch Fire. She brought Matthew back to health by letting him drink her blood and making a deal with the Goddess to give anything for his recovery. She was warned that there will be a price to pay.

After discovering that her father was a Time Walker and that she shared his power, Diana and Matthew used three objects from his past to travel back to Elizabethan England where they could hide from Knox, Gerbert and Satu, who had pursued them to New York.

You have committed treason against The Congregation. Your punishment is death by beheading and fire.

A council consisting of nine members (at any given time, three witches, three vampires and three demons), the Congregation convenes in Venice to hold trials, deliver punishments and maintain the shaky peace between the creatures, built on a covenant which forbids inter-species relationships.

Key Congregation members in season one included witches Peter Knox and Satu; vampires Baldwin Montclair (Matthew’s brother), Domenico Michele and Gerbert d’Aurillac; and Demon Agatha Wilson (mother to Nathaniel, who’s expecting a child with fellow demon Sophie). The Congregation want Diana Bishop because of her access to Ashmole 782, or the Book of Life, and to punish Matthew and Diana for breaking the covenant by mating.


Best Returning British TV Series 2021: the Most Anticipated Series Coming Back This Year

Towards the end of the series, Domenico double-crossed Gerbert and encouraged Gebert’s captive Juliette to break free of her bonds to go to America and kill Matthew (who had humiliated Domenico when he tried to retrieve Diana from Sept-Tours). Domenico used his deciding vote in Baldwin’s trial for treason to save him from execution, leaving Baldwin in his debt.

Knox and Gerbert plot to remove Baldwin from The Congregation, stage a coup and replace him with Matthew’s vampire ‘son’ Marcus, who they think will be easier to control.

There were two women, two human women… not like this, not like us, but I did love them.

Born in France in 500 AD, the human Matthew was a stonemason and architect who built a church in commemoration of his wife and son Blanca and Lucas, who both died of a fever. He tried to take his own life by throwing himself off the church tower, when Ysabeau de Clermont saved him by siring him as a vampire.

Ysabeau thus became his mother, her husband Philippe his father, and later, Baldwin his brother. He lived with them in the ancestral French castle of Sept-Tours, joining ancient philanthropic Order the Knights of Lazarus, of which Philippe was the Grandmaster until his death, when Matthew took over the role. Philippe had made Matthew promise that his brother Baldwin would never run the Order as he wished it to remain separate from the Congregation, the multi-species council led by Baldwin.

Beware the witch with the blood of the lion and the wolf, for with it, she shall destroy the children of the night.

So prophesied Meridiana, the witch kept alive by vampire Gerbert as a decapitated head in a box for centuries. Finnish witch Satu took pity on her and ended her suffering, which incurred Gerbert’s wrath. He has a habit of making women his captives, and until her rebellion and death (courtesy of Diana Bishop), Gerbert controlled vampire Juliette – who he’d sired to be Matthew’s lover and to infiltrate the powerful Clairmont family, whose position he wanted to topple – keeping her by his side in Venice.

Meridiana also told Gerbert a prophecy about two witches who would figure in the destruction of the vampires – one light and one dark. It’s supposed that Diana is the light witch and Satu her dark counterpart.

As a child, Diana’s mother told her a story about a “shadow prince”, which she believes to be Matthew.

In two parts: the first anatomical, the second psychological

Otherwise known as the Book of Life, Ashmole 782 appears only to Diana when she summons it at the Bodleian library. It’s thought to contain the secret of vampire creation, and Matthew theorises that it could help him discover the reason that vampires are no longer able to sire one another, and why creatures have been disappearing from Earth. Diana discovers that the book is a palimpsest and has hidden writing underneath its surface, including a modern inscription that reads “In two parts: the first anatomical, the second psychological.”

Diana also discovers that there are several pages missing from the start of the book, one of which is returned to her by her Aunts’ haunted house, along with a note from her father saying “Diana, you’ll need this xx”. She assumes that her father was the one who removed the vital pages from the book during one of his Time Walks through history, and that he is the reason that only she can access the book.

The Aunts’ haunted house delivers a single pearl earring to Diana (along with the missing page from Ashmole 782), which Matthew identifies as having belonged to his mother Ysabeau in the 16th century. Sophie (a demon born to witches, messing up The Congregation’s theory on cross-species relations) gives a family heirloom of a white statue to Diana, who she’d been told would need it at a specific time. It turned out to be a white queen chess piece that formerly belonged to Matthew and that he lost in a bet with Kit Marlowe on All Soul’s Eve in 1590. Matthew connects the chess piece to the pearl earring, and decides that the house is trying to send them to that particular time and place. To these objects he adds a signed copy of Marlowe’s Dr Faustus, completing the three. Ysabeau also sent Diana an inscribed ring of hers to wear.

The Knights of Lazarus

It might just be that the Knights have to take on The Congregation.

The Knights of Lazarus are a parallel organisation to the Congregation, established by Matthew’s father Philippe de Clairmont. It’s a philanthropic brotherhood who protect those who can’t protect themselves. In the season one finale, Matthew resigns from his inherited position as grandmaster and gives the role to his ‘son’ Marcus, telling him, “Je suis a votre commande, seigneur” (I’m at your service, my lord).

The season ended with Diana’s aunts Emily and Sarah going with Nathaniel and the pregnant Sophie to Sept-Tours, where Ysabeau had promised to keep them safe from The Congregation. Witches, demons and vampires all under the same roof… a taste of things to come?

The post A Discovery of Witches Season 1 Recap: Diana, Matthew, The Prophecy and The Congregation appeared first on Den of Geek.