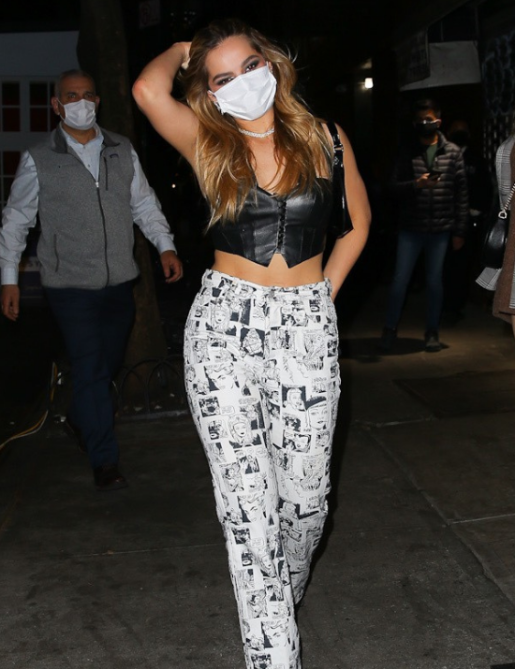 Ever wonder why Addison Rae‘s paparazzi photos happen to look so flawless? Apparently, the TikTok star is tipping off paparazzi photographers so they can snap her when she’s looking her best, Page Six reports.

Addison was snapped up all over town during a recent trip to New York in late March. The singer was in the city to promote her new single, “Obsessed,” and make her TV performance debut on The Tonight Show Starring Jimmy Fallon. While in the Big Apple, sources reportedly told The New York Post’s Page Six that the star stayed at “a relatively off-the-beaten-track hotel” instead of hotels like The Mercer, which are typically frequented by the paparazzi. Still, Addison was having photos taken of her all over Manhattan during her stay, suggesting that someone on her team was making sure to let the paps know about her whereabouts.

This isn’t exactly an entirely new practice, as some celebs have been known to work with the paparazzi from time to time to their own benefit. And according to Page Six, the 20-year-old TikToker is taking a page right out of the Kardashian family’s playbook. Addison, who is known friends with Kourtney Kardashian, is said to be “particularly interested in making sure her style has been well documented by the press.”

If it’s true, we can see where Addison gets her inspiration. After all, the Kardashian sisters are rarely spotted looking anything other than well-dressed. As for how Addison became so close to the Keeping Up With the Kardashians stars, it all started when the TikTok star was introduced to Kourtney through a mutual friend.

“I met Kourtney through a friend, through David,” Addison said during an episode of The Tom Ward Show, referring to YouTuber David Dobrik. Dobrik introduced Addison to the eldest Kardashian sister because her 11-year-old son, Mason, was a fan of Addison’s TikTok videos. The rest, as they say, is history. “I kind of just stuck around and we got really close. We started working out together. We did a video on her YouTube of us doing a butt workout and stuff, so that was fun,” Addison added during her Tom Ward appearance.

During a recent statement to Entertainment Tonight, Addison explained that the pair have a “great friendship,” despite their 21-year age gap (Kourtney, as it turns out, is actually the same age as Addison’s mother). “Kourtney and I just happen to have a great friendship, which is really fun,” Addison told ET on April 2. “She’s been a great person to have in my life. She said in my YouTube video that I had great energy that she liked to be around. I think she has great energy as well and she has so much experience in her life that I can really just look at and kind of learn from.” She continued, “At the end of the day, I think friendships are just what you make them. What you have, like the time you spend with them, the things you enjoy doing.”

previousVILE Saturday Night Live: ‘Lil Nas X’ Honors Easter Triduum with Lap Dance on God
nextDid Peter Doocy Get Psaki to Admit Biden Will Keep Lying About Georgia Voting Law?
This website uses cookies to improve your experience. We'll assume you're ok with this, but you can opt-out if you wish. Cookie settingsACCEPT
Privacy & Cookies Policy