Arrow Video has Ghosts, Cowboys, Chocolates, Monkeys & Wisconsin in May

The flowers are blossoming and Arrow Video is giving us a bouquet of Blu-rays that will let you stay pretty on the sofa. The five titles will you take to a haunted rental unit, a candy covered Japan, an Italian flavored Western, a germ infected America and a bizarre Wisconsin. A Ghost Waits has a guy fixing up a house where the last renters just abandoned. Why? Because it’s haunted, but the handy man doesn’t seem too scared. But should he be? Giants and Toys is about rival candy makers going at each other with the new media of television. The film gives a great glimpse of Mad Men in 1958’s Tokyo. Spaghetti Western fans will rejoice when Django arrives on 4K UHD. See the muddy glory of Franco Nero as he pulls a coffin into the middle of a troubled town. This is the film that established Sergio Corbucci as one of the kings of the genre. And now you can see it like you’re in the movie theater. Terry Gilliam’s 12 Monkeys arrives as limited edition Steelbook Blu-ray. The film has Bruce Willis time travelling into the past to save the future. Finally regional director Bill Rebane gets a career spanning boxset with Weird Wisconsin: The Bill Rebane Collection. The boxset dips into the feature films of a guy who made low budget films around. This is great if you’ve enjoyed Arrow’s recent He Came from the Swamp: The William Grefé Collection.

Here’s the press release from Arrow Video with all the details about the upcoming Blu-rays and the Django 4K UHD:

In this definitive spaghetti western, Franco Nero (Keoma, The Fifth Cord) gives a career-defining performance as Django, a mysterious loner who arrives at a mud-drenched ghost town on the Mexico-US border, ominously dragging a coffin behind him. After saving imperilled prostitute Maria (Loredana Nusciak), Django becomes embroiled in a brutal feud between a racist gang and a band of Mexican revolutionaries… With Django, director Sergio Corbucci (The Great Silence) upped the ante for sadism and sensationalism in westerns, depicting machine-gun massacres, mud-fighting prostitutes and savage mutilations. A huge hit with international audiences, Django‘s brand of bleak nihilism would be repeatedly emulated in a raft of unofficial sequels. The film is presented here in its 4K UHD Blu-ray debut, with a wealth of extras. Also included is the bonus feature Texas, Adios on Blu-ray, which also stars Franco Nero, and was released as a sequel to Django in some countries.

The Future Is History

THE FUTURE IS HISTORY Following the commercial and critical success of The Fisher King, Terry Gilliam’s next feature would turn to science fiction and a screenplay by Janet and David Peoples (Blade Runner, Unforgiven) inspired by Chris Marker’s classic short film La Jetée. In 1996, a deadly virus is unleashed by a group calling themselves the Army of the Twelve Monkeys, destroying much of the world’s population and forcing survivors underground. In 2035, prisoner James Cole (Bruce Willis, Die Hard) is chosen to go back in time and help scientists in their search for a cure. Featuring an Oscar-nominated turn by Brad Pitt (Fight Club) as mental patient Jeffrey Goines, Twelve Monkeys would become Gilliam’s most successful film and is now widely regarded as a sci-fi classic.

The essential Bill Rebane movie collection, one of America’s most tenacious outsider auteurs! 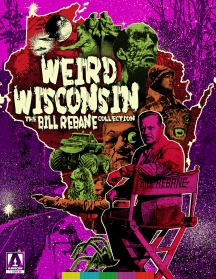 Bringing together six films, all new to Blu-ray and in brand new restorations, Weird Wisconsin: The Bill Rebane Collection packs in a mutant astronaut bothering blissful sunbathers (Monster A Go-Go), a contagion apocalypse as seen from the vantage point of a remote mountain cabin (Invasion from Inner Earth), deadly alien spores from the rocks of Mars (The Alpha Incident), rural gothic and outright horror (The Demons of Ludlow), an eccentric ‘body count’ movie (The Game) and a comedy smash-’em up that pits three hillbilly stooges against a talking Monster Truck with artificial intelligence (Twister’s Revenge).