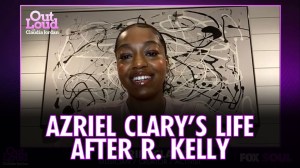 At just 23 years of age, Azriel Clary has endured a lifetime of stress and strife but thankfully, she hasn’t let it dull her shine. However, in a new interview, Clary stated that members of the Black community turned their backs on her after she split with her alleged abuser, R. Kelly.

Clary sat down with Fox Soul’s Out Loud with Claudia Jordan program for a video chat that was published on Wednesday (Dec. 30), detailing her life’s happenings since going public with her split from Kelly and sharing her survival story. While Clary has promised to deliver a tell-all in some form, she gave glimpses of her left after Kelly, highlighting that she was victim-shamed by the very people that should have protected her.

“A majority of the backlash that I received was from the Black community and other influencers and celebrities,” Clary shared. “But more importantly, that’s kind of what made me feel like it is quite important that I share this because there are so many people that are just like me. Victims are not the ones that should be shamed.”

Sure enough, Clary shared the interview via her Instagram page where she was trolled by supporters of Kelly accusing her of milking the story instead of rallying around her.

Check out the full interview below.

previous‘His House’ Delivers the Biggest Scare of the Year – While Also Servicing Its Story
nextWonderful, Weird, & WTF — The Absolutely Crazy Things That Defined 2020!