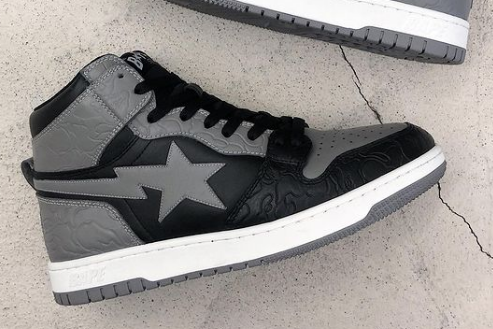 Decades after A Bathing Ape (BAPE for short) blew up by blatantly biting Nike’s classic Air Force 1 silhouette, the OG Japanese street brand is looking to recapture that “lightning in a bottle” and is rumored to once again be copying another classic sneaker style.

Pictures have leaked on the internet of BAPE’s upcoming Court Sta silhouettes and sneakerheads around the world were quick to point out that the “new ” joints closely resemble the grails known as the Air Jordan 1 High’s and some low top variants that also look familiar. Draped in the fan favorite “Shadow” colorway to the Air Jordan 1, the sneakers also feature BAPE’s signature star on the sides and it’s gorilla camouflage etched into the leather.

How Nike doesn’t sue BAPE like they did Warren Lotas is beyond us, but they won’t and here we are. We ain’t trying to start no ish, just sayin.’

Though BAPE haven’t exactly been flooding the market with new kicks in recent years (they did have some classics back in the day), we’re lowkey surprised they waited this long to bite a Jordan silhouette.

The “new” BAPE Court Sta kicks are rumored to drop some time in 2021. Will y’all be picking up a pair or saving your money for actual Air Jordan 1 High’s? Let us know in the comments section.

previous‘Ted Lasso’ Provided the Warmest, Kindest Escape From the Horrors of 2020
nextOlivia Jade Teases YouTube Return After Lori Loughlin’s Prison Release: ‘I Guess I Will Come Back’