‘Borat 2’ Star Maria Bakalova Felt It Was Her “Duty” to Go Through With Giuliani Scene, Had a Sweet Reunion With Babysitter Jeanise Jones 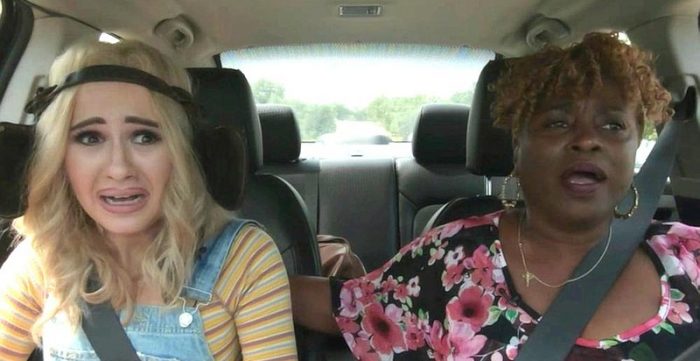 Maria Bakalova was the undeniable breakout star of Borat Subsequent Moviefilm, an unknown Bulgarian actress straight out of acting school who was able to hold her own against prankster extraordinaire Sacha Baron Cohen and dupe U.S. political figures like Rudy Giuliani. So it’s no wonder that the most buzzed about scenes from the Borat sequel usually feature Bakalova, including the aforementioned Giuliani interview and a sequence involving Jeanise Jones, a kindly 62-year-old woman who was recruited to babysit Bakalova’s Tutar.

In a recent interview, Bakalova revealed her thought process going into both difficult scenes, and her tearful reunion with Jones after the film shoot.

In an interview with the LA Times, Bakalova went into detail about her audition process (“I did it on a whim and two weeks later, I was flying to London for the callback”) and how she had to convince her parents she was starring in a legitimate film (“I kept telling them not to worry and this was going to be a real, legit movie”). But, as is the case with many of these on-the-cuff films, the conversation turned to the scenes that were most difficult to film or improvise.

The first was the one you’d expect: the interview with Rudy Giuliani, in which the attorney can be seen sticking his hand down his pants. Bakalova revealed that she never felt unsafe during the scene, but was admittedly anxious “because it was an intense situation.” But the actress felt it her “duty” to do the scene:

“I knew who he was. I was afraid because Rudy is a lawyer, and he is the president’s lawyer. I am not an American and don’t know about American politics. But I knew that as an actor, it was my duty to do this scene to save the movie. I also knew that I wasn’t alone in the room because Sacha was hiding there. I knew that if something happened, I could make my exit. But to be honest, my heart was definitely racing because it was an intense situation. The movie has been out for a few months, and everyone can see it and decide for themselves what to accept and believe.”

The harrowing scene would unsurprisingly make headlines after the film’s release on Amazon Prime Video, though another scene would earn attention for the complete opposite reason: the sequence involving professional babysitter Jeanise Jones, who earned the sympathy of the audience, and even righteous anger from those who believed her kindness was exploited. A fundraiser was even set up in her name, to which Baron Cohen donated $100,000. And as the one who was meant to be tricking Jones, Bakalova felt the most distress over that scene, the actress revealed, adding that the two of them had a tearful reunion after the film shoot:

“Jeanise is a true angel. I will probably always think of her as my godmother, a real hero and life coach. She just wanted to help this girl become a strong woman. We had a real human connection from the very first day we met. I called her on Thanksgiving: It was my first American Thanksgiving and was also my best. I was so happy to talk to her that I started to cry. When we were shooting, it was very hard for me, because I wanted to tell her not to worry about me. She is a really good example of how important it is to be a good person and care about others.”

The post ‘Borat 2’ Star Maria Bakalova Felt It Was Her “Duty” to Go Through With Giuliani Scene, Had a Sweet Reunion With Babysitter Jeanise Jones appeared first on /Film.