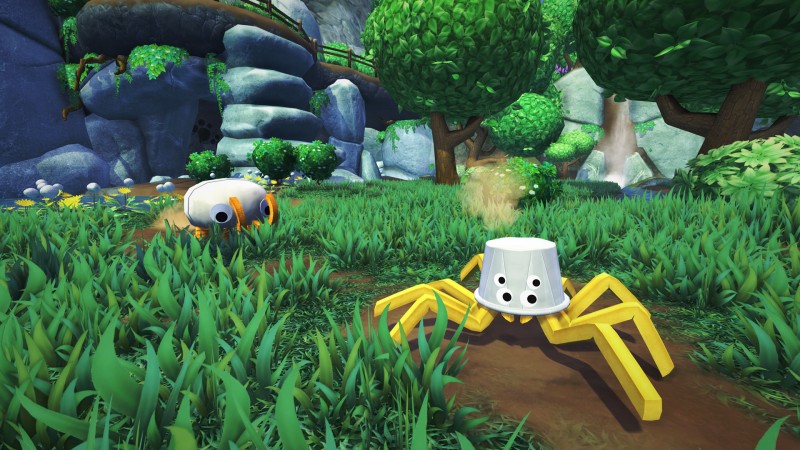 By any measure, Bugsnax is a silly game. You inhabit a world of Sesame Street-like monsters, and visit an island filled with bugs shaped like snacks – hot dogs, soda cans, and more. The googly-eyed inhabitants inexplicably desire to eat these bugsnax, which transform their limbs into the objects they’ve devoured. This process is called “snakification,” and for some reason, it delights rather than terrifies everyone. You must bring the scattered townsfolk back together, usually by capturing particular creatures and feeding them to individuals, even as absurd melodramas play out between the characters. It is as strange as it sounds.

While that makes for an unusual wrapper, Bugsnax is really a puzzle-solving adventure game. You wander several relatively small open areas from a first-person perspective, scanning and bagging the little walking morsels by luring, trapping, or tricking them. Along the way, you get to know many offbeat island dwellers, and unravel a mystery about the missing founder of the settlement.

The lighthearted but deeply strange premise isn’t always enough to keep the story engaging, and there’s a lot of borderline-nonsensical spoken dialogue as you meet and problem-solve for the eccentric cast. When the storytelling works, it’s because everything is communicated through such an earnest and wholesome delivery. All the flawed characters are lonely, and themes around the value of community and relationships make for a heartfelt message. Whether it’s the guy who tries to understand if his longtime roommate is really his boyfriend or not, or the husband and wife who love each other despite being completely different, everyone is struggling to connect. And also, struggling to make puns. So many puns.

To reunite everyone, you have to hunt down and capture the adorable and tasty bugsnax, and several dozen varieties across the island each have different behaviors to decipher, which is initially a compelling hook. The puzzles start out extremely simple, and ramp up to be moderately challenging by the end. However, the challenge often comes through convoluted action and tool combinations that don’t always make a lot of sense. Sometimes, I stumbled onto a solution through trial and error, or found the correct answer, but failed because of the finicky way the hunting tools worked. From swinging nets to launching springboards, it can be fun to put together a multi-step plan to lure the burning hot stew creature to the freezing popsicle insect that will cool it down enough to pick up, but more often than not, the process just feels tedious.

The quest structure doesn’t help, as the absurd premise (I need to eat that bug!) leads to increasingly inane tasks prescribed by the helpless island denizens. With each passing quest, I felt less like a brave island explorer, and more like one of those grocery delivery people who hurriedly gathers apples at the store before rushing out to hand them over to impatient customers waiting at home. Even so, I appreciate that there’s a wide selection of available quests to uncover. You can mainline the core campaign in a few hours, but if you fall in love with these little bugsnax, a number of side quests offer more opportunities for digging back in.

Between character narratives, multiple active questlines, and a whole taxonomy of bugsnax, you have a lot to keep track of. I was pleased to find a smartly organized set of collections and tracking options in the pause menu; from scan data to details on the characters and locations uncovered, it helps the game feel cohesive and manageable.

Playing on PS5, I was also impressed with the early implementation of the built-in hint system. Through both written and video guides, players can glean puzzle solutions with the touch of a few buttons, rather than requiring that you look up an answer online. It’s a small but meaningful addition in a game like this, especially knowing that the game might be targeting some less experienced users who may value some help on more obtuse or challenging creature captures.

As a game, Bugsnax seems delighted by its own ridiculous premise, and hopes its players climb onboard as well. I appreciate its genuine and childlike themes, but much of the humor never really lands, and some late-game story threads around depression and abandonment are especially incongruous. With quests and puzzles that feel less like discoveries and more like errands, I’m left applauding a particularly entertaining idea, but one that never coalesces into a great time. 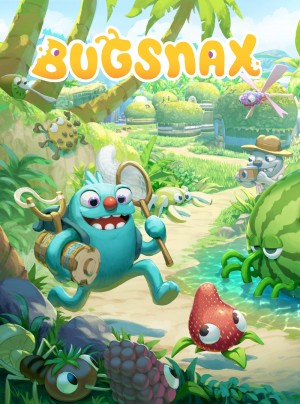 Summary: Young Horses has created a silly but heartfelt story and adventure game, but the creature-capturing gameplay never really hits its stride.

Concept: Explore a mysterious island and reunite its scattered townspeople by catching bugs shaped like snacks, then feeding them to the inhabitants

Graphics: Bright and inviting colors fill the characters and environments, but this is not a new-gen powerhouse in terms of visuals

Sound: Innocuous music bounces along with the adventure, while the townspeople are voiced with gusto

Playability: Some of the bug-catching tools in your arsenal are finicky, adding frustration to some otherwise light puzzle solving

Entertainment: Equal parts bizarre and good-hearted, Bugsnax is a breezy sequence of encounters and puzzles, but the continual errand structure of quests starts to feel like a chore

previousQUIZ: Can you match these ’90s alternative artists to their hit song?
nextGears Tactics Is Now Available For Xbox One And Windows 10 (Xbox Play Anywhere)