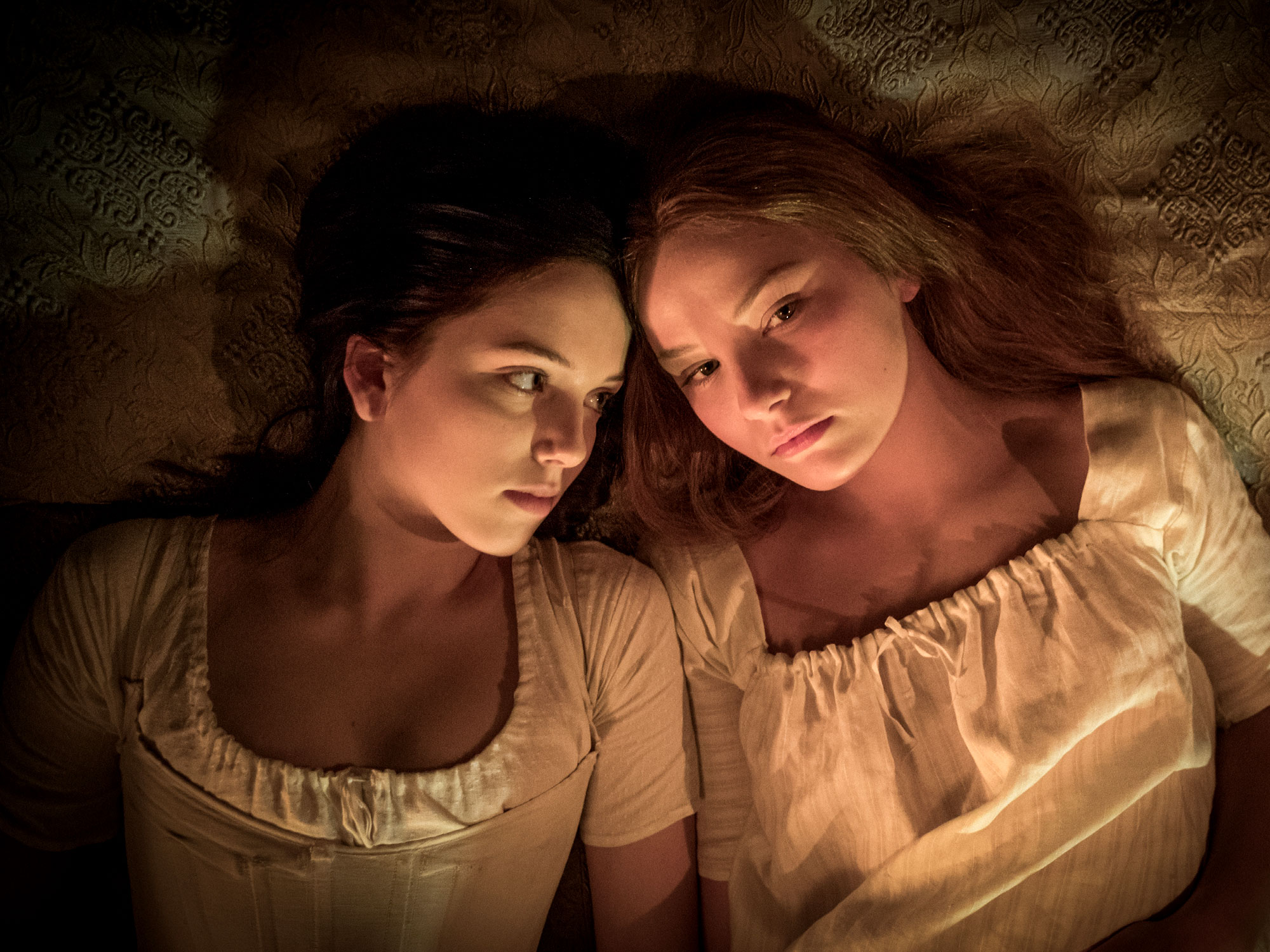 There are few more liberating sights in a costume drama than a character removing a restrictive item of clothing at the end of a long day; even if you’ve never experienced a ‘corset-gasm’ first-hand, whenever it occurs on-screen the sense of relief is palpable.

In Emily Harris’ first solo directorial feature, however, an act of sartorial salvation is rendered almost like something out of a body horror: a concussed woman is carefully cut out of a bodice, the garment gradually splitting apart like a ribcage. It’s a striking image in a film where carnality and sensuality are not always woven together quite so evocatively.

Contrary to the title, Carmilla centres around a teenage girl named Lara (Hannah Rae), who lives with her father (Greg Wise) in a grand, soulless manor in the south of England. With no discernible parental relationship to speak of, Lara spends most of her time under the watchful eye of Miss Fontaine (Jessica Raine), a stern, pious woman who it soon emerges is similarly plagued by feelings of isolation and repression. It is her responsibility to keep Lara in line; not only ensuring that she pays attention to her studies, but also binding her left hand behind her back in order to curb ‘sinful’ behavior.

One day while out walking, the usually taciturn governess opens up to Lara, urging her not to suppress her impulses – but what Miss Fontaine doesn’t yet realise is that Lara’s burgeoning sexual tendencies verge on masochistic. This is further augured by the arrival of a stranger (Devrim Lingnau), brought to the house in the dead of night following a carriage accident in the nearby
woods.

Lara is at once attracted to the mysterious interloper, who is foggy on the details of her circumstances (although we suspect she may know more than she’s letting on). The pair form an intense bond, but serious concerns over Carmilla’s true identity – and intentions – are raised when Lara is suddenly taken ill.
Sheridan Le Fanu’s Gothic novella ‘Carmilla’, upon which this film is loosely based, was published in 1872, thus predating Bram Stoker’s ‘Dracula’ by more than a quarter of a century. It is often cited as the earliest literary example of that now well-established trope: the lesbian vampire.

While Harris doesn’t hew particularly close to the vintage source material, she does retain many of its core themes, from coming of age and sexual awakening to jealousy, loss of innocence and religious persecution, while at the same time downplaying the more supernatural elements of the story. The result is an erotically-charged period romance more in the vein of William Oldroyd’s brutal chamber drama Lady Macbeth than it is a more genre-savvy twist on vampire lore like Let the Right One In.

Le Fanu’s eerie tale of female agency and same-sex desire has tended to be mined for raunchy Euro-romp fodder (see early ’70s sexploitation staples The Vampire Lovers and Lust for a Vampire), so it’s refreshing to see it tackled from a contemporary perspective. Yet while Carmilla certainly isn’t lacking in atmosphere, it doesn’t quite deliver on its alluring premise.

A chorus of Happy Birthday, please, for one Michael Theodore “Mickey” Mouse, who reaches the grand old age of 92 this month. As befits his advanced years, Mickey will likely be celebrating with a swig or two of Pepto Bismol and the Band of Brothers DVD boxset. Or, if he fancies, he could always fire […]

The post New on Disney Plus UK November 2020 appeared first on Den of Geek.

The star and producer of Shirley on the enticements of strong, complex female characters.

The post Elisabeth Moss: ‘As women, we’re expected to not be that unpleasant’ appeared first on Little White Lies.