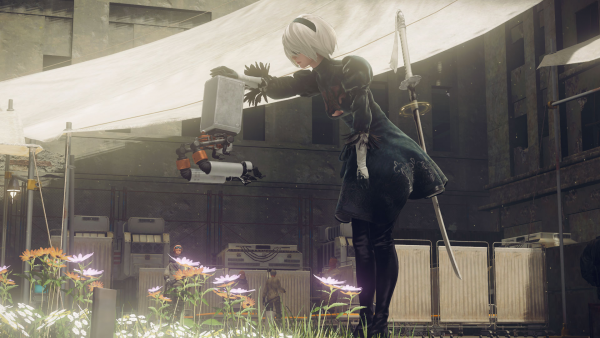 Nier: Replicant is releasing tomorrow, and surprise, it’s a pretty great remaster of the 2010 game. Celebrate its release with some savings on merchandise relating to its sequel, Nier: Automata.

I mean, who doesn’t love some artbooks, especially of a game as visually striking as Automata. Both Nier: Automata World Guides Volume 1 and 2 are on sale at Amazon US, and they both offering some great art and other content from the game’s universe. Volume 1 is down to $22.09, while Volume 2 is $24.84. It’s less than $50 for a whole lot of art!

The World guides aren’t the only Automata books around, though. There are also the novelizations of the game, Long Story Short and Short Story Long. Short Story Long is also cool because it includes the novelization of the related stage play, which gives important backstory to one of the characters. Let’s not forget about the YoRHa Boys novelization either, which is another stage play that’s important to overall world-building. Since the stage plays were only in Japan, these books are the only way to get those tasty Automata lore bits!

The physical, paperback versions of all of these are discounted, so now’s your chance to stock up on reading material!

Am I promoting these so that the Nier: Grimoire art and storybook gets translated from all the sales here? Maybe. But hey, it’s a win-win, you’ll get more delicious lore either way!

Want to know about all the hot gaming deals as they’re happening? Give Jelly Deals a follow on Twitter! Or, head over to the Jelly Deals site for regular buyer’s guides and features on all sorts of tech, entertainment, and more.

The post Celebrate Nier: Replicant’s release tomorrow with discounts on all sorts of Nier: Automata goodies appeared first on VG247.

previousTales Of Arise Is Now Available For Digital Pre-order And Pre-download On Xbox One And Xbox Series X|S
nextVerdansk ‘84 live now in Warzone Season 3: Three big map changes
This website uses cookies to improve your experience. We'll assume you're ok with this, but you can opt-out if you wish. Cookie settingsACCEPT
Privacy & Cookies Policy