When NECA put up their first wave of Back to the Future action figures for pre-order, it included the 1985 version of Marty McFly, a 2015 version when he’s in disguise as his son Marty McFly Jr., and the 1955 version of George McFly’s bully Biff Tannen. The figures looked incredible, but fans were a little disappointed that Christopher Lloyd as Dr. Emmett Brown wasn’t among them. Thankfully, they won’t have to wait too long after that first wave ships to get their hands on the man who made time travel possible, because NECA’s Doc Brown action figure is coming this fall and available for pre-order now.

NECA’s Back to the Future Doc Brown Action Figure 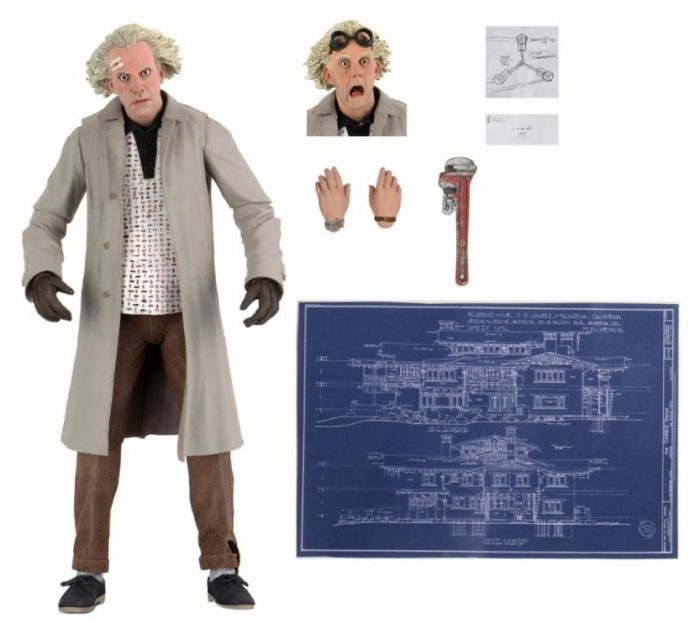 Great Scott! Doctor Emmett Brown, the genius behind the first time machine and one of the greatest movie characters of all time, is joining NECA’s Ultimate line. Using the official licensed likenss of actor Christopher Lloyd, Ultimate Doc Brown is based on his 1955 appearance in Back to the Future with 2 interchangable heads portraying a generic expression and the iconic shocked expression.

To help Marty get back to 1985, Doc Brown also comes with a wrench, drawing of the flux capacitor, interchangable hands, a blueprint of his house, and a letter from Marty! Comes in window box packaging.

The head sculpts on NECA’s action figures just keep getting better and better. The likeness of Christopher Lloyd is incredible in this first image of the figure, and that head sculpt with the shocked look on his face is priceless. Plus, the accessories are outstanding too, especially the drawing of the flux capacitor.

NECA’s Doc Brown action figure is available for pre-order right now for $29.99 at Big Bad Toy Store, where you can also currently pre-order the aforementioned Back to the Future action figures, including those inspired by the animated series. Doc Brown won’t ship until sometime in November, but the other figures are slated to ship out in September.

The post Cool Stuff: NECA Expands ‘Back to the Future’ Action Figure Line-Up with Doc Brown appeared first on /Film.