Waxwork Records joined the collectibles game this year with their new Spinatures line of highly detailed turntable-spinners featuring mini-busts of iconic characters from horror and sci-fi. So far we’ve seen the likes of Frankenstein, The Invisible Man, The Mummy and more, and this year the Universal Monsters line-up will expand along with a few other frightful additions thanks to the first ever Waxwork Records Spinatures Subscription. Get the details below. 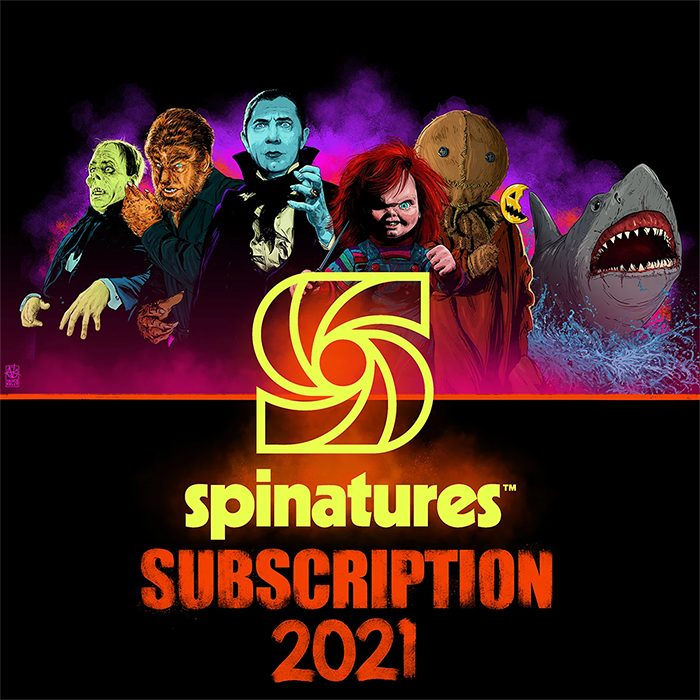 Joining the ongoing Waxwork Records vinyl soundtrack subscription is the first ever Spinatures Subscription. Fans who sign up for the new subscription will be getting six special Spinatures delivered to their door with a 25% discount. It doesn’t sound like these will be exclusive Spinatures, but rather a subscription that ensures you get this next wave of collectibles along with a Spinatures enamel pin and an 8×10 giclee print of some kind.

You can pre-order for $125 over at their website, and here are all the Spinatures you’ll be getting throughout the year.

Waxwork Records is thrilled to announce our upcoming Dracula Spinature! In collaboration with Universal and the Legosi family, we are excited to offer an official Spinature featuring the iconic likeness of Bela Lugosi’s Dracula from the landmark 1931 horror film!

In continuing with our line of Universal Horror toys and collectibles, we are proud to present The Phantom of the Opera Spinature! In partnership with Universal and the Chaney family, we are bringing you a high quality and detailed Phantom featuring the legendary “man of a thousand faces”, Lon Chaney.

Stalking his way toward your turntable under a full moon is the iconic Wolfman! We are so psyched to bring you the classic werewolf featuring the likeness of legendary actor, Lon Chaney Jr.. This shapeshifting beast is ready to terrorize your turntable!

We had the immense pleasure of releasing the original score to Trick ‘r Treat by composer Douglas Pipes back in 2014. Now, we are so happy to bring you a deluxe Sam Spinature to spin along with your Trick ‘r Treat vinyl! Sam has already become a Halloween season mainstay alongside other classic characters such as Michael Myers and Jason Voorhees. We are proud to dive even deeper into the Trick ‘r Treat universe!

What can we say? How awesome is it going to be watching Bruce the shark breach the ocean waters right on your turntable?! This will be our biggest and baddest Spinature, yet!

Wanna play? Waxwork Records is thrilled to bring you the lovable, and fearsome, serial killer trapped in a doll’s body. Get ready for an official Chucky Spinature from everyones favorite Child’s Play sequel!