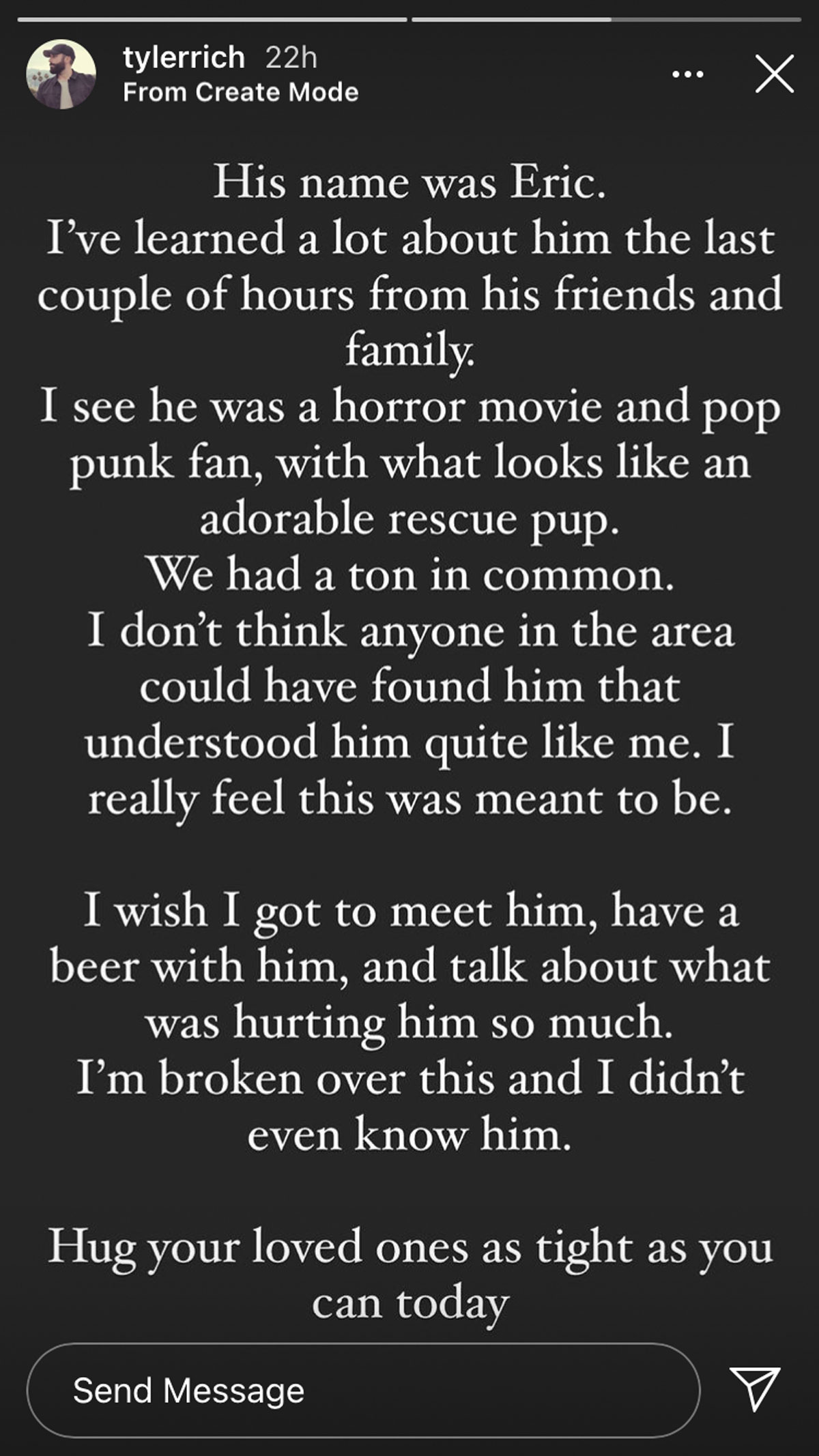 Country music star Tyler Rich had the surprise of his life — and not in a good way — while ending 2020 with one final jog around a park.

The country crooner was running and exercising at a park in Massachusetts on Friday when he came upon the body of a man lying in a wooded area right off the path. At first, the singer thought it was a young, homeless man who was asleep, and he kept running along to finish  his workout.

But something didn’t feel right, as Rich explained in a series of Instagram Stories in which he told the harrowing and horrific tale. So, he circled back around again to check on the man to make sure he was OK — and that’s when he realized something was very, very wrong.

The singer explained what happened next, writing (below):

ALSO READ  MSNBC: How Do We ‘Deprogram’ Millions of Racist, Violent Trump Supporters?

“I realize he isn’t breathing, and as I get around to the front of him, all I see is a lifeless face covered in blood. Everywhere. Looked like maybe shot, or blunt force. At this moment, I freak out and sprint up the steep hill to try and find anyone with a phone to call police.”

A murder? A suicide? No matter what, it’s awful to think about coming up and being confronted with something like that… ugh.

Tyler eventually found a couple walking along the path up ahead and used their cell phone to call authorities. The cops showed up, and he gave his statement to them, and the FBI. Rich eventually revealed that cops went to investigate and found a gun in the guy’s hand, under his body and out of view from Tyler.

As he noted (below), police are leaning towards a potential suicide — though that doesn’t make it any easier for the country singer to grapple with what he experienced;

“It potentially could have been a suicide … Not that there is any type of thing that could help me cope with finding him like this … I’m doing what I can to process this, the image, the reality. It’s been a rough 24 hours … Something I’ll never unsee or forget … He looked like a young, normal kid. Someone with a family probably wondering where he was.”

While police haven’t yet disclosed more information about the death to the public, Tyler lamented the man’s passing with a simple goodbye, writing “whoever you are and were, RIP friend.”

The next day, on Friday, he returned to Instagram to add more information about the man who he found:

And, he also shared a helpful link for those seeking mental health support in their own lives:

So, so critical to have that support system — especially around the holidays.

Our hearts go out to that poor man, and his family, friends, and loved ones, and to Tyler and anyone else dealing with this shocking, unfortunate situation.

previous‘Star Wars’: Chris Pine Calls Patty Jenkins’ ‘Rogue Squadron’ Story ‘Really Great’
nextNicki Minaj Shares New Photos Of Her Son, Thanks Him ‘For Choosing Me To Be Your Mama’