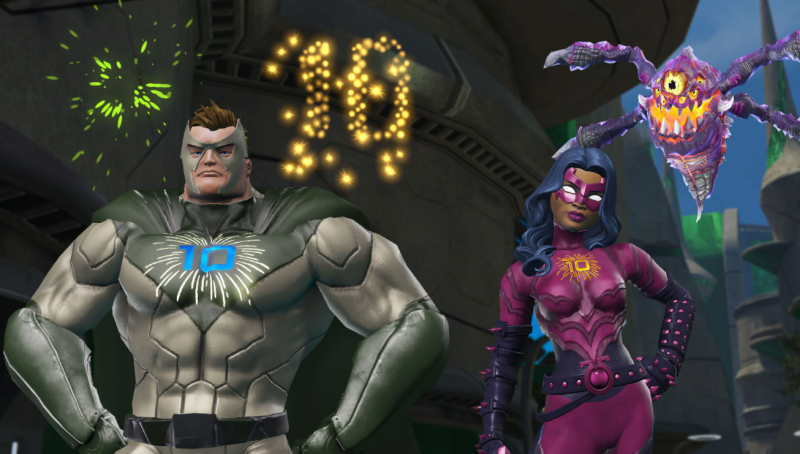 DC Universe Online is celebrating 10 years of its incredible MMORPG experience by gifting players with a few in-game freebies. Earlier this week, Dimensional Ink Games revealed how the studio is giving back to the gamers that have enjoyed the DC Universe experience, starting with an offer of over $50 worth of free loot from now until the end of the month.

What can players expect from the 10 year anniversary celebration? For starters, all players can look forward to a free Character Advance to CR290, a Paradox Gazer combat pet, a new Restored Shim’Tar Regalia-inspired new gear suit, a couple of new 10th anniversary emblems, and two new firework trinkets.

Members will also receive a few additional freebies to celebrate the game’s anniversary, including the following:

To make sure to get all of the Members-specific drops, simply log in before the end of January to unlock the special Member Appreciation Gift Box. Not a member yet? Also included in the anniversary celebration is a special discount on becoming a Member with a 20% discount to join up. You can learn more about the membership incentives right here through the DCUO website.

DC Universe Online first made its debut in 2011 and since then, the community surrounding the comics-inspired adventure has continued to evolve with its players and their love of the game. With over 69,143,146 characters created, DCUO has continuously evolved smartly after going free-to-play.

Take a peek at some other interesting tidbits surrounding the game as the studio celebrates 10 years of the MMORPG experience:

“I’m thrilled to be part of the team and celebrate this incredible milestone for DC Universe Online,” Jack Emmert, CEO of Dimensional Ink, said in a statement. “After reading DC comic books for 45 years, it’s a dream come true to be able to play in DC’s rich multiverse. I can’t wait to see what the next ten years will bring!”

While the game celebrates a huge milestone, there is still more yet to come. It will be interesting to see where the studio takes this online social title next!

Are you a fan of DC Universe Online? Share with us some of your favorite memories in the comment section below!