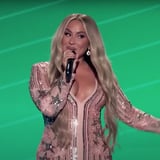 In case you didn’t tune into the People’s Choice Awards on Sunday, we’re pleased to report that Demi Lovato totally nailed her gig as host. The singer opened the award show by delivering a lighthearted monologue that had us and the entire virtual audience cracking up. After reminding viewers that the show’s award winners are decided entirely by the fans, she joked, “Don’t worry, we made sure to count everyone in Pennsylvania’s vote first,” alluding to the battleground state’s role in the outcome of the presidential election.

“I did what everyone else did: I went into lockdown mode and got engaged.”

She went on to discuss the roller coaster that 2020 has been, even mentioning her own breakup with Max Ehrich. “Honestly, this year has been the longest three years of my life. Don’t get me wrong – it started out amazing,” the 28-year-old star said, bringing up her performances at both the Grammys and the Super Bowl. (Yep, those were both, in fact, this year.) She continued, “But then COVID hit, and everything shut down, so I did what everyone else did: I went into lockdown mode and got engaged.” After rattling off a few of her newfound hobbies, including photography, meditation, and painting, she added, “I binged seven seasons of Pretty Little Liars, got unengaged, and then I went looking for aliens in the desert, so basically the same as everyone else.”

Jennifer Lopez Reflects on Her Career as the Icon Award Honoree at PCAs: “I Lead With Love”

As a refresher, Lovato and Ehrich began dating back in March, got engaged in July, and then called off their engagement in September. Watch Lovato address the split in her bold PCAs monologue above, and then join us in admiring the red-hot sequin jumpsuit she wore on the red carpet before numerous outfit changes during the show.