On Sept. 30, it was confirmed that Atreyu vocalist Alex Varkatzas has decided to leave the group and pursue other projects.

At the time, it appeared that the split was amicable. However, it looks like Varkatzas has a few things to say about his former bandmates and Atreyu’s upcoming music.

Read more: Michael C. Hall is rolling out the plastic again for a new ‘Dexter’ series

At the end of September, Atreyu confirmed that the former vocalist was leaving the group.

“We have been a band for over 20 years now,” Atreyu say. “Lived our dreams together as friends and as brothers. We traveled the world doing what we love, and have been fortunate enough to play music for such an incredible fan base that provides us with the opportunity to share our greatest moments with them.”

In the statement, the band say there is “nothing but love and respect” for Varkatzas. Many believed that this meant the split was amicable and both parties are on good terms.

“Now a time of change has come for all of us. Alex Varkatzas is sailing off on a ship of his own, and will part ways with Atreyu. He will not disappear, and neither will Atreyu. There’s nothing but love and respect for each other, and we can’t wait to see what he will come up with next. Stay tuned for his upcoming projects and we all wish him success and fulfillment with all his future endeavors. Atreyu’s next adventure is among us. We love you, we’ll see you shortly.”

Varkatzas also released a statement and video thanking Atreyu for all of the years they had together and the music they created.

“After 20 rewarding years of creating music with Atreyu, the band and I are parting ways,” his statement says. “I am forever thankful for the memories, experiences, and friendships made along the way. Thank you to all of the friends and fans. I have lots of new music and art to share with you in the future. With love and respect.”

Official statement -“After 20 rewarding years of creating music with Atreyu, the band and I are parting ways. I am forever thankful for the memories, experiences, and friendships made along the way. Thank you to all of the friends and fans. I have lots of new music and art to share with you in the future. With love and respect.”

Now, it looks like things may not have gone down as well as fans may have hoped. This week, Atreyu began teasing their new song “Save Us” which arrives on Friday, Oct 16. The band completely wiped their Instagram page and shared two separate teaser videos.

However, shortly after sharing the second video, fans began to notice Varkatzas posting some comments on his Instagram story. Although Varkatzas doesn’t blatantly say his comments are about Atreyu’s new song, the timing of them have fans speculating that they are directed toward his former band.

Many believe that he is warning Atreyu fans that their new song is “fake heavy.” As well, listeners should “just wait and see” what he has in store with his new music. 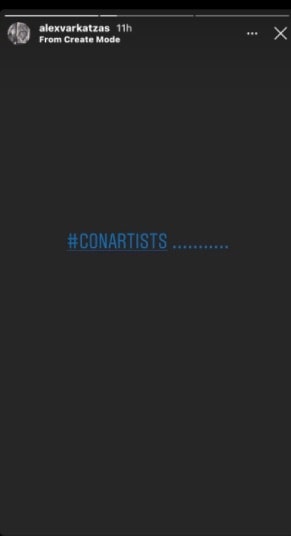 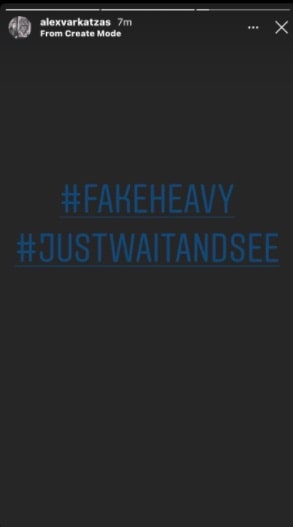 Varkatzas is clearly trying to distance himself from his former band. He recently updated his Instagram bio to say “I AM NO LONGER IN OR AFFILIATED WITH ATREYU.”

Back in August, Varkatzas expressed his desire to start a new metal project amidst rumors he was leaving the group. He said he wanted to be in a “super heavy metal band” with “some sick Swedish riffs” and “super heavy breakdowns.” His comments could have meant that he no longer liked Atreyu’s music.

I need to shred bro. I’m thinking blood has been shed , meets a little in flames , with a bit of the old Lamb of freaking god thrown in on top. Maybe an ep? Maybe a full length? I need to crush! I miss high fives and stage dives. These should be interesting comments … go!

What are your thoughts on Alex Varkatzas’ comments? Let us know in the comments below.

October 15, 2020
It seems one of Hip-Hop’s most high profile couples have patched up their issues. Cardi B has confirmed she is officially back with Offset. As spotted on Rap-Up the Bronx Bombshell is once again claiming the Migos rapper as her one and only. Last week she was seen celebrating her birthday and all signs pointed to […]
October 15, 2020
Bob Dylan is dipping his toes in the Hollywood waters again.

The singer-songwriter will produce Calico Joe, which is a 2012 book by John Grisham about a Chicago Cubs phenom from the 1970s whose life is changed after a near-fatal pitch. The story will chronicle all involved — the batter, the pitcher and the…

High-powered punks Anti-Flag recently celebrated the release of their documentary, Beyond Barricades: The Story Of Anti-Flag. Over the course of nearly three decades, the Pittsburgh-based punks have opened ears, eyes and hearts across the world with their political consciousness. While their tenure in the punk scene is certainly noteworthy, we asked them to weigh in […]

The post There’s one ’70s punk-rock icon that Anti-Flag all agree is a badass appeared first on Alternative Press.

October 15, 2020
Irish quartet Inhaler dropped the single, “When It Breaks,” an anthem recorded over the summer with lyrical themes addressing the unease and disquiet of 2020.

“The lyrics and the music communicate the anxiousness of how we were all feeling and still are now a couple months later. It’s our interpretation of this strange…

For all of you spicy food lovers out there, there’s a new spicy challenge for you to attempt. Dunkin’ is cranking up the heat with its new Spicy Ghost Pepper Donut. The strawberry-iced donut is unsuspecting at first. However, it truly packs a punch with its sprinkles of ghost pepper and cayenne. Read more: Here’s […]

The post Dunkin’s new Halloween donut is already getting turned into a prank appeared first on Alternative Press.

October 15, 2020
Bon Iver frontman Justin Vernon launched his  “Visit With Vernon” voting initiative with his Eaux Claires last month to “talk thoughtfully about why voting matters” and in the second installment, where he sat with two new Milwaukee voters, he performed a new Big Red Machine song titled “Latterdays.”

The singer-songwriter says the tune…