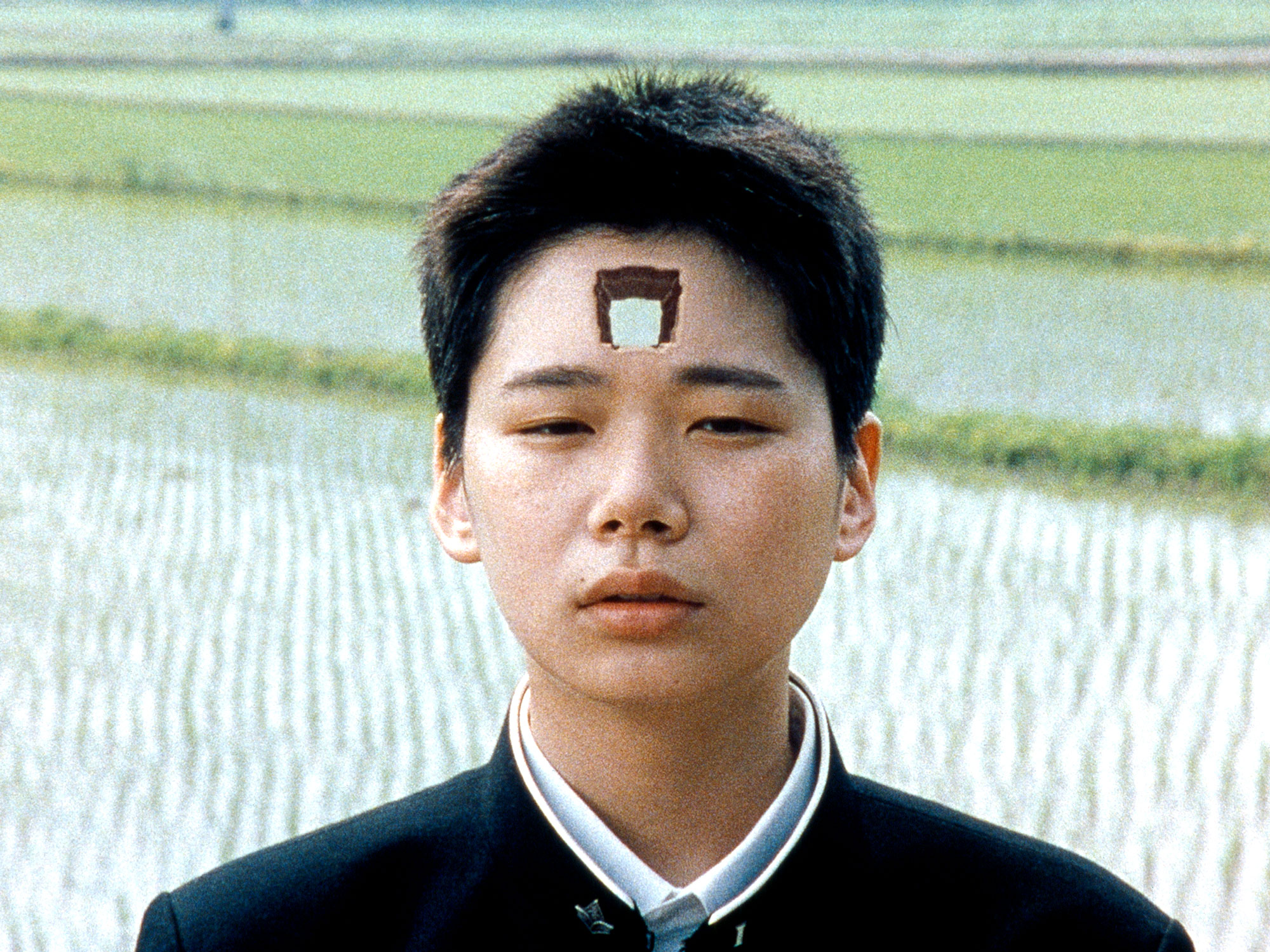 Schoolboy Hajime (Takahiro Sato) runs panting across a rice field, but misses the train carrying away forever the girl from his class whom he loves but has never had the courage even to address. The wide shots and rural setting (Tochigi Prefecture, north of Tokyo) might suggest that The Taste of Tea represents a classical mode of Japanese cinema, as might the subsequent omnipresence of cherry blossoms, the focus on a family, the passing train (a recurring motif in the films of Yasujirō Ozu), the gentle pace, and even the film’s simple, calming title.

But then, as Hajime sadly watches the train recede into the distance with all his romantic aspirations on board, a second, 3D-animated train snakes out of his head into the cloudy blue sky with a miniature, waving version of the girl at its window, leaving a square, train-shaped hole in the boy’s forehead, and we are aware that what we are watching is a long way from Ozu.

In its leisurely way, The Taste of Tea follows the Harunos, a clan whose individual and collective peculiarities ensure that the film never conforms to the clichés of a classic family drama. His heart quickly mending, shy Hajime transfers his distant affections to newcomer Aoi Suzuichi (Anna Tsuchiya, Kamikaze Girls, Sakuran), and manages to get closer to her via the suitably strategic game of go. Hajime’s little sister Sachiko (Maya Banno) is haunted by a gigantic doppelgänger of herself that constantly watches her.

Sachiko painstakingly tries to rid herself of the ghostly double through a form of exorcism that involves, well, exercise, after hearing a childhood story of a vaguely similar haunting told by her visiting uncle Ayano (Asano Tadanobu), who is now awkwardly revisiting a past, unresolved love.

The children’s mother Yoshiko (Satomi Tezuka) tries to juggle her home life with a career in animation – an art that she has inherited from her father Akira (Tatsuya Gashuin), a once famous animator who is now ageing eccentrically in a room adjoined to the house and working on a covert project. Yoshiko’s disaffected-seeming husband Nobuo (Tomokazu Miura) works as a hypnotherapist in the city, helping others find their happy place, even as he has secretly found his own.

The Harunos are central to The Taste of Tea, but while the film is full of incidents, most of these are digressions, feints and sketches, making it difficult to pin down a narrative core to this family portrait. The film’s form is similarly unstable, incorporating into its live action ghosts, digital effects, giants, singing, dancing, dream sequences and animation even as this rustic setting is made to accommodate cross-dressing schoolboys, yakuza, kickass office assistants, tokusatsu cosplayers and a cannibalistic ‘jungle woman’.

Perhaps the best way of approaching the aesthetic of a film whose main characters are either artists or at least operating in the imaginative sphere is to look at what they themselves say about art. When Akira’s other son, the manga artist Ikki Todoroki (played by Ikki Todoroki), mixes a bizarre song-and-dance number with his second assistant and his father, one of the sound engineers says of the performers, “They’re like perverted aliens from some unknown world,” while Hajime says of the song, “It’s more cool than weird, and it stays in your head.”

These reactions might equally serve as descriptions of The Taste of Tea, which bridges the gap between writer/director Katsuhito Ishii’s previous Tarantino-esque ensemble capers Shark Skin Man and Peach Hip Girl and Party 7, and the out-and-out freaky surrealism of his subsequent Funky Forest (co-directed with Hajime Ishihine and Shunichiro Miki). Here, while there are multiple characters and all manner of oddball excursions, everything is anchored in a gentle, affectionate view of a household whose members are ever so slowly finding themselves. The tea that everybody drinks is warm and restorative, and so is Ishii’s strange, sentimental film.

The Taste of Tea is available on Blu-ray – for the first time anywhere in the world – from Third Window Films on 5 October.

Warning: contains major plot spoilers for His Dark Materials season one. His Dark Materials had so much world-building to do in season one that it took a little while to get moving. Once off the ground though, the BBC/HBO fantasy soared. By the time the story had landed in the Far North, a place of armoured […]

The post His Dark Materials Season One Recap: Dust, Daemons and Betrayal appeared first on Den of Geek.