DO NOT Take Money Advice From Mila Kunis! She Gave Ashton Kutcher S**t For Investing In Uber & Bitcoin! 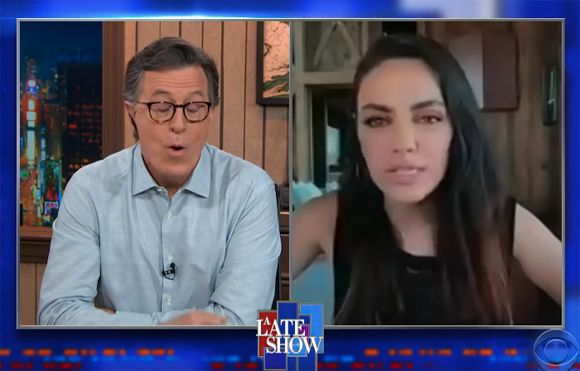 We never thought we’d say this, but sometimes you really should just ignore your spouse. LOLz!

Like if you’re married to Mila Kunis and the subject is investing money, for example, as she basically said so herself this week.

In case you didn’t know, Ashton Kutcher is an avid investor, often getting in on the ground level with tech startups. He’s invested in Airbnb, Spotify, Soundcloud, Robinhood, Airtable. He may not have found much success with film critics over the past decade, but when it comes to investing his money, we don’t think any other star comes close to his earnings.

So when Mila stopped by The Late Show on Thursday, it made sense Stephen Colbert was curious about her involvement with the old portfolio. Does the Dude Where’s My Car? star run these things by her?

He actually does, she explained, from even back when they were just dating. But then, you know, he sometimes completely ignores her — and therefore doesn’t lose out on millions of dollars! The Bad Moms star explains:

“This happens nightly. The sad part is it happens probably too often. The best part about him is he’s really smart about including me in everything and making sure I’m aware of everything that’s happening. He’s also really smart at knowing sometimes you shouldn’t listen to your wife.”

Mila prefaced these stories by saying she’s given him good advice about consumer goods to invest in as she has good “gut instincts” about those and also keeps her ear to the ground on mommy blogs. But when it comes to some of the more tech stuff? Not so much…

One very early investment opportunity he told her about “early into” their relationship? Uber. She recalls:

“My dad in real life is a cab driver — was a cab driver, he’s retired now — so I grew up on tips from a cab driver. So he’s like, ‘There’s this company. It’s kind of like a cab company, but anybody can drive a cab. I was like, ‘That’s the worst idea ever. Why would you…?’ And he was like, ‘Let me get you this thing. It’s called Uber. Let me just order it for you. You can test it out.’ And I was like, ‘You’re going to put me in a car with a stranger? What is wrong with you?’ I was furious at him.”

Ha! If we’re being honest it hasn’t always felt like the smartest idea, even after it caught on. But catch on it did — the company became huge, as we’re sure you don’t need us to tell you as you read this on your phone while being driven home from work! LOLz!

“He’s like, ‘Hey, babe, I’ve got to explain this thing to you. Tell me if I’m crazy.’ And I was like, ‘Cool, what is it, babe?’ He was like, ‘There’s this thing. It’s like mining for money. It’s called cryptocurrency. It’s called Bitcoin.’ This was eight plus years ago.”

Eight plus years ago?

Colbert’s face at learning Ashton and Mila invested in Bitcoin eight years ago is, ironically, priceless.

At the beginning of 2013, the price of Bitcoin was a meager $13.40. While the price of the cryptocurrency has been up and down, it always seems to trend upward. Its current price as of Thursday when the interview was filmed? $53,332.

So if they got in at the beginning of 2013, an investment of just $10k would now be worth about 4 MILLION dollars. And they had That ’70s Show money, so we’re guessing they might have invested a bit more…

Mila at least knows now how good her hubby is at this. She says:

“My husband’s really smart… There’s companies all the time that he’ll talk about that to me seem so ludicrous. ‘Why would I want to sleep on someone’s couch and pay for it?’ It’s ludicrous and yet here we are. I Airbnb everything, I Uber everywhere, and I use cryptocurrency. So guess what? I’ve never been happier to be wrong.”

We bet! LOLz! Ashton’s estimated net worth is thought to be in the neighborhood of $200 million. Wow.

Ch-ch-check out the full interview (below)!

The post DO NOT Take Money Advice From Mila Kunis! She Gave Ashton Kutcher S**t For Investing In Uber & Bitcoin! appeared first on Perez Hilton.