Flying Lotus Says EP With MF DOOM Was In The Works 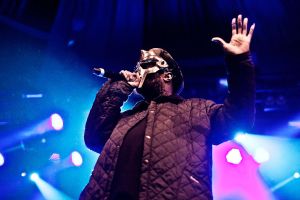 With the news of MF DOOM‘s passing still rocking the core of his fans around the world, there might be some hope that new music will surface down the line. Flying Lotus confirmed to a fan that he was working on an EP with the late, legendary wordsmith via Twitter.

As the world attempted to process the death of MF DOOM, real name Daniel Dumile, fans on social media shared their favorite verses, and those who knew or worked with DOOM personally also shared factoids. However, an exchange between a fan hopeful for some new collaborations between FlyLo and the Supervillain led to the revelation that has everyone stoked to hear more.

After sharing the track “Lunch Break” from the FlyLo FM playlist from Grand Theft Auto V playlist, a fan dreamed aloud of a full-length project between the pair. Flying Lotus responded on New Year’s Eve with, ” hate to say this but we were actually working on an EP. There were more songs that I haven’t even heard.”

Whether or not these songs will see the light of day would have to be a decision made by the Dumile family to release that product. Of course, it is far more important that the life and legacy of MF DOOM are upheld more than the grubby hands of music listeners expecting more music.

I hate to say this but we were actually working on an EP. There were more songs that I haven’t even heard. https://t.co/i3772B7bDS