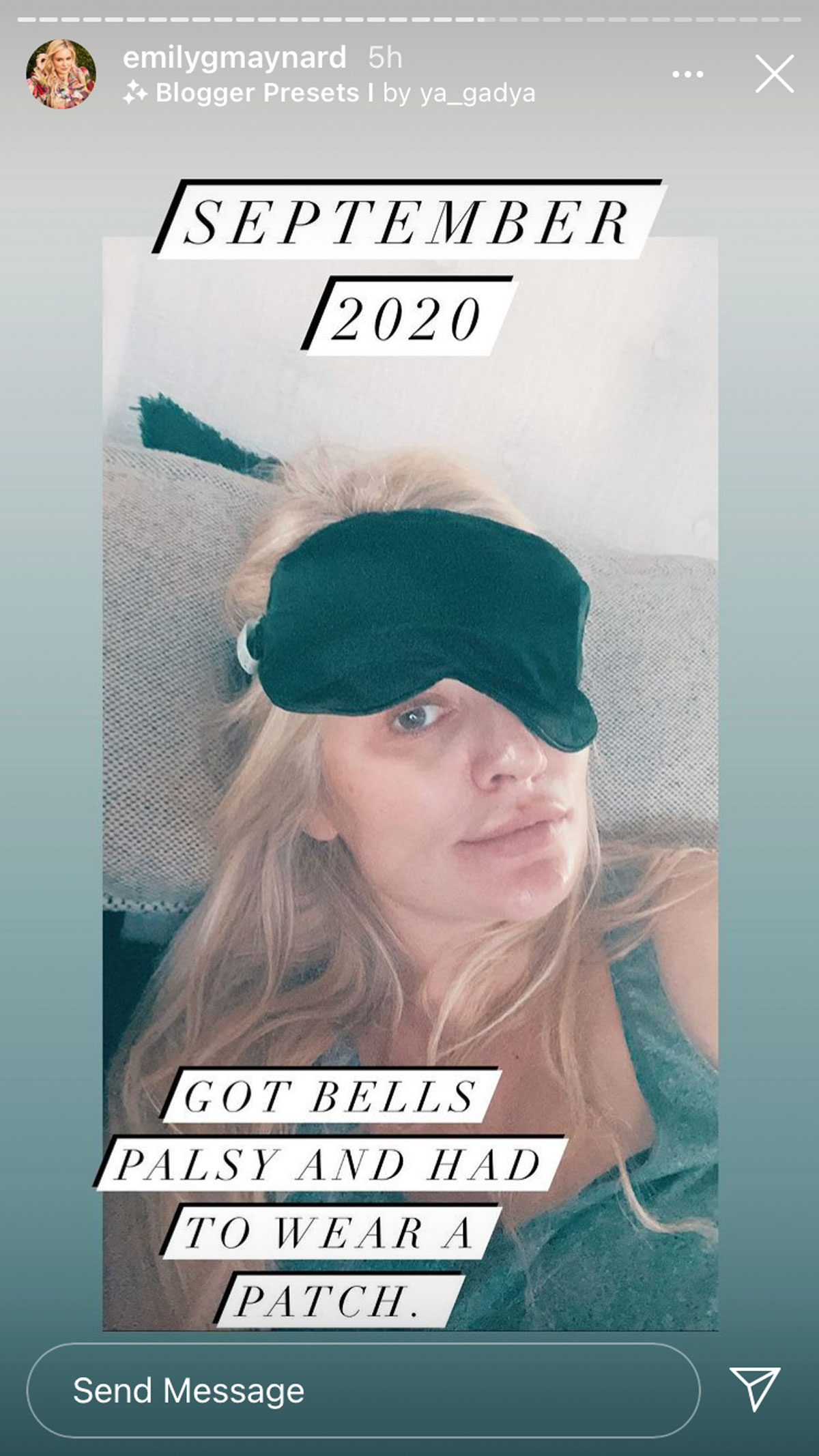 This was certainly unexpected!

Former Bachelorette Emily Maynard Johnson revealed late Thursday that she was diagnosed with Bell’s Palsy earlier in 2020 — a condition she has never before publicly discussed.

The young mom revealed the diagnosis in a series of Instagram Stories posts she made to her account during the day on Thursday. Most of the stories included highlights from the year, including her surprise pregnancy and childbirth that she managed to keep a secret for much of the year, along with plenty of family highlights with her children and husband Tyler Johnson as they waited out the coronavirus pandemic in quarantine at their beautiful home.

But along with all that, Maynard’s Bell’s Palsy announcement stood out, and she showed off a snap of her wearing an eye patch as part of her diagnosis and its aftermath back in the fall:

According to Healthline, Bell’s Palsy is a condition that causes a “temporary weakness or paralysis of the muscles in the face.” It’s not immediately clear what cause Emily’s diagnosis in the first place, and at this point, we have no indication of how (or if) she may have fully come through it, either.

It’s interesting, because she even takes some follow-up time during that IG Stories series to explain her decision behind keeping her pregnancy under wraps, as you can see (below):

But with the Bell’s Palsy diagnosis, she was mum — nothing else said other than that first slide we showed (above). Obviously, considering it’s a temporary issue for most people, anyways, we’re hopeful that it was so for Maynard and she got back on with her life soon enough afterwards, anyways!

Related: Emily Maynard Opens Up About Previous Serious Suicide Attempt As A Teenager

Obviously, 2020 was a strange and formative year for all of us, in so many ways — clearly, Emily here included. Here’s hoping that things got back to normal very quickly for her! And we wish her and her family only good health and happiness from here on out… goodness knows we all need a little bit more of that in this day and age!

Reactions, Perezcious readers? Sound OFF with your take on everything down in the comments (below)…

The post Former <i>Bachelorette</i> Emily Maynard Reveals She Was Diagnosed With Bell’s Palsy In 2020 appeared first on Perez Hilton.

previousJa Rule Calls 50 Cent ‘King Of Cap’ For Alleging He Paid $3,000 To Have His Concert Empty In 2018
nextWatch: WandaVision Promo Teases A Visionary New Era For The MCU