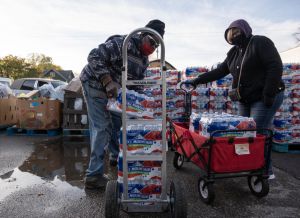 Justice has been a long act of patience for residents of Flint after the water crisis scandal the rocked the proud Michigan city. Earlier on Tuesday (Jan. 11), it has been reported widely that former Gov. Rick Snyder and other connected individuals will face charges this week after a 2019 probe revealed misdoings on the administration’s part.

The Detroit News reports that Snyder, aide Rich Baird, and health director Nick Lyon have been informed that they will be brought up on criminal charges according to sources close to the outlet. Up to 10 members of the administration, including Snyder himself, will be indicted this week, possibly as early as Thursday. The charges stem from an investigation launched in 2019 by Attorney General Dana Nessel, after the dire situation in Flint was seemingly ignored by state and national officials.

The water in Flint, a predominately Black city, was so contaminated that an outbreak of Legionnaires’ disease ravaged residents during Snyder’s tenure in 2014 and a portion of 2015. As of now, it isn’t directly known what charges Snyder and the other individuals will face but all signs point to a sweeping indictment of the handling of the crisis by members of Snyder’s circle.

“It’s an ongoing investigation,” Attorney General’s office spokeswoman Courtney Covington said in a statement earlier. “The team is working diligently, though and we do hope to have an announcement on the status of that investigation soon.”

Synder’s attorney called the Attorney General’s impending charges “outrageous” and doesn’t believe his client will be brought up on charges. The attorney also believes that the charges are politically motivated.

Snyder was a Republican two-term governor who left office in 2019.