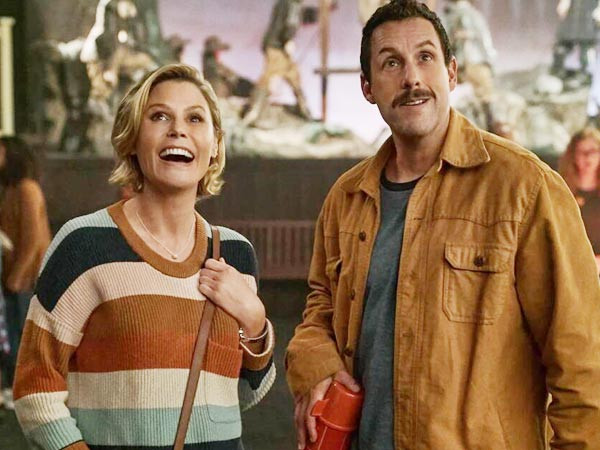 Adam Sandler has made a career out of playing weirdo characters with goofball accents. His characters are shown to be dumb but they do provide you with a life-lesson in the end. That’s a hallmark of all his films and Hubie Halloween is no exception. We were expecting him to do something different after the insanely clever and funny Uncut Gems (2019) but after segueing into thriller territory, Sandler is back in his familiar turf. He played it safe and the gamble worked in his favour as early trade reports are calling it one of the most successful Adam Sandler films ever.

The film is set in Salem, infamous for its witch trials held in 1692. Given its history, the place has become the Halloween capital of sorts for America, a point that the film emphasises on time and again. Hubie Dubois (Adam Sandler) believes that one of his ancestors stood up for the women accused as witches. That bit of family history has gone to his head and he considers himself the town’s safety monitor during Halloween. He’s the butt of jokes around the neighbourhood and people often take out their frustration on him by throwing different objects — from eggs to kitchen sinks — when he makes his rounds on his trusted bicycle. Over the years, he has learnt to dodge most of the missiles and developed a thick skin for most of the jokes. Two people in town have come to recognise his inner goodness. One is his own mother (June Squibb), who has a habit of wearing T-shirts with inappropriate messages on them, and the other is Violet Valentine (Julie Bowen), who has been his crush since childhood. Violet really likes him and would like to go out with him but Hubie never takes the hint. An escaped inmate from a mental asylum is said to have arrived in Salem and is reportedly targeting people over Halloween. Hubie takes upon himself to save his town and its denizens and thereby wins everyone’s respect, and Violet’s love, in the process.

The film is teeming with oddball characters. Ray Liotta’s character, who has recently lost his father, isn’t averse to playing pranks or to wearing a giant rainbow-coloured clown wig, Rob Schneider plays an escaped inmate who is a serial urinator, Steve Buscemi’s character suffers from fake werewolf disease and Shaquille O’Neal acts as a radio host having a sexy effeminate voice. Beneath all this goofiness, the director does get one of two anti-establishment shots — like the town Mayor refuses to pull a plug on the proceedings because that’ll mean a loss of revenue even when people are reported missing. And the TV companies gleefully scrambling to cover people being burnt at stake for the sake of TRPs. But on the whole, the film is as lowbrow as they come.

While Hubie Halloween is the classic underdog story, Hubie isn’t someone who miraculously gets transformed into a hero. Rather, the townspeople accept his eccentricities when they come face to face with their own quirks and finally begin to see the real person beneath the flaws. The film’s underlying message is that nobody’s perfect and the more we recognise it, the better it’ll be for all of us. Also, we should be more forgiving and more caring towards one another. Halloween isn’t Christmas but Sandler and his director Steven Brill have made it all Christmassy. They could have made a decent slasher comedy but feels like they decided against the gore at the last minute, toning down all the horror elements.

READ  How Photoshop Artistic Filters work, with examples of our favorites

In a nutshell, Hubie Halloween is a regular Adam Sandler movie — good for a few laughs but something that won’t make for a great cinematic memory in the long run.

October 27, 2020
Four years ago, the Big Three broadcast evening newscasts tried to destroy Donald Trump’s 2016 presidential campaign with historically negative press coverage. This year, those...
October 27, 2020
Months back, MTO News reported that Peter Gunz had been tapped as the new host for the popular reality television show, Cheaters -- but social...
October 27, 2020
Apple’s latest collection of phones is here and it is no surprise that the pricing on offer is by no means cheap. So, if you’ve...
October 27, 2020
The evolution of entertainment across the digital realm has brought engaging and relatable content to everyone across the country. It has paved the way for...
October 27, 2020
LisaRaye McCoy announced the launch of her OnlyFans last week, and rapper Meek Mill expressed that he was interested in the VIP package -- which...
October 27, 2020
The loss after tax for the July-September period, helped by a slow recovery in oil demand and steadier prices, compared with a net loss of...