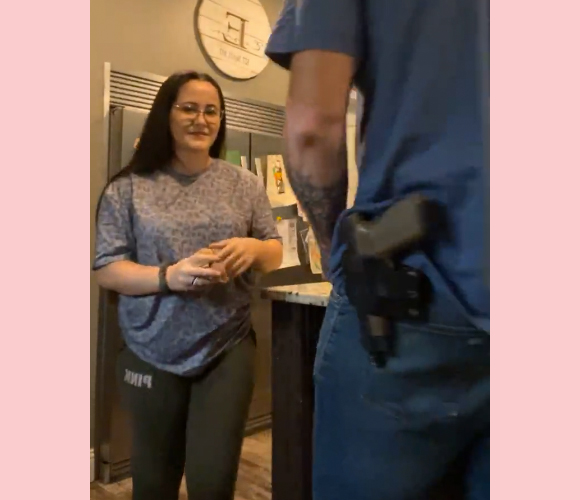 Doesn’t Jenelle Evans get tired of explaining away her man’s alarming behavior?

The Teen Mom 2 alum’s husband David Eason has had his fair share of controversies, ranging from upsetting to actively dangerous. This time around we’d say his behavior definitely falls under both categories: during Jenelle’s Instagram Live, he was seen packing heat while unpacking the family’s groceries.

She opened the video by telling her husband to “take that thing off,” presumably referring to the gun strapped to his hip. Eason replied:

Says the man who’s had to change IG accounts like three times just since we’ve known he existed.

“So, TikTok just kicked me off of my Livestream video, ‘cause they said something in my video was controversial. I don’t know.”

At this point, Eason smirked and chimed in, “I know” — seeming a little too comfortable with the fact that he got his wife booted off the social media platform, if you ask us. (Remember when he got her fired from MTV too? He’s a real keeper, that one!)

Anyway, the controversy this time was Eason wearing his gun just casually around the house while around the very young kids — something many of Jenelle’s fans were extremely upset by. Especially given the man’s proclivity for violence…

Later in the livestream, the reality star explained to questioning fans:

“Yeah, David carries all the time. It’s an open carry state here unless you have a concealed weapon permit. We don’t, we haven’t taken the classes for it yet.”

…ALL the time? Even around their own house? Even when spending time with his kids? David clarified with another charming aside:

“Unless I’m sleeping, then it’s on the nightstand.”

We get it, you love your gun! Jenelle added:

“David carries all the time, I mean no matter what store we go in. We just got home so, of course it’s on his hip. He has a holster on his belt.”

Unsurprisingly, fans weren’t convinced by these feeble explanations. Some of the comments included:

“Ya, real important to be packing heat when you’re in your own home putting groceries away. Whatever makes you feel like a big man, I guess.”

“I am so baffled, but then again who knows there might be a small breed dog in the shopping bag who needs to be shot”

Still, despite the staggering amount of red flags with this guy, the 28-year-old claimed things are going well in the Evans-Eason household. She shared:

“I feel like me and David get along a lot better now than we ever have honestly … y’know, when people say the first year of marriage is rough, it really is. And you don’t think it’s going to be, but y’know, you get past it, and if you stay together, you get stronger. And I feel like that’s what happened to us. I feel like we understand each other better now, and we communicate a LOT better than before.”

Well, we’re glad to hear it — and we just hope Eason’s behavior doesn’t escalate any further than what we’ve already seen…

Ch-ch-check out the full vid (below):

The post Jenelle Evans Responds After Fans Are SHOCKED To See David Eason Carrying A Gun Around His Children appeared first on Perez Hilton.