Jenna Fischer and John Krasinski on Jim and Pam’s First Kiss: “My Stomach Was in Knots” 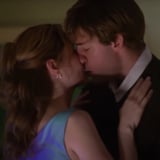 " title="
Jenna Fischer and John Krasinski on Jim and Pam's First Kiss: "My Stomach Was in Knots"
" loading="lazy" />

Not even 1,000 soft pretzels could compete with the love I have for Jim and Pam’s relationship on The Office. (OK, maybe 1,001.) Over 15 years later, their first kiss is still one of the most loved moments in Office history, and on Jan. 9, Peacock shared a special behind-the-scenes interview with Jenna Fischer and John Krasinski, revealing that the picture-perfect moment was even more romantic than we thought.

“My stomach was in knots. . . They cleared everyone off the set. The cameramen were hidden. We couldn’t see them,” Fischer explained before Krasinski added, “Which is what they do for like big nude scenes, and it was really wild. It was very quiet, the lights were really dim, and you felt like something intense was happening . . . We both were just really nervous.”

“The whole set up was very quiet and intimate, and it really felt like a stolen moment between two characters.”

Following Jim’s famous “I love you” admission in the parking lot, Pam goes back to the office to call her mom and ask for advice. During the call, only one cameraman was present and hidden behind a door to make the scene feel more intimate. “The first time that I saw John was when he walked in the room to do the scene,” Fischer said. “So, my first glimpse of him was as he walked through the door as Jim and came up and kissed me . . . The whole set up was very quiet and intimate, and it really felt like a stolen moment between two characters and I think that’s why it worked so well.”

ALSO READ  Bachelor Villain Victoria Is Universally Hated—But How Far Does She Make It on Matt’s Season?

In addition to being alone together in a dimly-lit room, part of what made the scene so intense for Krasinski and Fischer was that they were just as invested in their characters’ storylines as fans watching from home. “What people don’t realize is that Jenna and I were as nervous to do that and find out about it,” Krasinski said, commenting on the future of Jim and Pam’s relationship. “We were dying to know how they were going to end it. We didn’t know how it was gonna happen, when it was gonna happen, under what circumstances. It was really, really fun to do.”

The Office Just Unearthed Tons of Never-Before-Seen Bloopers and Footage, and Oh My GOSH

As nerve-wracking as it was, the scene – which has now been seen by millions of fans – was totally worth it, if you ask us. See the full clip above to hear more from Krasinski and Fischer about what it was like to prep for one of Jim and Pam’s most memorable onscreen moments.