By Sophie Tanno For Mailonline

A gotwit has broken the world record for non-stop bird flight with an epic 7,500-mile journey from Alaska to New Zealand.

The bird, known as a bar-tailed godwit, arrived in New Zealand 11 days after setting off from Alaska, without pausing for food or drink.

Scientists were able to track the bird’s journey by securing a satellite tag on its lower back.

The bird’s aerodynamic build was compared to that of a ‘jet fighter’ by Dr Jesse Conklin from the Global Flyway Network, who studies the migration of birds.

‘They have an incredibly efficient fuel-to-energy rate,’ Conklin told The Guardian.

‘They have a lot of things going for them. They are designed like a jet fighter. Long, pointed wings and a really sleek design which gives them a lot of aerodynamic potential.’

She added that the birds ‘seem to have some capability of knowing where they are on the globe.

‘We can’t really explain it but they seem to have an onboard map.’

The godwit left Alaska on September 16 after feeding on clams and worms for two months, alongside four other birds.

It flew at speeds of up to an impressive 55 mph, heading south over the Aleutian Islands and arriving in a bay near Auckland on September 27.

Male bar-tailed godwits are able to double in size before a long flight but can shrink their internal organs to lighten the load during the journey. 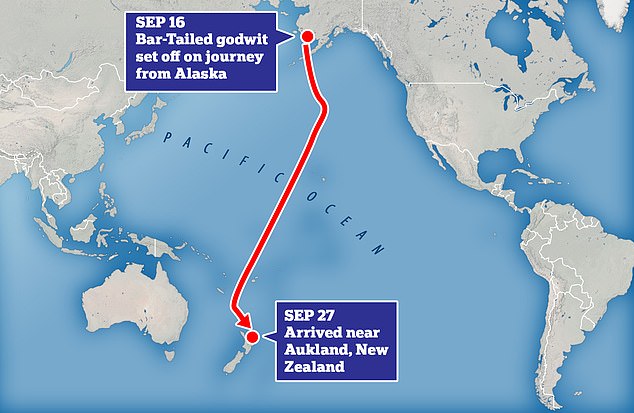 The journey has an estimated point-to-point distance of 7,987 miles, but scientists believe that taking errors into account, it would have been closer to 7,500 miles.

It breaks the previous world record for a non-stop bird flight from 2007, when a female shorebird was found to have flown 7,145 miles from Alaska to New Zealand.

The four birds were among a group of 20 that were tagged on the North Island of New Zealand last year.

They are expected to begin their return flight in March where they will stop off for a month at the Yellow Sea to feed before returning to Alaska.

Bar-tailed godwits weigh on average between 230g to 450g and have a wingspan of 70cm to 80cm. Fully grown bar-railed godwits measure between 37cm to 39cm in length.

All bar-tailed godwits spend the Northern Hemisphere summer in the Arctic during breeding season, before making a long-distance migration south in winter to more temperate areas.

Their migration paths vary, with some travelling only as far as the North Sea while others migrate as far away as India.

Bar-tailed godwits nesting in Alaska travel to Australia and New Zealand in what is the longest non-stop migration journey of any bird.

October 16, 2020
Two radical left-wing organizations are trying to “remove bias from black family narratives in the media,” according to Variety, and they've put together a handy...
October 16, 2020
Slim Thug took to Instagram to blast "soft" men who are afraid to like photos of women on Instagram -- he says he will never...
October 16, 2020
James Dielhenn Senior Boxing Journalist @JamesDielhenn Saturday night at 7pm live on Sky Sports – Ritson vs Vazquez Last Updated: 16/10/20 1:52pm Lewis Ritson vs...
October 16, 2020
As Jesse Williams and his ex-wife Aryn Drake-Lee finalize their divorce, a judge has ordered that the actor pay Aryn $40,000 a month in child...
October 16, 2020
Samsung’s Galaxy S30 has once again passed through China’s 3C. The new listing sheds light on the phone’s possible charging speeds. Those hoping for faster...
October 16, 2020
The political-insider website Axios published a story Wednesday headlined, “Joe Biden is the luckiest, least scrutinized frontrunner.” Mike Allen and Hans Nichols declared “Eight months...