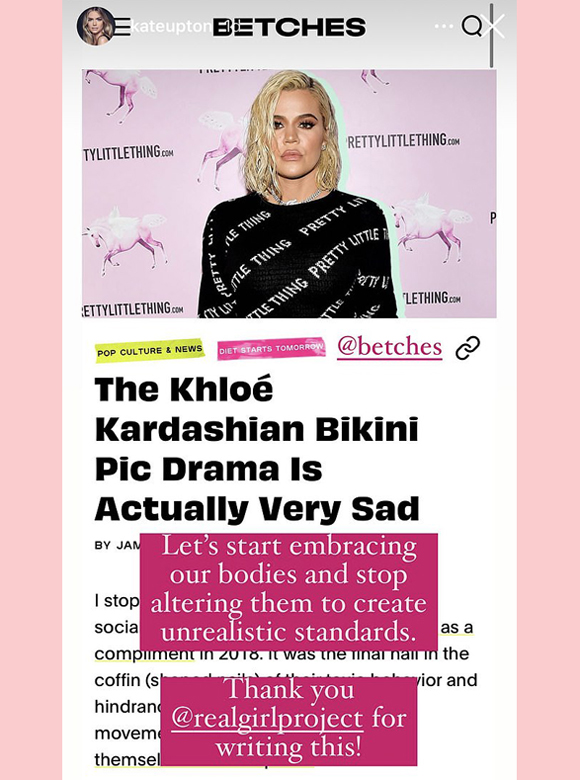 In case you somehow missed it, Khloé went viral this week when it came out that the Kardashian team (and possibly even Kim Kardashian herself) were sending out requests — and maybe even legal threats — trying to remove all traces of a poolside photo some assistant took of the KUWTK star and posted temporarily on social media.

What was wrong with the pic? Was it like one of those infamous unflattering Beyoncé concert face ones? NOPE! It was a posed, toned momma who looked fantastic in her bikini. But it didn’t have enough photoshop/filtering/etc that Khloé normally puts on her pics, and she decided that was NOT good enough to be out there on the internet.

Obviously trying to erase the pic only drew way more attention to it (the Streisand Effect, hello!), and soon the whole thing blew up into another classic Kardashian kontroversy.

However, this time Khloé was anything but cryptic as she got right in front of it on her Instagram. Posting a video of her nude body in front of a mirror, she then wrote an emotional essay about her history of body confidence issues from being called “the ugly sister” for years.

“It’s almost unbearable trying to live up to the impossible standards that the public have all set for me.”

And admitted she uses “a good filter, good lighting and an edit here and there” to try to make herself look that much closer to “perfect.”

“The same way I throw on some make-up, get my nails done, or wear a pair of heels to present myself to the world the way I want to be seen and it’s exactly what I will continue to do unapologetically. My body, my image and how I choose to look and what I want to share is my choice. It’s not for anyone to decide or judge what is acceptable or not anymore.”

Well, not everyone agrees.

Kate Upton shared her own thoughts on the controversy, shading the reality star by writing:

“Let’s start embracing our bodies and stop altering them to create unrealistic standards.”

She seems to be of the opinion it isn’t the public who set the “impossible standards” but those who present endless altered pics — like Khloé and her family — who are doing that.

Giving more insight into that way of thinking, the Sports Illustrated model called attention to an article in Betches in which writer Jamie Feldman called B.S. on Khloé’s entire body positivity defense.

The scathing article, entitled “The Khloe Kardashian Bikini Pic Drama Is Actually Very Sad,” contends that what Khloé is doing in response to this photo is actually devastating to the body confidence of millions of women. She writes:

“Look at that photo and you’ll see what we have been conditioned by society and media to believe is the ideal body: a flat stomach, curves in the exact right places. These are things that I — and most people — don’t have! And yet she is so ashamed of it, writing on Instagram that it ‘doesn’t capture your body the way it is after working so hard to get to this point’ with its non-Barbie doll smoothness…”

Feldman argues what Khloé is really saying is that a photo of a great-looking woman with a killer body — presented how it ACTUALLY looks without retouching impossible perfection — isn’t enough. So what are all the women who don’t look nearly so fit and healthy as her supposed to think about their own bodies?

“The message being sent to millions of young (and not-so-young) women who look up to her and her sisters is that this more-than-acceptable body is simply unacceptable.”

The author also pointed out kontradiction in Khloé’s messaging, considering her Good American brand literally touts itself as “representing body acceptance” in its company bio:

“She wants to be a champion of body diversity — just not when it comes to her own body.”

Looking at the images Khloé did choose to share drums up toxic feelings, too.

Finally, Feldman went after the supposedly untouched images Khloé was willing to share of her body in her big response post:

“Despite knowing that they’re likely doctored… there’s a small part of my brain that’s jealous of the woman in this image, with her flawless skin and exposed rib cage. As long as we continue to glorify images like this one, and these women in general, the longer it will be before shifting beauty standards and healthier relationships with our bodies will trickle down to us, the masses.”

Ouch! What a scorching take! Thanks so much to Kate Upton for sharing or we might never have seen it!

What do YOU think, Perezcious readers? Was Khloé defending body positivity here? Or defending herself at the cost of the movement?? Let us know where you land on this controversy in the comments (below)!

ALSO READ  Confirmed: Ellen DeGeneresâ talk show to come to an end
previousCharlyne Yi Opens Up About Working On The Disaster Artist, Calls James Franco A ‘Sexual Predator’ & Seth Rogen An ‘Enabler’
nextLil’ Durk Shows His Girlfriend India Royale Love On Twitter
This website uses cookies to improve your experience. We'll assume you're ok with this, but you can opt-out if you wish. Cookie settingsACCEPT
Privacy & Cookies Policy