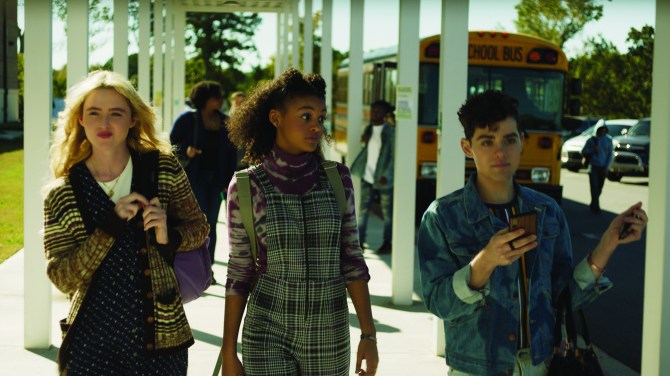 Kathryn Newton’s new movie, Freaky, is Freaky Friday meets Friday the 13th. “Sometimes things exceed your expectations and Freaky really did that for me. It makes you realize you can’t really dream big enough ever,” she tells StyleCaster.

Directed by Christopher Landon (who worked with Newton in 2012’s Paranormal Activity 4), Freaky stars Newton as a Millie Kessler, a high school senior, who switches bodies with the Blissfield Butcher, serial killer played by Vince Vaughn, after stabbed with a magic dagger. The film—which premieres on Friday, November 13—sees Millie (this time in the body of an adult man) hunt down the Butcher (now in the body of a teenage girl) to reverse the switch and prevent the serial killer from murdering more people.


“When I watched Freaky Friday, it stuck with me my whole life. It’s one of my favorite films of all time. When I watched Freaky for the first time, it had that same feeling for me because it was a reflection of the times that we’re in,” Newton tells StyleCaster of how Freaky represents teenagers in 2020. “It’s the world that we’re living in right now. The things that we say, the tropes, we stomp on the clichés.”

Ahead, Newton talked to StyleCaster about what it was like to play both Millie and the Butcher, her relationship with Vince Vaughn on set and the moment she learned that Netflix cancelled The Society season 2.

On playing both Millie and the Butcher

“I had to switch all the time. I’d be Millie in the morning and the Butcher at night or vice versa. For me, I would always look at my feet to remember who I was. I was like, ‘OK! You’re wearing the butcher boots. Just feel them. Feel how powerful you feel in this outfit and just run with it.’ The truth is when you’re covered in blood or you’re carrying a chainsaw, it really puts you there immediately.”

On why Millie was harder to play than the Butcher

“I found it a lot harder to play Millie than the butcher, honestly. It was harder to be myself, because Millie is more like me. You know when you’re in high school and you don’t really fit in, I didn’t fit in in high school. I didn’t have that many friends. I was gone all the time. I was super weird.. I still am. But those things that made me weird and maybe I was bullied for in high school are really what have helped me be who I am now, and I hope that that’s what people take away from this movie. It’s about a girl who doesn’t realize how powerful she is. It doesn’t matter what she looks like. It doesn’t matter what her friends say. She doesn’t believe it. It takes becoming someone else for her to see herself from a different perspective to realize how awesome she is. Those things you were made fun of in high school, that’s what makes you special. You have to hang on to those things.”

Those things you were made fun of in high school, that’s what makes you special.

On her relationship with Vince Vaughn on set

“The first time I met Vince, I was at dance rehearsal and he was at dance rehearsal too and we didn’t know we were going to meet each other that day, and it was just us awkwardly learning a dance routine. The ice was immediately broken. He was so open. We both talked about who Millie was. We created this girl together, and you never get the opportunity to do that on a movie with another actor. I’ll never forget in rehearsal, I was being the Butcher and Vince was being Millie. He was like, ‘OK. I really want to feel like you’re going to kill me right now.’ I was like, ‘Really?’ He’s like, ‘Yeah.’ I’m like, ‘OK…I guess.’ And then we would switch and he would be the Butcher and I would be Millie. It was awesome because when you have people who are all in like that, before you start filming, everyone raises the game.”

On what she learned about gender differences from Freaky

“I think it’s interesting how, when the butcher is a girl, how many more kills he gets. How it’s much easier for him to manipulate people and to kill everybody. It’s hilarious that, as soon as he’s a teenage girl, it’s like a feeding frenzy for this guy. Honestly as an actor, it made me feel really confident, just being the butcher and putting on the clothes. I was carrying a chainsaw and I had blood all over me, to see everybody’s face, I was like, ‘Woah. This is so different from who I am as Kathryn.’ I also realized like, ‘Wow. Kathryn. You can be powerful too. You don’t have to use a chainsaw, but it’s really an energy that you put out there.’” 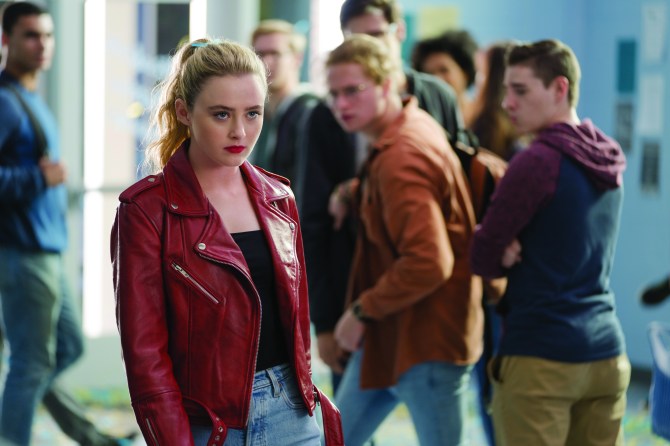 On how she learned The Society was cancelled

“It was totally a gut punch. I felt slapped. I was just shocked. I loved the show. I loved the cast so much. To tell you what I was doing. I was on the phone our showrunner and creator, and I could feel like he was crying. I don’t know if he was crying because I was on the phone, but we were really emotional. Then we had a Zoom with the whole cast and everybody found out together, so nobody was surprised and I just feel like yes, we lost a great show, but we gained a whole new family because they’re my friends. Those actors were some of the best actors I’ve worked with. Everyone was an incredible talent. And then the fandom. That’s a real family and even when it got cancelled, to see the love it got on Twitter, that meant so much to me because I felt like we made something that mattered. At the end of the day, I hope that the story gets finished, just for the fans and to wrap it up. I just want to know who Becca’s baby daddy is. Come on.”

“All the scripts were finished. I was leaving in four days. That’s the problem. I was filming a movie. I had a week off and then go start The Society, and then the pandemic happened. There’s so much happening in the world right now. One thing is really miniscule in the world that we’re in right now. But it is sad because we were so close to doing it. It was so close to happening. It did not seem like it was going to be cancelled at all.”

On how she used to practice her scream by watching Scream

“Growing up, I used to watch the opening scene of Scream with Drew Barrymore just to practice my scream in the car. Because they’re iconic and there’s a reason they’re iconic. I was in Paranormal Activity 4. I would go to those movies all the time. We would go to the midnight showings and scream together and be scared. That’s what I hope people do when they watch Freaky too is that they watch it with their friends and they make fun of each other, and they get scared.”

previousListen To This: Here We Go Again!
nextThe Mandalorian Just Brought Back A Fan Favorite Character