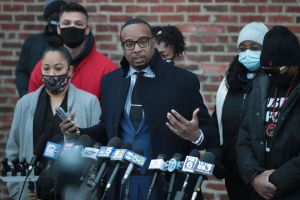 The August 2020 shooting of Jacob Blake at the hands of police in the city of Kenosha, Wisc. left the 29-year-old man unable to walk and sparked a number of nationwide protests. The officer who shot Blake in the back seven times will not face charges, but the family is now in talks to launch a civil lawsuit against the Kenosha Police Department.

Local NPR outlet WUWM reports that after the news went wide that officer Rustin Sheskey would not face charges on Tuesday (Jan. 5), it was then reported that the Blake family and their legal representatives will examine a pathway of launching the lawsuit.

The shooting incident took place when officers, responding to a domestic incident, approached Blake with Sheckey unloading his service weapon in front of the man’s children who were inside the vehicle. Police say they also found a knife inside the vehicle, which may be a hurdle that Blake’s legal team will need to face.

According to Blake family lawyer B’Ivory LaMarr, the matter is far from over.

“We just look at negligence on part of the department. We’re gonna look at the training of these officers. We’re going to look at a lot of different things. We believe the city is definitely responsible for Officer Sheskey’s actions on that day. It left a man paralyzed here,” said LaMarr to a media throng.

Other pathways of retribution and justice could come at the state level as well after Milwaukee U.S. Attorney Matthew Krueger issued a statement that there will an investigation to examine if Blake’s civil rights were violated. The statement included details that the Justice Department will also make a decision on the matter separate from what the state is currently pursuing.