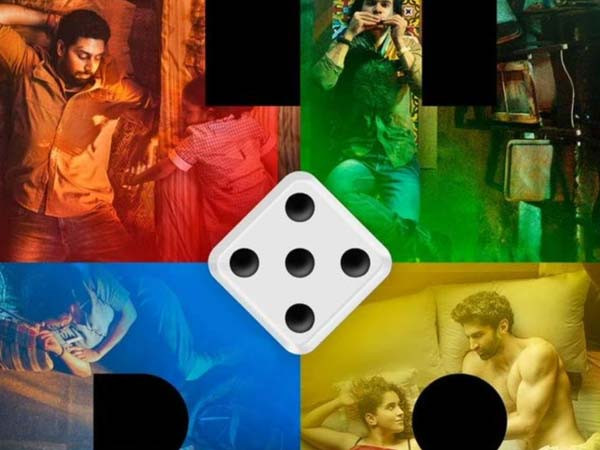 Anurag Basu had utilised the multiple story format last in Life In A… Metro (2007). The film was a multistarrer which touched upon the various aspects of life in a big city. Here, the focus is on a smaller city somewhere in Jharkhand or Bihar. The director uses the motif of the board game Ludo to tell intersecting stories. In Ludo, the moves made by one player affect the others and such is the case in the present film as well. Anurag has not only written the film, he has acted as a cinematographer and has also handled the production design. Thankfully, wearing multiple hats hasn’t come in his way of telling a story.

The first thirty minutes or so are devoted to developing who’s who. Aloo (Rajkummar Rao) was a small-time con man who has given up on his life of crime and runs a small but profitable dhaba because of Pinky (Fatima Sana Shaikh), the love of his life, who incidentally has married another man, wanted him to reform. He still hasn’t gotten over her despite that. Dr Akash Chauhan (Aditya Roy Kapur) is not a medical doctor but someone who has done a PhD from the Arts stream. He’s a voice artist and a ventriloquist by profession. A chance meeting with Ahana Mathur (Sanya Malhotra) leads to both of them being sex buddies. Her only goal in life is to marry a rich guy. Both get into trouble when a sex tape carrying their exploits appears on the internet. Bittu (Abhishek Bachchan), used to be the right-hand man of Sattu Bhaiyya (Pankaj Tripathy), a dreaded gangster. Bittu goes to jail for six years and as a result, his wife leaves him and marries someone else. Bittu misses their young daughter and would do anything to be with her. Rahul Avasthi (Rohit Suresh Saraf) and Shreeja Thomas (Pearle Maaney) are much-harassed employees at a mall and a hospital respectively. Then there is cute as a button Inayat Varma, a young girl who wants her working parents to love her.

Pritam’s music can be strictly called functional here as it’s used as a vehicle to push the narrative forward and doesn’t stand out on its own. Basu has also cleverly used the famous Bhagwan dada song O beta ji, kismat ki hawa kabhi naram, kabhi garam from Albela (1951) to set the tone of the film.

What Basu has done is to provide us with a bunch of characters with interesting quirks. Rajkummar Rao’s character is modelled on Mithun Chakraborty because the woman he loves idolises Mithun. He uses Mithun’s mannerisms effectively to bring out both happiness and sadness. It’s Rao’s genius that he uses the trademark Mithun moves to maximum effect. And most of it is shot from the back, mind you, and yet you get the message across. Aditya Roy Kapur’s character is shown to be the most sorted out of this madcap lot. But even he’s shown to make mimic animals while having sex as he’s a voice artist. Abhishek Bachchan is given the least dialogue of all. He expresses his angst through his eyes, his face and through his silences. His bond with Inayat reminds one of Balraj Sahni’s bond with the little girl in Kabuliwala (1961). His is perhaps the most poignant story of all. Pankaj Tripathy has become kind of repetitive but still manages to leave an impact as a gangster with a sense of humour. He’s such a screen-stealer that Basu throws in his scenes whenever the pace is found lagging. Sanya Malhotra and Aditya Roy Kapur’s quest to find the hotel where they were filmed having sex provides a road movie angle to the film. They move from location to location, have a merry set of misadventures everywhere. Theirs is the most hilarious track of all. They complement each other to a T and look good as a couple. One can sympathise with their contrasting viewpoints towards life and yet root for them as a couple. Fatima Sana Shaikh is the devoted housewife who turns to an old flame to solve her problems. She knows she’s using him and does it without feeling remorse. Rohit Suresh Saraf and Pearle Maaney’s characters have been written in to provide pure comic relief and do their job.

All-in-all, Anurag Basu has once more given us true-to-life characters caught in circumstances not of their own making and trying to do their best under the circumstances. There are no heroes or villains in the film. Just people making do with what life has thrown at them. The situations sometimes may feel implausible but you understand that’s the director exercising poetic licence. Ludo is a dark comedy at one level and a moralistic tale describing the effects of karma on the other. Watch it for some inspired acting by the ensemble cast and some genuine laugh-out-loud moments…

previousDemon’s Souls PS5 | Best Weapons for the early, mid, and late game
nextAukey Basix Slim 10,000mAh review: A battery pack that offers more than what you pay for