Miles Morales Swings Players into the Future of Gaming 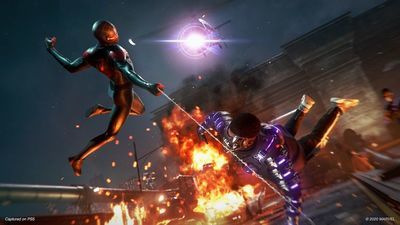 A joyous gaming experience, “Marvel’s Spider-Man: Miles Morales” endeavors to do three things at the same time. Of course, it’s a direct sequel to 2018’s hit for Sony, “Marvel’s Spider-Man,” which finally gave the webslinger the game he deserved and was a massive critical and commercial hit for the company. It was an action-packed adventure game, taking place in a robustly imagined New York City and anchored by some of the most addictive melee gameplay in years. But this game also builds on the legacy of Sony’s Oscar-winning “Spider-Man: Into the Spider-verse,” the smash hit film that made Miles Morales into a household name for homes that didn’t know the character from his comic books. Finally, “Miles Morales” is the tentpole blockbuster for the next generation console from Sony, the PlayStation 5, releasing on the same day as the new system (which we will cover in more detail here in the coming weeks). With its vibrant setting and fluid action, it has been designed to be the “display model” for the next-gen console, the one that every store that’s open during a pandemic should use to try to sell the PS5. On that note, it’s the most visually impressive game ever produced, captivating in its art direction, graphics, and pure momentum.

“Spider-Man: Miles Morales” picks up after the close of the 2018 game (and not only offers a nifty recap for gamers who didn’t play that but a version of this title also includes a remastered-for-PS5 edition of the first game in its entirety in one of its editions). Peter Parker has become a hero for the entire city, but Miles Morales remains in the shadows, a bit more uncertain about his role as a hero than his spider-counterpart. That all changes when Parker leaves the city at a time of crisis, forcing Miles into true heroic action to save New York from literal destruction. He basically steps into the tights completely in this game, which is a combination of an origin story for Miles Morales while also mimicking the gameplay of the first title.

That gameplay feels more fluid and impressive than ever. Just swinging through the city in “Miles Morales” is a visual marvel but it’s the detail in the world around Miles that’s truly stunning. The game takes place near Christmas, and the streets and parks are dotted with a thin layer of snow; the windows of the skyscrapers reflect the world around them in a way I’ve never seen before; the sunlight cuts through the buildings in a way that wasn’t feasible on the PS4; the melee combat flows in a way that’s never been achieved until now. And the game really pops to life when it embraces the style of things like the “Spider-verse” film. Your character can even be customized with an “animated” suit that makes him look exactly like a Hollywood cartoon character. It’s a captivating game to simply absorb on a technical level.

What about story? At this site, we’ve focused mostly on games that share structure with film or television, such as the influences on “Ghost of Tsushima” or the intense storytelling of “The Last of Us, Part II” (both of which are also being upgraded/enhanced for play on the PS5, by the way). In that department, Miles Morales is a little slight. Once again, Spider-Man has to fight crowds of bad guys that have sprouted up across the city. The side missions generally involve simple removal of a group of enemies from a location. Some escaped prisoners are breaking into a store? Go beat them up with your webs, Spidey! The side missions that focus on this kind of “clean up the city” narrative do tie into the overall character-building that casts Miles as a hero of the people but they feel a little familiar for a game that one wishes would lead the way to the future more than replicating the past.

The same holds true for some of the story, which won’t be spoiled here but involves a new villain with a connection to Miles, a role for the character Prowler that fans of the book and movie will remember, and a growing rebellion by baddies with some wicked technology. One thing that “Miles Morales” does emphasize more than the previous game is tech and gadgetry. In combat, Miles can use devices like holo-drones to fight alongside him, remote mines, and even a gravity well that can suck in enemies. He gains intense powers called Venom that can be used to electrically stun and defeat bad guys. And these tie into the tech-heavy aspect of the narrative, but it’s a game that’s undeniably thin in terms of both story and major set pieces. It’s arguable that the best action scene in “Miles Morales” comes early with a fantastic sequence involving a runaway Rhino, who Miles literally has to ride through settings in the city, including a detailed mall set up for Christmas. As much as I enjoyed playing all of “Miles Morales,” it never quite tops that spectacle again, content to settle into some pretty familiar beats in terms of storytelling and structure.

It’s also a relatively short game, running about eight hours in total, with a few more for those who like to explore and stop every crime in the city, or collect every item in it. “Spider-Man” released some solid DLC and one hopes that the same happens for “Miles Morales,” a game that sometimes verges on feeling more like an expansion than a legitimate sequel.

Ultimately, the story of “Miles Morales” feels secondary to the experience of “Miles Morales,” and that’s going to be the dividing line on which players of this game decide how they feel about it. It’s a game to get lost in, swoop through the city, do tricks, stop crimes, customize your character, and just marvel at the incredibly smooth experience of gaming on the PS5 (for the record, the load times are insanely non-existent). When you dig into the story or lack thereof, it comes up short, and some buyers will groan about the short playtime (although I would always argue that I’d take a brilliant 8-hour game over a padded and repetitive 30-hour one every time). But while it’s thin narratively, it’s so rich with pure fun that storytelling weakness can be forgiven. Something to keep in mind is that really feels like a mere preview for what’s to come in this generation of gaming. And how great is it that it’s Miles Morales who is leading the way to the future?

Sony provided a review copy of this game, which will be released on November 12th on PS4 & PS5