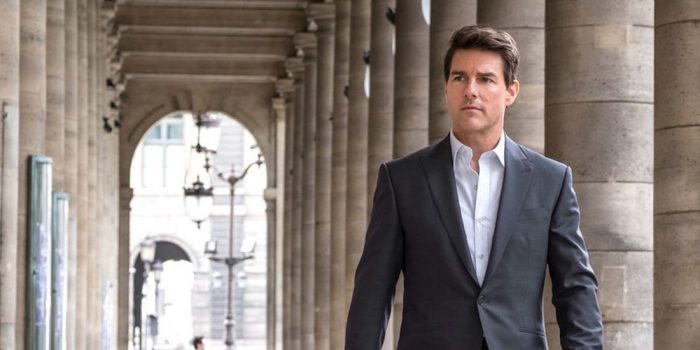 Tom Cruise has hung out of ascending airplanes, jumped out of helicopters, scaled the world’s tallest building in the Mission: Impossible series, aka the lone franchise that will let him spit in death’s face and laugh. So what could he possibly do next? Well, Mission: Impossible 7 already teased a motorcycle stunt for the gods, but Christopher McQuarrie and Cruise are going back to an old cinematic tradition for the next death-defying Mission: Impossible 7 stunt: a fight on top of a speeding train. And yes, both star and director are really on top of that train.

Norway’s scale and beauty have left an indelible and defining imprint on our film and reminded us that anything is possible. On behalf of everyone working on Mission: Impossible, our sincerest thanks to The Norwegian Film Incentive, The Norwegian Railway Museum, the infinitely patient Stranda and Rauma Municipalities, our endlessly enduring Norwegian crew, along with everyone who supported our filming here. And, of course… The Mountain. Most of all, we give thanks to the warm and welcoming people of Norway. Your kindness and consideration are nothing less than an inspiration. We’ll miss you dearly and look forward to seeing you again. Tusen hjertelig takk. Buckle up, Roma. Here we come… #MI7MI8

A post shared by Christopher McQuarrie (@christophermcquarrie) on Oct 4, 2020 at 3:15am PDT

In an Instagram post, McQuarrie teased the next crazy Mission: Impossible 7 stunt which Cruise will pull off: a classic fight on top of a speeding train. But the star and director are going old school, actually performing the stunts on top a train that is going pretty fast, according to footage shot by excited passerby. McQuarrie’s image on Instagram teased the fight sequence in the film, which will also apparently feature a flaming helicopter in the background. It won’t be the first time Cruise has had a fight scene aboard a high-speed train — the first Mission: Impossible feature a sequence on top of a bullet train moving at 200 mph, which was more CG-reliant than this sequence probably will be.

In his post, he thanked “The Norwegian Film Incentive, The Norwegian Railway Museum, the infinitely patient Stranda and Rauma Municipalities, our endlessly enduring Norwegian crew, along with everyone who supported our filming here,” as well as the people of Norway. McQuarrie confirmed that the shoot in Norway was complete and that the production will head to Rome next.

Mission: Impossible 7 brings back not just Cruise but also previous Mission players Ving Rhames, Henry Czerny, Simon Pegg, Rebecca Ferguson, and Vanessa Kirby. New additions include Hayley Atwell, Pom Klementieff, Shea Whigham, and Esai Morales. We don’t really know what the plot of the film is just yet, but it’s safe to assume it will involve Ethan Hunt and his team on yet another hair-raising mission. Who knows, the team might even be disavowed yet again – something that seems to happen often in this franchise.

Christopher McQuarrie, who directed the previous two films in the series, is back to direct, and will actually shoot Mission: Impossible 8 back-to-back with 7. Filming on M:I 7 was supposed to start in late February of this year, but the coronavirus complicated things. After some delays, McQuarrie and company are back to work in Norway. As of now, Mission: Impossible 7 is set to hit theaters November 19, 2021.

READ  The Eric Andre Show: Why This Ritzy Season Is “The Best Yet”

The late, legendary blues guitarist B.B. King was so influential, it’s going to take two biopics to tell the story. King’s estate is preparing a project separate from The Thrill Is On, which is set to star Wendell Pierce (The Wire, Selma), according to Variety. “We want to be crystal clear that the film announced […]

The post B.B. King Estate Prepping Biopic Separate from Thrill Is On appeared first on Den of Geek.

October 26, 2020
The LEGO Star Wars Holiday Special is an upcoming Disney+ film set after the events of The Rise of Skywalker, featuring the return of Sequel Trilogy heroes like Rey, Finn, Poe, and Rose in a brand new adventure.
October 26, 2020

The accomplished screenwriter and Black-ish showrunner is stepping behind the camera.

The post Kenya Barris will make his directorial debut with a Richard Pryor biopic appeared first on Little White Lies.

Oscar Isaac, one of the very best actors of his generation, is about to step into the Marvel Cinematic Universe. He’s currently in talks to star in Moon Knight, a forthcoming Disney+ series about a psychologically unstable mercenary who may or may not communicate with a lunar god who bestows the powers of super strength. […]