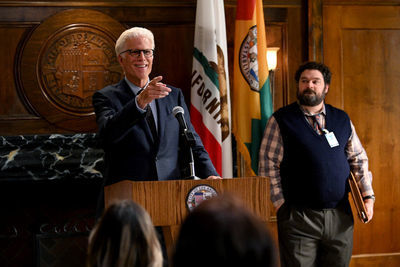 “Mr. Mayor” has a Ted Danson problem. Just now, you perhaps shouted “THERE IS NO SUCH THING AS A TED DANSON PROBLEM” at your screen. You are not wrong to shout, reader. To imply that Ted Danson is the source of any sitcom’s problems should be enough to have me immediately struck from the membership rolls of the swank TV critic clubhouse, inside which we all gather to watch old episodes of “Frasier” and quote “Mad Men” at each other while rolling around in the cash Disney throws at us in exchange for lukewarm reviews of Marvel movies. Let me begin again, before things get intense.

The problem with NBC’s “Mr. Mayor,” the new sitcom from Tina Fey and Robert Carlock, is not Ted Danson himself. It’s the nearly overpowering temptation to imagine that the new mayor of Los Angeles is secretly Sam Malone, or Michael the Architect, or the fictional Ted Danson from “Curb Your Enthusiasm,” or whoever the hell he played on all those seasons of “C.S.I.” As it stands now, neither Danson’s impeccable timing nor his internal vat of charisma can compensate for the teeth-grinding sameness of “Mr. Mayor,” nor its bland central figure. Swap in any of those other guys, however, and as “Arrested Development’s” fictional Carl Weathers might opine, “You’ve got a stew going.”

All that is to say that, in the two episodes provided for critics at least, there’s a decided lack of meat to “Mr. Mayor,” a sitcom with staggering levels of unfulfilled potential. Its shortcomings are most apparent on a character level, a circumstance that renders its top-tier cast as much a blessing as a liability and which underlines the formulaic nature of the premise. There’s nothing wrong with a formula. That’s especially true in the land of sitcoms. Formulas become familiar because they work, and that familiarity becomes fertile ground for experimentation, innovation, and meta-humor. “Mr. Mayor” will likely bring other sitcoms to mind as you watch, and that’s a feature, not a bug; I imagine the phrase “30 Rock meets Parks & Rec” got tossed around a lot while the series was in development. The issue is not the formulaic nature of the series, but that it feels like a formula and little else, and the presence of actors like Danson and Holly Hunter only makes its hollowness all the more apparent. It’s an experience that leads to musings like this: I bet “Mr. Mayor” would be great, if it were actually “The Good Place.”

That said, two episodes — and these two episodes will air back-to-back, making them essentially one long pilot — aren’t much to go on, so it’s possible, even probable, that the show will live up to its crackerjack premise. Billboard mogul Neil Bremer (Danson), a retired billionaire, decides to run for Mayor of Los Angeles after the madness of 2020 drives the previous mayor to melt down, quit, jump in the nearest taxi, and ask the cabbie to drive straight into the ocean. His daughter Orly (Kyla Kenedy of “Speechless”) has also entered the political fray, running for sophomore class president, and while her father’s position complicates things, her frustration is nothing compared to that of Arpi Meskimen (Hunter), a longtime progressive City Council member whose fury at the success of an inexperienced billionaire drives her to immediately appoint herself as a full-time thorn in his side. That also makes her a problem for Bremer’s staff: Chief of Staff Mikaela Shaw (Vella Lovell of “Crazy Ex-Girlfriend”), a social media wunderkind who can’t quite believe she got this rich buffoon elected; bemused strategist Tommy Tomás (Mike Cabellon); and Jayden Kwapis, a holdover from the last administration and a Kenneth the Page/Jerry Gergich hybrid played with a marvelously casual air by Bobby Moynihan. Hijinks ensue.

One hopes that hijinks won’t be the only things that ensue, however. While there are glimmers of something more substantial and engaging beneath the surface—more on those below—the series does little to distinguish itself in these first two episodes. How hard do you have to work to make almost no impression with a cast led by Ted Danson and Holly Hunter? Yet in Danson’s case in particular, there’s a sense that he’s biding waiting for the real show to start, playing a sort of general amiability in the interim. (That said, he can still toss off a punchline like no one in the business; Neil denies swimming in a pool filled with champagne because it “would ruin the grout,” and it’s right up there with “what am I, a farmer?” In the pantheon of rich guy jokes.) Hunter doesn’t fare much better, but she, at least, benefits from playing with an antagonist’s momentum; she also gets the sole satisfying storyline, when Arpi and Mikaela go on a City Hall-wide quest for double-sided tape. It’s not the destination, it’s the journey. The real double-sided tape is the connections they forge along the way, and Lovell and Hunter are expertly matched.

It would be foolish to write off any sitcom with such a pedigree. Frankly, the presence of series regulars like Danson and Hunter is enough to buy this one a long runway, and Fey and Carlock are no slouches themselves. But blue blood alone isn’t enough to make any series a must-watch, just like being rich and/or famous doesn’t automatically make you a great public servant. There’s got to be a there there, a core that’s bright, warm, clever, or even comfortable. Right now, “Mr. Mayor” is just a stuffed shirt. But hey, what if he was a bartender instead?