Nomadland, I May Destroy You Take Top Honors at 2021 Film Independent Spirit Awards 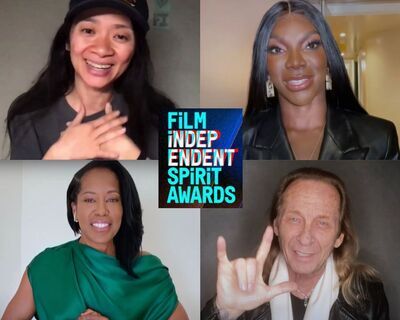 The Film Independent Spirit Awards are usually held in a tent on the beach in Santa Monica, but for the first time in its existence, it was viewed virtually in a Zoom-like setting with break-out rooms imitating private tents for attendees to mingle before and after the show. Chloé Zhao‘s “Nomadland” affirmed its frontrunner status moving into this Sunday’s Oscar telecast when it received top honors during last night’s presentation. Zhao’s acclaimed drama earned the most accolades of the night, winning Best Feature, Best Director, Best Cinematography and Best Editing.

Mulligan’s win suggests she may be the frontrunner for the Best Actress Oscar, which up till now has been the hardest race to predict, with Andra Day winning the Golden Globe for “The United States vs. Billie Holiday“; Viola Davis winning the SAG Award for “Ma Rainey’s Black Bottom“; and Frances McDormand winning the BAFTA for “Nomadland” in the same category. Also cementing her frontrunner status is Yuh-Jung Youn, who received the Best Supporting Actress Spirit Award for her scene-stealing role in Lee Isaac Chung’s “Minari.”

Chung was the only man nominated in the Best Director category, where he, Zhao and Fennell were joined by fellow nominees Eliza Hittman (“Never Rarely Sometimes Always”) and Kelly Reichardt (“First Cow“). Another acclaimed female filmmaker, Regina King, received the Robert Altman Award for her directorial debut, “One Night in Miami…” along with her casting director Kimberly Hardin and cast members Kingsley Ben-Adir, Leslie Odom Jr., Aldis Hodge and Eli Goree.

“Saturday Night Live” cast member Melissa Villaseñor hosted the ceremony and delivered spot-on impressions of such fellow comedians as Kate McKinnon, Kristen Wiig, Sarah Silverman and Owen Wilson. In fact, her performance was so good throughout the virtual show that it served as a showcase for her talent, and prompted hope among viewers of her role on SNL being expanded.