On Our Radar: Shahadi Wright Joseph Can Do So Much More Than Just Horror 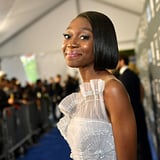 At just 15 years old, Shahadi Wright Joseph has already accomplished things many actors can only dream of: a Broadway debut, a starring role in Jordan Peele’s Us, and playing the younger counterpart of Beyoncé in 2018’s The Lion King. Joseph first discovered her love of acting at 8 years old after booking the role of Nala in The Lion King on Broadway. “After I had finished doing that role, I really knew that this was something that I wanted to do for the rest of my life,” she told POPSUGAR. From The Lion King, she went on to join Andrew Lloyd Webber’s School of Rock before finally making the jump from the stage to the screen. While other actors have had difficulty making the transition, for Joseph, film has actually been easier. “When you’re on Broadway, you always have to get everything right. There’s no going back and reshooting, like you do on film, so you kind of become this perfectionist when it comes to the way that you’re acting and singing and dancing,” she shared. Joseph credits this “perfectionist” mentality for making it easier to get things right on the first try.

However, Joseph also knows what it’s like to be in an industry that isn’t always accommodating. “I have first-hand experience when it comes to inequality in the industry and not having the ‘marketable look.’ It can be really disheartening at times,” she added. But just because it can be hard at times, doesn’t mean Joseph is going to give up. “You have to keep pushing and going because you’ll never know until you try,” she told me. “There’s going to be a lot more noes than there are going to be yeses, but you really need to work as hard as you can because the yes is most definitely coming.” After all, where would her idols Viola Davis, Octavia Spencer, and Regina King be if they had simply stopped after being told “no?”

When it comes to being a role model herself, Joseph tries to “support all of my friends and all of the people in the industry who are my age specifically.” “Especially in Black Hollywood, we need to have a circle of support when it comes to our work and our passion,” she added. “It really does help us in the long run.” And Joseph’s not alone in her thinking, as Them‘s executive producer Lena Waithe shared a similar sentiment about encouraging “folks to be creative.” Joseph really hopes that she “can inspire young Black girls to start working on their own and start acting and doing what they love.” “It’s just an honor and a blessing to be able to open doors for others,” she explained. “I hope that people can really look at my work and say, ‘Oh my God, I want to do that one today,’ and take inspiration from me.”

“Especially in Black Hollywood, we need to have a circle of support when it comes to our work and our passion.”

As for what she’s passionate about, Joseph is currently really involved in women’s rights. “Since we’re in this incredible and interesting new time with a new president, I feel women’s rights are especially very important when it comes to the Black community and it relates a lot to Them as well, at least when it comes to intersectionality,” she said. Them follows a Black family as they move into a predominantly white neighborhood during the Great Migration of the 1950s. On the show, Joseph portrays teenager Ruby Lee Emory who not only has to deal with where she fits in at her predominantly white high school, but with the insecurities that rear their ugly head as a result.

When the first trailer for Them was released in March, it was hard not to make comparisons between it and Us, one reason being because Joseph stars in both. The actress understands the comparisons, but wants people to know they are very different projects. “I’m most excited to see specifically how Black people will relate to the Emory family struggles,” she stated, primarily because she feels the show isn’t just for entertainment. “I think the show is most definitely a form of education as well and what the family experiences is really meant to scare people because it’s real. Those real experiences can really traumatize a person. When people see it, they’re going to be a little bit shocked . . . Us was about class, immigration, and American privilege. Them is most definitely focused on the horrors of racism, especially in the Jim Crow era.”

Given that Them is focused on the Jim Crow era and draws from historical events like the Great Migration and the real estate scam, Joseph also pulled inspiration for her character from history. “Ruby Bridges was probably my biggest inspiration, especially when it came to Ruby Lee going to school and kind of figuring out her way of life,” she explained. “I would always research her and see all of those pictures of her going in and out of school with white people heckling her all the time.” For Joseph, having to film similar school scenes herself ended up being the most difficult part of working on Them. “It was just so heartbreaking to watch [Ruby] having to go through all of these traumatic experiences and feel so helpless because I couldn’t do anything about it,” she revealed. “I really relate because we’re both in high school for the first time and that need and that want to feel accepted and to fit in is just so real.”

Although Joseph related to Ruby on a personal level, it was hard not to let the character overwhelm her once she was in costume. “As soon as you get into hair, makeup, and the outfit and you see the set, it kind of just overwhelms you. You feel as if you’re time traveling,” she said. As a way to combat the heavy source material and not let the character of Ruby consume her, she would write out her feelings in a journal among other things. “I feel like it is so important to decompress after shooting these really deep traumatic scenes. Usually, I would go home and watch some of my favorite movies, do self-care, skincare, take showers, or meditate,” she disclosed. “Journaling is really important as well. I feel like that was probably the most important part for me because it almost felt bittersweet to let go of Ruby because I feel like she’s become kind of a part of me. So that part could be difficult, but you really just try your hardest to separate yourself from the character.”

Not only does Joseph want to separate herself from the characters she plays, but she also wants the audience to remember she’s more than just a genre. Even though she has “found such a love and such a passion for the [horror] genre” through her roles as Zora Wilson/Umbrae in Us and Ruby Lee Emory on Them, Joseph is ready to branch out. “I don’t want to get pigeonholed into the genre because I can do more than that,” she noted. “I would love to do a drama project, coming-of-age stories, really just something with a different type of audience because horror is very, very specific.” And if you’re wondering where you can see her next, Joseph has a few exciting upcoming projects that she can’t talk about just yet. However, she did tell me she will most “most definitely” keep us updated. For now, you can see her on Amazon Prime Video’s Them: Covenant.

previousTristan Thompson Recovering From Nasty Case Of COVID, Says He Had ‘ALL The Symptoms’
nextCharlyne Yi Opens Up About Working On The Disaster Artist, Calls James Franco A ‘Sexual Predator’ & Seth Rogen An ‘Enabler’
This website uses cookies to improve your experience. We'll assume you're ok with this, but you can opt-out if you wish. Cookie settingsACCEPT
Privacy & Cookies Policy