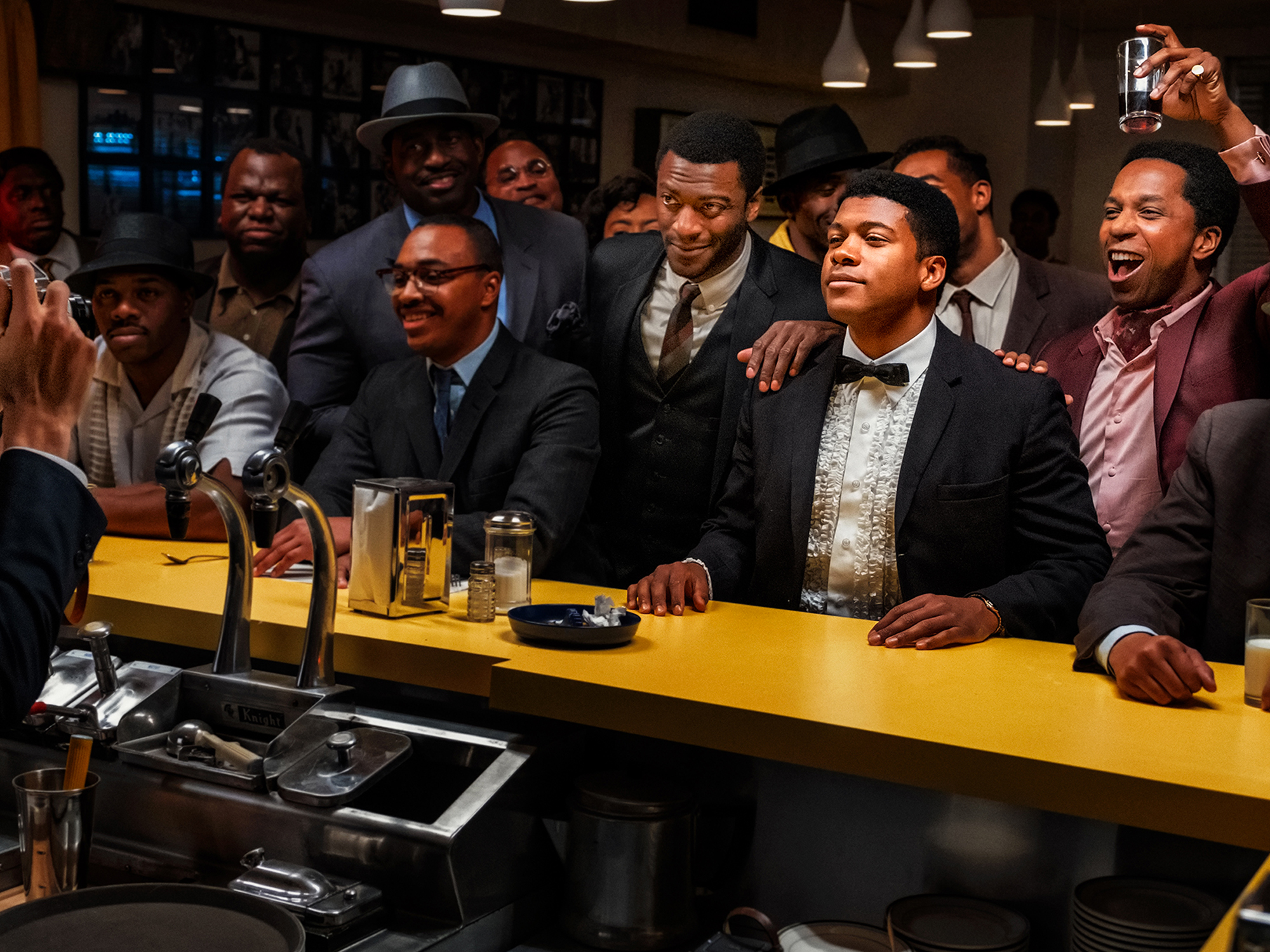 Imagine if four of your childhood heroes spent an evening together. What would happen? What would they talk about? After stumbling across an extraordinary real-life example of this situation in a history book, these questions consumed writer Kemp Powers; One Night in Miami is his answer.

Though the film provides only a snapshot of these men’s lives, we catch them at a pivotal moment. We see X preparing to leave the Nation of Islam, whilst Clay (soon to be known as Muhammad Ali) is on the precipice of publicly joining the movement. Cooke reflects upon his role and responsibilities as a Black artist, and Brown considers the possibility of a career in film and the freedom that it could bring him.

King’s 35 years of acting experience help her draw out impressively nuanced performances from the cast. The pitfalls of playing such well-known personalities are artfully avoided, and whilst these men are instantly recognisable, they manage not to stray into the territory of impressions or caricatures. In particular, Odom Jr perfectly captures Cooke’s easy charm, and during a flashback we see him sing a scaled-back version of Chain Gang in a rendition fitting of the man known as the ‘King of Soul’.

But these strong performances alone are not enough to sustain the audience – the film lacks clear narrative structure and buckles under the weight of its powerful protagonists. Important discussions that occur throughout the film get lost, with their impact minimised due to the film’s lethargic pace.

Over 15 minutes is spent giving clunky introductions to these prominent men, and One Night in Miami takes a while to get into the thick of it, never quite finding a solid rhythm. As is often the problem with films adapted from theatre productions, it still has a stagey feel, and the confinement of most of the action to a dingy hotel room does nothing to help maintain the audience’s interest.

This is a huge shame when so many of the issues it raises are just as relevant now as they were in 1964. When it’s suggested that, as a light-skinned man, X’s militancy could in part be an attempt to prove himself to other Black people, he shuts down this idea – “we are all Black people” – using an argument perpetuated to this day to derail conversations about colourism. Meanwhile, Brown’s criticism of white liberals who “just cannot wait to pat themselves on the back for not being cruel to us” feels as pertinent as ever in today’s world of black square activism and self-proclaimed allyship.

One Night in Miami is undoubtedly timely and the men whose lives it depicts are clearly compelling. But this is not enough to carry the film, and it ultimately fails to pack a punch.

The Black Panther and Fantastic Four star is now moving over to DC!

There are plenty of movies that aren’t getting released in theaters this year that audiences are hungry to sink their teeth into. Many of them have been moved to 2021, but this weekend brings the release of a movie that deserves the big screen treatment that has unfortunately been relegated to a small screen debut […]

October 16, 2020
Tobey Maguire and Andrew Garfield join the MCU in this rather incredible fan-made trailer for a live-action Spider-Verse movie.
October 16, 2020

Adam Sandler is a beloved figure, even when he pumps out kind-of-awful movies. But he balances those types of films out with the occasional turn in a genuinely good movie – like the recent Uncut Gems, or in Paul Thomas Anderson‘s fantastic Punch-Drunk Love. Anderson’s film is the gold standard for “good Adam Sandler performances,” but according […]

The post Adam Sandler Was Worried He Would “Ruin” ‘Punch-Drunk Love’ appeared first on /Film.

It’s a strangely feel-good finale. After spending more than two hours witnessing a gross miscarriage of justice that seemed to suggest the deck is stacked against those the establishment deems “radical” or “extreme,” Aaron Sorkin’s The Trial of the Chicago 7 ends with the smallest of victories being given Hollywood heft. Tom Hayden (Eddie Redmayne) […]

The post The Trial of the Chicago 7 Ending: What Happened Next? appeared first on Den of Geek.