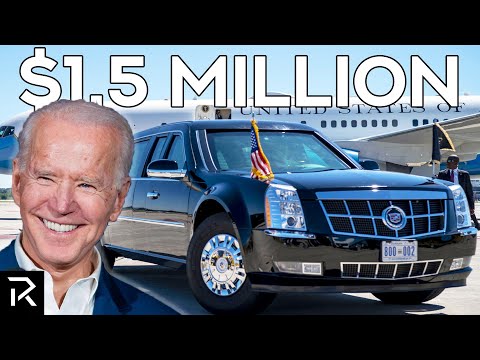 Welcome back, Richest fans! Now that he’s President of the United States, Joe Biden has at his command the complete array of transportation for the Commander-In-Chief. One of which is the luxury limousine nicknamed, The Beast. Today, we’re going to look at all the facts and features of this armoured vehicle that’s worth millions! On top of that, we’re going to examine some of the state cars used by world leaders all over the globe. All to see how The Beast stacks up against them.
Now for the spoiler paragraph. If you like surprises, we suggest you stop reading and watch the video multiple times. Firstly, as we mentioned, we have Joe Biden’s custom-made Cadillac limo that joined the fleet in 2018 under former President, Donald Trump. Next is the Prime Minister of the UK, Boris Johnson. He uses a more manoeuvrable vehicle in the shape of a Jaguar XJ Sentinel. We then have Russia’s President, Vladimir Putin, who showcases a mammoth motor of his own, the Aurus Senat. Also in the UK, we’ll examine the Bentley-made million-dollar limousines that were gifted to Queen Elizabeth II. Sticking with the Royals, we’ll then see the Sultan of Brunei, Hassanal Bolkiah, who had one of his Rolls Royces covered in gold for weddings. Then there’s the leader of North Korea, Kim Jong-un. He somehow managed to get around sanctions to transport a Mercedes Maybach S600 Pullman Guard into the country! Finally, we’ll briefly examine one of the most expensive civilian armoured limos, the Mercedes G63.

ALSO READ  Does My Neighborhood Determine My Future?

For copyright matters please contact us at: [email protected]

previousWhy This Woman Tries to Hide Behind Her Hair
nextEmmy-Winning Set Designer Found Dead ‘Under A Pile Of Debris’ Inside Her Home After Going Missing Six Months Ago
This website uses cookies to improve your experience. We'll assume you're ok with this, but you can opt-out if you wish. Cookie settingsACCEPT
Privacy & Cookies Policy