‘Raya and the Last Dragon’ Featurette: How the Cast and Crew Made The Disney Animated Film in Lockdown 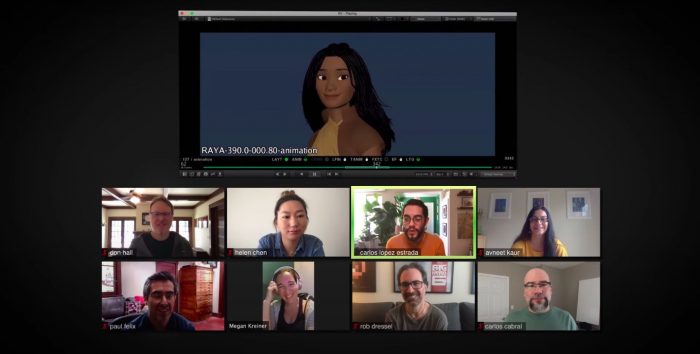 Any animated feature film is a massive production, usually involving hundreds of animators, story-boarders, production designers, and dozens of other positions. Under a major animation studio like Disney, Raya and the Last Dragon had a crew of roughly 400-plus people, all of whom were suddenly thrown for a loop when the coronavirus (COVID-19) pandemic hit. Suddenly, those hundreds of animators – as well as the directors, writers, and cast members – had to make a Disney movie from home. And they pulled through. See how they did it in the newly released Raya and the Last Dragon featurette.

Raya and the Last Dragon Featurette

Disney dropped a new Raya and the Last Dragon featurette which showed how the cast and crew of the upcoming Disney animated film came together to make the movie from home.

“We were animating, lighting, having story meetings. All of that was done from everyone’s home with dogs, and cats, and babies,” producer Osnat Shurer said in the featurette, which then showed various cats and babies lounging in front of screens while the hardworking Disney employees attempted to build a million-dollar animated movie.

“It could only have happened because everybody is passionate about the films we make and they brought that. I mean the movie is, I think, one of our most beautiful films,” added Don Hall, who directs the film with Carlos López Estrada, with Paul Briggs and John Ripa co-directing.

Here is the film’s official synopsis:

Raya and the Last Dragon takes us on an exciting, epic journey to the fantasy world of Kumandra, where humans and dragons lived together long ago in harmony. But when an evil force threatened the land, the dragons sacrificed themselves to save humanity. Now, 500 years later, that same evil has returned and it’s up to a lone warrior, Raya, to track down the legendary last dragon to restore the fractured land and its divided people. However, along her journey, she’ll learn that it’ll take more than a dragon to save the world—it’s going to take trust and teamwork as well.

Raya and the Last Dragon arrives in some theaters and will be available for Premier Access through Disney+ on March 5, 2021.

The post ‘Raya and the Last Dragon’ Featurette: How the Cast and Crew Made The Disney Animated Film in Lockdown appeared first on /Film.