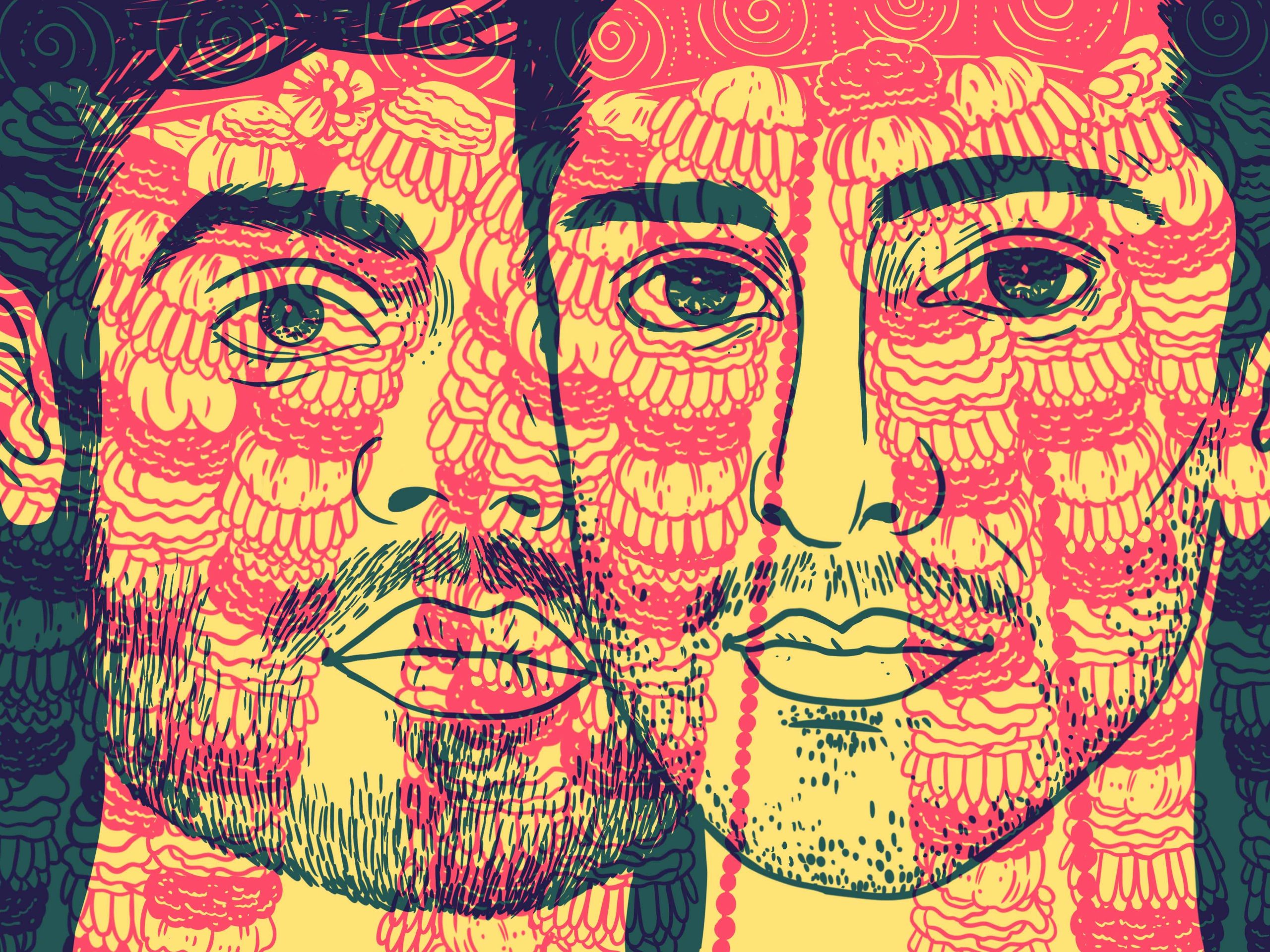 Mogul Mowgli is the debut narrative feature from documentary maker Bassam Tariq. It was co-written with Riz Ahmed who also stars as Zed, a rapper on the cusp of stardom who, on a rare trip to see his family back in North London, is struck down by a debilitating illness. We spoke to them about bending genres, satirising yourself and the shared experience of a diaspora.

LWLies: What was it that you saw in each other’s work that made you want to work together?

Riz Ahmed: We met socially through mutual friends in New York. I hadn’t seen any of Bassam’s work when we met but later I saw These Birds Walk and it was unlike any documentary I’d ever seen. I wanted to work with him because he bends genre; he can’t help but subvert expectations. Mogul Mowgli is a family drama but also a comedy, a horror, a musical and a spiritual film. I think he just has a language for mongrel-hood and merges genre in a way that uniquely accommodates our experience.

Bassam Tariq: When we met I’d seen Four Lions like seven times. I’d never seen anything like that in my life and what Riz brings to it is so incredible. There is this one moment in the film after Adeel [Akhtar]’s character dies and you see your brother and you want to talk to him but you don’t know if you should. That encapsulates so perfectly what it’s like to be a Western Muslim.

You both have Pakistani heritage but Riz, you’re from London, and Bassam, you’re from New York. Was there still a big overlap in your life experiences?

RA: There are differences in the communities here and there, but essentially the emotional ground and experiences that this film covers in based on our shared experiences as diaspora artists who are trying to find a way forward by looking back. Looking back means confronting things we were trying to escape on some level and yet the source code, the map for navigating our way forward, is often in the past. This film is a bittersweet love letter to the home we are trying to run away from that is our destiny.

The film reminded me of the Quranic story of Ayoob [Job in the Old Testament]. Was that part of the inspiration for it?

BT: We wanted to look at our own Islamic folk stories: in the Hamzanama the stories of the Prophet’s uncle where he goes on mystical journeys; 1001 Arabian nights; Ayoob. It’s all part of our tradition and we wanted to pull from all of it. In Sufism we also have ideas of illness as a means of purification and through illness you have veils lifted from your heart. So we thought what if we use this idea that hallucinations are also veils being lifted. They may look like panic attacks or fevers dreams but they could also be him learning about himself.

Some moments seem very self-critical: going by a nickname that’s more acceptable in the West; not spending any time where you are from but being obsessed by your heritage. How was it creating something that’s also digging at your personally?

RA: Part of what the film is doing is taking the piss out of me. Your true self isn’t that persona, so part of what the film is doing is ripping the piss out of the persona. But part of the journey that Zed is going through is recognising that part of himself is illusory. I enjoyed that self-lacerating portrayal. It’s like when you watch Woody Allen playing a neurotic artist, or in Atlanta or Curb Your Enthusiasm – there’s a great tradition of performers satirising themselves because at the heart of that experience there is some insight they want to share.

You weren’t tempted to go the Matt Damon route of writing yourself as a super cool genius who’s great with the ladies?

RA: Ha! Maybe it’s a factor of our subversive self-awareness that we created this version of the character. Or maybe it’s our limiting self-belief that we can’t see ourselves as genius superheroes who are great with the ladies. But for whatever reason that template, that idea of self, isn’t available to us in the diaspora. We are not yet super heroes. There isn’t that herculean template for us but there is – perhaps as there was with the Jewish or Italian diaspora – something messier, grittier, more complicated and surprising.

This isn’t a white gaze film: there’s no explanation about why women get their periods more during Ramadan or why passing a joint with your right hand would be a problem. Did you worry that you might alienate a white audience?

BT: It’s something keeping me up at night more now that reviewers are going to see the film; critics are the cultural gatekeepers and everyone is checking Rotten Tomatoes scores. We don’t have enough critics and cultural writers to not just to identify this a cultural clash story but look at it a little deeper the way the three of us are speaking now.

It’s also a much funnier film than I was expecting, in particular Nabhaan Rizwan as the rival rapper. Where did the idea for that character come from?

BT: Riz really wanted Nabhaan on board and I wasn’t sure. He sent us a track of him rapping and he was really talented, so I talked about how he’d do this character and at first I thought what he was doing was a bit big. When Riz and I sat down with our music supervisor, Abdallah, he had to remind us that we are all in our thirties and the kids aren’t listening to what we’re listening to. So this [character] is in that vein of what is popping for them. We’re in a new phase of Pakistani rappers, so as ridiculous as he got he was grounded in what that style seems like from our thirtysomething perspective.

What do you think you took from this collaboration that will inform your work going forward?

BT: I think generally directors feel they need to act like they know everything even when you know you don’t know shit. Admitting that is the hardest part for me. I think that’s how you need to lead, to being able to lean into my crew and into Riz and just shut up and listen. Listen to the environment and to what people are saying around you and adapting the best you can.

RA: To lean into our own stories and to create from a personal place. And the value of collaboration. Bassam and I gave each other permission to be ourselves. It’s fascinating to surround yourself with people who allow you to be your true self – in a way that’s when you actually meet yourself. That’s something I’m going to keep going forward. It’s not just about what work you do, it’s who you do it with.

Mogul Mowgli screens at part of the 64th BFI London Film Festival (including regionally and on BFI Player) on 13 October, before a general release in the UK and Ireland on 30 October.

The post Riz Ahmed and Bassam Tariq on the personal journey of Mogul Mowgli appeared first on Little White Lies.

October 27, 2020
Blumhouse continues to go from strength to strength, at least based on their marketing savvy in dominating the commercial horror landscape over the last decade or so. To celebrate Halloween, and preview upcoming releases, Jason Blum and co. are running a BlumFest virtual event this Thursday the 29th of October, which will include panels discussing all sorts of different topics.
October 27, 2020

Stargirl has found their Eclipso and Shade!

The new Apple TV+ docuseries Becoming You follows 100 children from all over the world for 2000 days. What do these kids do in that time? They open a wormhole to another universe and unleash the Great Old Ones! Oh, no, I’m sorry, that’s not what happens at all. Instead, the docuseries hopes to offer a […]

The post ‘Becoming You’ Trailer: Apple TV+ Follows 100 children for 2000 Days to Tell “The Story of Us” appeared first on /Film.

This DUCKTALES review contains spoilers. DuckTales Season 3 Episode 13 There are two central pillars at the heart of this DuckTales episode. The first is Scrooge questioning, “what if being Scrooge isn’t enough this time?” The second is “we won’t get stronger by attacking the people we love.” Both of these lessons seem separated and they are, […]

The post DuckTales Season 3 Episode 13 Review: Escape from the ImpossiBin! appeared first on Den of Geek.

October 27, 2020
The top movies on the Netflix global chart are pretty diverse this week, from recent originals like Ben Wheatley’s Rebecca to horror pictures such as The Purge: Anarchy and Cadaver. Sneaking onto the list, however, is the Seth Rogen-starring Neighbors, with the 2014 comedy currently sitting at sixth place in the worldwide rankings. Why, then, might the pic be getting so much love right now?
October 26, 2020
The best and worst from the week that was.