SDCC 2020: The Most Romantic Toothbrushing Scene on Television: The LGBTQ Panel 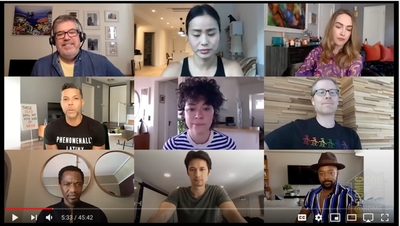 It has been 26 years since “My So-Called Life” went off the air, but Wilson Cruz, the first openly gay performer to play an openly gay character on television said he still hears about his role as Rickie every day. “When was the first time I saw myself represented on television? When I saw myself on television.” He recently watched the Hulu series “Love, Victor,” “binging in a bucket of my own tears.” With shows like that and “Pose” we are seeing a broader kind of diversity, mentioned with appreciation by everyone on the [email protected] panel LGBTQ Characters on Television – What’s Next? even as they looked forward to doing better, with more diversity in crews and stories that go beyond coming out and trauma. Sci-fi/fantasy shows create especially inviting opportunities for GLBTQ characters. Cruz said, “You have to suspend disbelief already so the leaps you have to make aren’t as big and you allow yourself to go places you wouldn’t ordinary allow yourself to go, a great playground for content creators.”

Playing a gay man on “Council of Dads” inspired J. August Richards to be public about being gay for the first time. “I knew that I could not portray this man honestly without revealing that I’m a gay man myself. I was going to have to bring all of my experiences to the table and talk about being black and gay. I wanted to be able to contribute from a place of authority. Before this, I was having such difficulties navigating the business as a black actor [I was not ready to come out]. Now at 46, I want to fight oppression with my work. I feel like my work is this conversation about black male humanity. I feel like the universe was asking me to take my place.”

Jamie Chung described the “right and real and fluid” development of the Mulan character she plays on “Once Upon a Time“. “She and Sleeping Beauty went on a journey to find her prince and developed a relationship that could not be ignored.” Tatiana Maslany spoke about being moved by the response of the “Orphan Black” fans “who were seeing themselves on screen and able to speak to their parents about who they are, a way of telling a story where they could go, ‘Hey, that’s me.’ It was really eye-opening to me because I moved through the world with a lot of privilege, and our show is about identity and the myriad of ways we express being human.” Jamie Clayton spoke about being “a woman of trans experience, playing a woman of trans experience, written by a woman of trans experience” in “Sense8,” “the most beautiful layered cake of all these amazing flavors.” When there are more characters like that, there will be more characters whose gender or sexuality is just one part of the story. “Having more representation means you don’t put the burden on just one character.” Harry Shum, Jr. plays a 400-year-old bi character on “Shadowhunters”. He wanted to make sure the character was not watered down to be “TV-friendly.” His character falls “in love with the soul and not the gender. It’s important to plant seeds that go further than what they’ve been told in past TV,” and it is meaningful to show “a couple being domesticated in a weird sci-fi/fantasy world.”

Clayton said that there are no trans writers on “Roswell: New Mexico,” but they are very open to her ideas about how to make her role more authentic. One small but telling adjustment she described was about her character telling someone she was dating about her history. The script had her say, “There’s something I haven’t told you.” She told them she preferred, “There is something we haven’t discussed yet.” She said, “They didn’t know the conversation. I want you think about how difficult that is before you assume that people owe you that information.”

Rapp talked about the importance of a scene on “Star Trek: Discovery,” when his character and Cruz’s brushed their teeth together. “It was something really domestic, quiet, revealing they’re in a relationship. It was a meaningful way to do it, not about sexual connection or romantic but domestic, intimate. It landed far more powerfully than either of us anticipated.” Cruz added, “We got to meet these people as heroes saving the world, and then they’re lovers, deal with that.”

Everyone on the panel wants to see even more diversity, on and off camera in the industry going forward, with “intersectionality, with non-binary people, trans-disabled, trans-immigrants, the more texture of humanity,” said Brian Michael Smith (“9-1-1: Lone Star”). They want to have more diversity in the stories, with LGBTQ people whose lives are complex and layered, with their gender and sexual orientation being just one part of their stories. Cruz said he wants to see more “queer joy, in a moment like this, the way you are living your life to let in other people is a revolutionary act.”