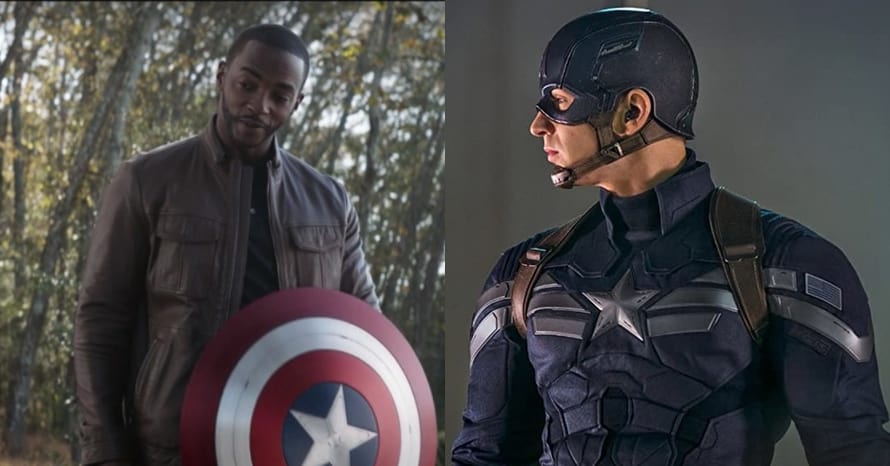 Anthony Mackie finally gets his own Captain America costume for The Falcon and The Winter Soldier in a new image.

It’s been over a year since fans saw Steve Rogers hand over the Captain America mantle to Sam Wilson at the end of Avengers: Endgame, and although there’s a few months until The Falcon and The Winter Soldier arrives on Disney Plus, a new image shows Anthony Mackie wearing a new super suit. The star confessed that production hasn’t been easy throughout the pandemic, but hopefully the hard work will have been worth it by the time the series finally starts streaming.

The new design comes from ‘artoftimetravel’ on Instagram and combines suit Steve wore in The Winter Soldier alongside his Civil War look, mixed with the Falcon goggles. It’s an impressive design for Anthony Mackie, and hopefully fans get to see the star wear something similar by the time the Disney Plus series comes to a close. Until then, we at least know his Falcon suit gets a redesign, looking closer to his comics counterpart than ever before. Take a look at Anthony Mackie in his Captain America suit below.

What do you make of this Captain America suit for Anthony Mackie? Are you excited to see Sam Wilson return in the Disney Plus series? Sound-off in the comments below!

Here is the official synopsis for The Falcon and The Winter Soldier:

Following the events of “Avengers: Endgame,” Sam Wilson/Falcon (Anthony Mackie) and Bucky Barnes/Winter Soldier (Sebastian Stan) team up in a global adventure that tests their abilities—and their patience—in Marvel Studios’ “The Falcon and The Winter Soldier.”

The Falcon and The Winter Soldier will premiere exclusively on Disney Plus in August 2020. Stay tuned to Heroic Hollywood for all the latest news on Anthony Mackie and the future of the Marvel Cinematic Universe, and make sure to subscribe to our YouTube channel for more content!

The post See Anthony Mackie As Captain America In Falcon And The Winter Soldier appeared first on Heroic Hollywood.