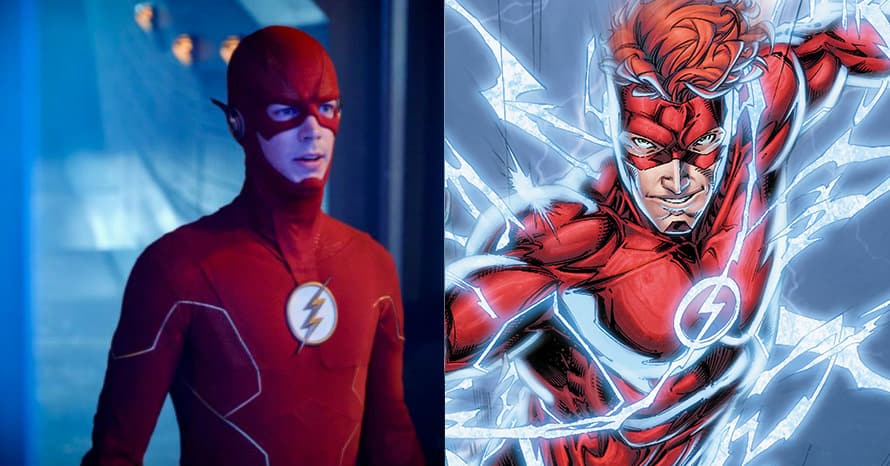 A new concept design pictures The Flash star Grant Gustin as an alternate version of Wally West with a stunning new costume.

Although The Flash star Grant Gustin has played Barry Allen on TV for a number of years now, a new design imagines the actor as a completely different speedster for a future season of The CW series. We’ve already seen The New 52-inspired Wally West become Kid Flash in the show, played by Keiynan Lonsdale, but he left the series in 2018. However, this artwork of Gustin pictures The Flash as the other version of Wally West that comic book readers have loved for decades.

This Wally West design is clearly inspired by the one who returned to the DC Universe during DC Rebirth and donned his own Flash costume, which looks like a combination of the Kid Flash cowl alongside the Scarlet Speedster’s usual outfit. In the concept from ‘rinsh_art’, Grant Gustin dons the red-haired hero’s costume, complete with the blue lightning. It would definitely be an interesting take and obviously anything’s possible with the multiverse. However, it might feel like a cheap way of bringing another Wally West in, even if this design is impressive. Take a look below.

Maybe on another Earth?

Would you like to see Grant Gustin make an appearance as an alternate Wally West in a future season? Sound-off in the comments below!

Grant Gustin’s The Flash is set to return next year on The CW. Here is the official synopsis for The Flash season seven:

Barry Allen (Grant Gustin) lived a normal life as a perpetually tardy C.S.I. in the Central City Police Department. Barry’s life changed forever when the S.T.A.R. Labs Particle Accelerator exploded, creating a dark-matter lightning storm that struck Barry, bestowing him with superspeed and making him the fastest man alive — The Flash. After a thrilling cliffhanger last season which saw the new Mirror Master (Efrat Dor) victorious and still-at-large in Central City, The Flash must regroup in order to stop her and find a way to make contact with his missing wife, Iris West-Allen (Candice Patton).

The Flash will return on The CW in 2021. Stay tuned for all the latest news on the upcoming season of The Flash and be sure to subscribe to Heroic Hollywood’s YouTube channel for more original content.

The actress reportedly couldn’t stop smiling when filming a stunt.

New York Comic-Con may be over, but Bottleneck Gallery is still celebrating some of your favorite Marvel and DC Comics characters with yet another wave of outstanding new prints that will empty your bank account. This time, it’s the mutants of X-Men: The Animated Series teaming up to take down a Sentinel in a new […]

This season, Fear the Walking Dead has adopted an anthology story structure, with last Sunday’s season premiere focusing on the very-much-alive Morgan, who just barely survived the wrath of axe-swingin’, baked bean-eatin’ bounty hunter Emile LaRoux, hired by none other than the trailblazing Virginia (Colby Minifie). Needless to say, by the end of the episode […]

The post Fear the Walking Dead Season 6: Alicia and Strand Make a Friend in Episode 2 Clip appeared first on Den of Geek.

October 16, 2020
At this point, the speculation about what the future holds for Henry Cavill’s Superman is more than likely going to rumble on for eternity until either Warner Bros. or the actor himself come right out and confirm or deny where he’s going to show up next. After all, the Big Blue Boy Scout has been linked to almost every DCEU project on the horizon, as well as many that haven’t been announced yet.
October 16, 2020
Boom…