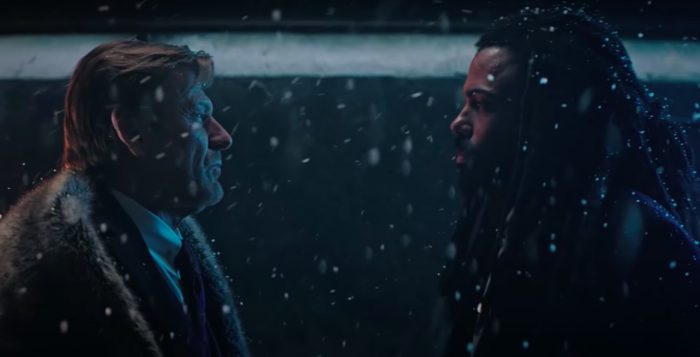 No need for warnings – winter is here. And it has brought Sean Bean with it. The Game of Thrones star makes his debut in TNT’s Snowpiercer in the key role of Mr. Wilford, the inventor of Snowpiercer’s perpetual engine. Watch the Snowpiercer season 2 teaser.

“First there was order. Then there was revolution. Now there is Mr. Wilford,” the Snowpiercer season 2 teaser declares, setting up quite an introduction for Bean as Mr. Wilford, the inventor of the perpetual engine of the train that keeps humanity alive in a frozen world. Presented as the Big Bad for season 2, Mr. Wilford presents an interesting conflict for Jennifer Connelly‘s Melanie Cavill, who was acting in Mr. Wilford’s place in season 1 while still keeping his moniker. Melanie doesn’t have a friendly relationship with Mr. Wilford – she’s the real engineer and creator of Snowpiercer, but Wilford took all the credit. She also left him to die when the long survival journey began, so maybe they can call it even.

Bean is a nice piece of stunt-casting for Snowpiercer that we learned about earlier this summer, though this role complicates the Game of Thrones and Lord of the Rings actor’s reputation of frequent onscreen deaths — the character is played by Ed Harris in Bong Joon-ho’s film, which takes place several years after the events of the series, who is very much alive.

The new Snowpiercer season 2 teaser plants the seeds for a revolution led by Daveed Diggs‘ Andre Layton, as well as confirms the January 2021 premiere date for season 2, which has been in the can for a while. So long that showrunner Graeme Manson already has a plan for season 3, telling Collider back in June, “I think we have a good sense of what our Season 3 could be. It would be more about figuring out a Season 3 ending, whether it’s a cliffhanger to come back again, or not. I’m not sure. The end point, that flagpole that we put up, hopefully moves down the road with more seasons. Or you stick to that end point and figure out a reboot of the characters and the train. I’m not sure what that would look like.”

Set more than seven years after the world has become a frozen wasteland Snowpiercer centers on the remnants of humanity, who inhabit a 1001 car, perpetually-moving train that circles the globe. Class warfare, social injustice and the politics of survival play out in this riveting television adaptation based on the acclaimed movie and graphic novel series of the same name. Starring Jennifer Connelly and Daveed Diggs.

Blood-curdling screams. Taunting phone calls from a psycho killer. Creepy, ominous music with lyrics like “Here’s a knife. Here’s a gun. There’ll be fun for everyone. Death is on the menu tonight!” Elements of a forgotten ‘90s slasher classic? Nope. Just some highlights from the most memorable episode of ABC’s family sitcom Boy Meets World. […]

The post Boy Meets World’s Slasher Episode Was Scarier Than it Had Any Right To Be appeared first on Den of Geek.