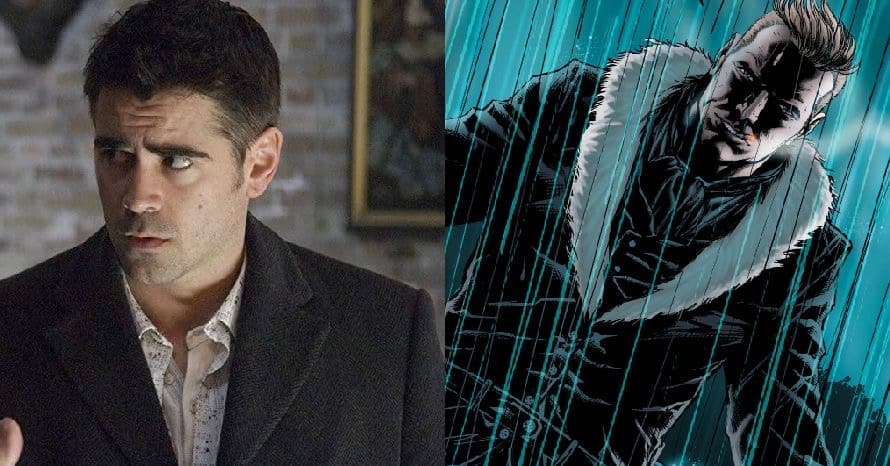 New photos from the set of The Batman show Robert Pattinson working with Colin Farrell.

A fresh batch of photos from the set of the Matt Reeves-directed The Batman show Robert Pattinson and Colin Farrell shooting a scene outside of St George’s Hall in Liverpool. The two were spotted a day after filming a sequence alongside Zoë Kravitz and John Turturro.

The set photos spotlight a scene that appears to be tied to several shots from The Batman‘s DC FanDome trailer, featuring an SUV crashing into a funeral. Robert Pattinson can be seen sporting a wool coat and dark suit while Colin Farrell looks virtually unrecognizable as The Penguin thanks to his impressive prosthetics. Check out the photos below.

What do you think? Are you excited to see Robert Pattinson and Colin Farrell in The Batman? Let us know in the comments section!

Ryan Reynolds On Why He Keeps Making ‘Green Lantern’ Jokes

The Batman is currently scheduled to hit theaters on October 1, 2021. Stay tuned to Heroic Hollywood for all the latest news regarding Robert Pattinson, Colin Farrell and the Batman universe, and make sure to subscribe to our YouTube channel for more content.

October 17, 2020
Star Trek Discovery has truly gone where no other show in the franchise has gone before. Season 3 kicked off this week and its premiere episode followed on from the end of season 2, where Michael Burnham went through a wormhole. In 3×01 “That Hope Is You, Part 1”, Sonequa Martin-Green’s heroine finds herself 1000 years in the future, where the galaxy is very different from the one she knew. The organization that ties together the whole Trek universe doesn’t exist anymore: the Federation, and therefore Starfleet, as well.
October 17, 2020

The Boys showrunner explained why the second season poked fun at Avengers: Endgame.

The post ‘The Boys’ Showrunner Says ‘Girls Get It Done’ Was Inspired By ‘Avengers: Endgame’ appeared first on Heroic Hollywood.

One and a half months. That’s how long you have to watch these movies before they vanish from Hulu – possibly forever. Will these cinematic classics ever return to that specific streaming service? Who can say? Streaming rights are nebulous things. So it’s probably for the best to carve out some time and watch these […]

The post The Best Movies Leaving Hulu in November 2020 appeared first on /Film.

October 17, 2020
The Hollywood Reporter brings word this evening that Michael B. Jordan is set to produce DC’s Static Shock movie.