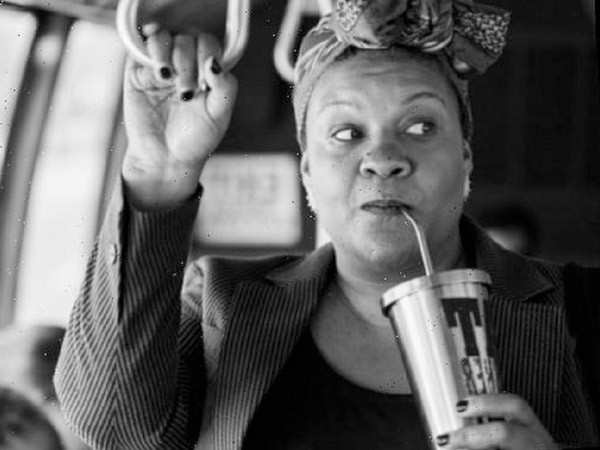 Radha Blank, the writer, star, director, and central character of The Forty-Year-Old Version, is a playwright in real-life as well. Like her character in the film, also called Radha, she got noticed almost a decade ago with Seed, her off-Broadway play. But unlike her character, Radha is a successful writer in real-life. She’s the brains behind the hit shows such as Empire and She’s Gotta Have It. In fact, it was the success of the shows that made her financially independent enough to concentrate on her pet project.

Facts and fiction blur in this semi-autobiographical film, which won the directing prize at the 2020 Sundance Film Festival. Blank stars as a once-promising playwright in her 40s (she’s 44 herself), whose career has stalled. She now teaches drama to disrespectful high school students and slowly tries to come to terms with her unfulfilled ambitions. The film takes us through the everyday-ness, for want of a better word, of Radha’s life. She lives in an apartment with paper-thin walls where she can hear her neighbours having sex. She lives vicariously off them as her love life is going through a lean phase. She’s perpetually late to work, hates travelling in buses and isn’t her diplomatic best around people. Despite all the hardships, she still believes in not selling her art and wants her play to be staged in a proper arthouse theatre rather than a commercial set up. In one of the film’s funniest scenes, she loses her cool at a cocktail party and all but strangles a white producer (Reed Birney) because he wants her drama to echo his own world view about Harlem.

Middle-age, artistic ambitions, the frustration of being an artiste, black politics, the racial treatment meted to black performers and writers — all these issues intermingle with each other in this moving film. Like many other filmmakers before her, Woody Allen being the most obvious example, Radha loves New York and the film is lovingly shot in black and white by Eric Branco. Radha is an old-school filmmaker at heart and insisted on using 35 mm film instead of going the digital way. And she has said in her interviews that she hopes to use real film in her next projects as well. The New York we see here is not the ritzy world capital but it’s seamier underbelly. The black and white treatment gives a poetic lustre to the grime.

But the film’s triumph doesn’t lie in showcasing the struggles of a 40-something black playwright who is almost written-off because of her race, colour, gender or age. The film throws light on the power of reinvention, making the point that age has nothing to do with how you turn around your life. Radha channels her angst through Hip-hop and has no qualms towards learning the ropes from a much younger musician. She turns her everyday struggles into rhymes and finds an instant connection with the audience as she’s kind of narrating their own struggles through her words. This career shift is autobiographical as well, as Radha reportedly turned to music herself when writing wasn’t happening.

This warm, beautifully made film, is also a homage to middle-age with all its problems and challenges. It tells us that the middle-aged people, who are sadly being marginalised all over the world, especially given the perils of the coronavirus pandemic, have still much to offer to the world. Most importantly, it has announced a unique movie-making talent. Radha Blank can write, act, direct and is a good Hip-hop musician as well. We’ve been introduced to an auteur who has made a fine beginning. She’s someone whose career would be followed with much expectations in future.

October 16, 2020
The political-insider website Axios published a story Wednesday headlined, “Joe Biden is the luckiest, least scrutinized frontrunner.” Mike Allen and Hans Nichols declared “Eight months...
October 16, 2020
Akshay Kumar and Manushi Chhillar have collaborated for the first time for Yash Raj Films’ Prithviraj. The film is a historical drama and marks the...
October 16, 2020
Good morning. CEO confidence about the recovery seems to have declined ever-so-slightly since June, according to a new poll conducted by Fortune Analytics, in collaboration with Deloitte. Of...
October 16, 2020
Cardi B has confirmed that she has reconciled with husband Offset, but says the split was not for attention."When people be saying I be doing...
October 16, 2020
The blue-chip index climbed 1.0 per cent, led by pharmaceutical, aero, mining and retail stocks. ― Reuters picLONDON, Oct 16 ― London’s FTSE 100 jumped...
October 16, 2020
Motorsport fans have been deprived of the opportunity to watch classic racers go wheel-to-wheel or rocket up the famous Goodwood hillclimb this year, but they...