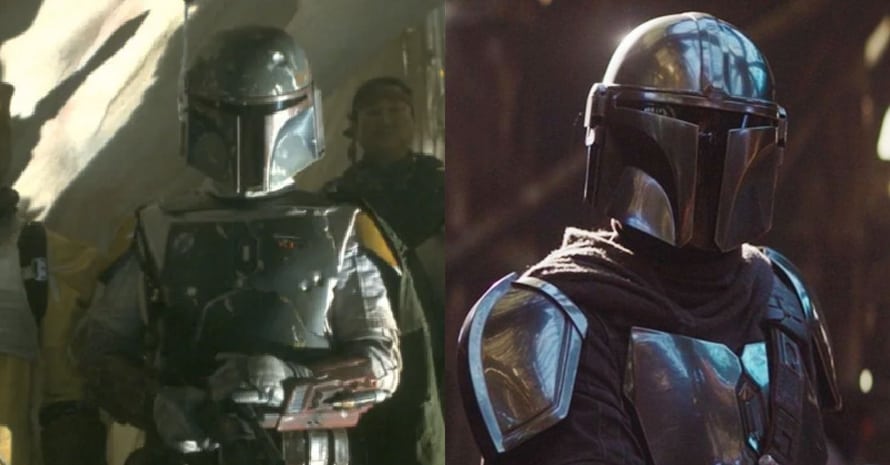 The Mandalorian has never shied away from referencing the original films, but the season two premiere features a few Easter eggs from Star Wars: Return of the Jedi.

Warning! Spoilers ahead for The Mandalorian season two.

Although many fans are keen to see how characters like Boba Fett and Ahsoka Tano play into The Mandalorian season two, many have already noticed some incredible references buried into the world of the space western. Obviously during the premiere episode the we saw Timothy Olyphant’s Cobb Vanth don the bounty hunter’s discarded armor to defend Mos Pelgo. But the episode also included some neat little references to Star Wars: Return of the Jedi.

One eagle-eyed fan, @coldjadedeyed, spotted a detail on the jet pack in the premiere, which showed a replacement panel to cover up the damage done to it by Han Solo in the original trilogy‘s third film. Presumably it was fixed by Cobb Vanth or the Jawas who acquired it. While the second was spotted by @maredfield, who pointed out that the text circling the hologram of the Death Star’s destruction is actually the second paragraph from Return of the Jedi‘s opening crawl. Take a look below.

The high level of artistic detail in The Mandalorian is amazing.
Boba Fett Jetpack was repaired in the precise spot where it was damaged by Han Solo in Return of the Jedi.
This is why I love Star Wars

The text around the Death Star hologram in Chapter 9 of #TheMandalorian is the entire second paragraph of the Return of the Jedi crawl. pic.twitter.com/EU6lDDy5yl

What do you make of the Return of the Jedi Easter eggs? Are you enjoying The Mandalorian season two so far? Sound-off in the comments below!

Ron Howard Says There Is Interest In ‘Solo: A Star Wars Story’ Characters

READ  Chris Columbus Says He Has A Script For Gremlins 3, Gizmo Won’t Be CGI

The Mandalorian season two episodes premiere every Friday on Disney Plus. Stay tuned for all the latest news on Star Wars: Return of the Jedi and be sure to subscribe to Heroic Hollywood’s YouTube channel for more original video content.

previous‘The Mandalorian’ Goes on a Wild, Funny and Icky Side Quest With “The Passenger”
nextUS sees surprise unemployment rate fall to 6.9pc in October | Money