Get ready to spirit yourself away to Japan in two years time. Construction on the Studio Ghibli theme park is chugging along, despite delays due to the coronavirus (COVID-19) pandemic. But the “Ghibli Park,” as it’s being called right now, has been able to resume construction at a brisk enough pace that the theme park will be able to make its planned 2022 opening, setting an official opening date for fall 2022.

Construction began on the Ghibli Park earlier this year, was forced to halt for two weeks in April and May due to the coronavirus pandemic. But despite that brief closure, Aichi Prefecture Governor Hideaki Omura confirms that the park construction remains on track to open in fall 2022.

The park is located in the Aichi Expo Commemorative Park in Nagakute City, Japan, and while that doesn’t exactly make the theme park a “neighbor” for many fans of Studio Ghibli across the world, that concrete opening date does make it easier to plan that long-awaited trip to Japan, and into the worlds imagined by Hayao Miyazaki, Isao Takahata, and other great Ghibli directors.

According to reports, the Ghibli Park will be divided into five lands, some based on specific films while others draw inspiration from multiple Ghibli sources. The park is on a 200-hectare plot of land — surpassing Walt Disney World’s Magic Kingdom at around 50-hectares and rivaling Animal Kingdom’s 230 hectares — which will lend itself perfectly to recapturing the pastoral paradises of Ghibli films. The park will reportedly focus on recreating movie scenes and nature trails instead of rides and attractions.

Three areas are currently under construction: The Hill of Youth area, inspired by Whisper of the Heart and Howl’s Moving Castle; the Giant Warehouse area, based on Spirited Away; and the Dondoko Forest that takes its inspiration from My Neighbor Totoro.

The two areas that have yet to start construction are Mononoke Village, based on Princess Mononoke; and Witch Valley, which is inspired by both Kiki’s Delivery Service and Howl’s Moving Castle. Development on these areas is expected to start in 2021.

But concept art for the Ghibli Park and its five themed areas have already been released by Studio Ghibli, and it looks absolutely magical. See some of the concept art, for what appears to be the Hill of Youth, the Giant Warehouse, and Witch Valley, below. 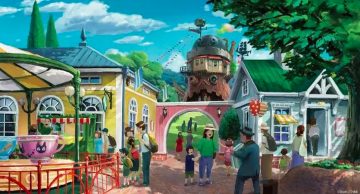 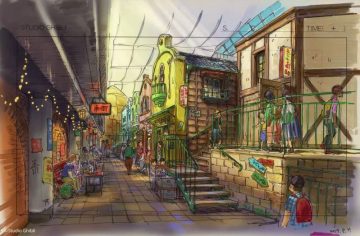 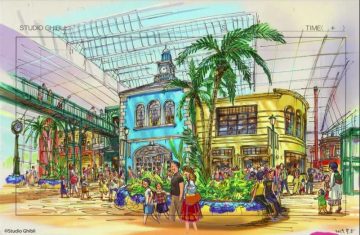 The president of Studio Ghibli, Kiyofumi Nakajima, has stated that an official groundbreaking ceremony for the park’s construction will take place on July 28.

While we desperately count down the days until fall 2022, we can at least still visit the worlds of Studio Ghibli with the films, which are all streaming on HBO Max (see our handy guide on getting into Ghibli films). Goro Miyazaki’s upcoming Earwig and the Witch will also gift us with the first Ghibli film in six years.

The post The Studio Ghibli Theme Park in Japan Sets an Opening Date for 2022 appeared first on /Film.