In this edition of TV Bits:

According to Deadline, the CW is developing a “romantic mystery comedy drama” called I’m In Love With The Dancer From My Bat Mitzvah. The series comes from creator Ilana Wolpert, who was an assistant on Crazy Ex-Girlfriend, and the show will be executive produced by Crazy Ex-Girlfriend co-creator Rachel Bloom and PEN15 executive producer Debbie Liebling. The series “follows a young woman on the cusp of college graduation, who, after being romantically rejected by her best friend, becomes obsessed with a dancer from her bat mitzvah, leading her and her friends down a dangerous rabbit hole of criminal conspiracy. Inspired by real events, it calls into question the stories we tell ourselves and the lengths we’ll go to delay dealing with reality.” Honestly, this all sounds pretty delightful. 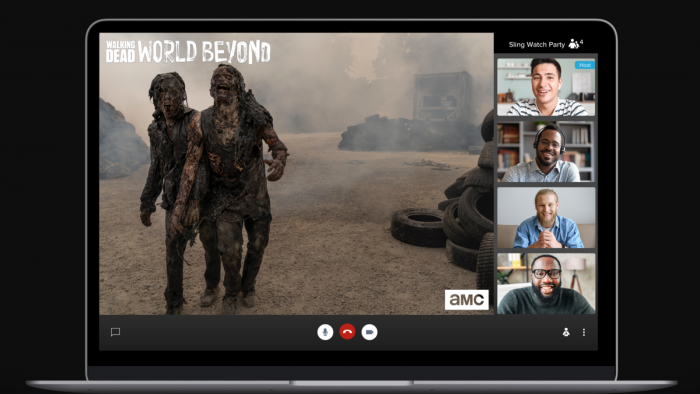 These days more and more streaming platforms are making “watch parties” available, where people can watch movies or TV shows together without leaving their houses (since we’re all still dealing with a deadly virus). Now, Sling TV is following suit. Gizmodo says Sling TV launched their own version of a watch party as a beta feature today, adding that “anyone—including free accounts—can join a co-watching party right now.” The watch party feature is available through Google Chrome and “supports both live audio and video features during group watch sessions with up to four people.” And while it’s available for free for now, only paid subscribers can use it after this month. So you might want to act fast.

Liv Tyler‘s days on 9-1-1: Lone Star are at an end, at least for now. Deadline says the actress won’t return for the second season “due to circumstances related to family and travel during the pandemic.” Tyler’s character won’t be recast, just in case she wants to return someday. “What a thrill it was having a movie star of Liv Tyler’s stature to help us launch the first season of 9-1-1: Lone Star,” Tim Minear, the series’ co-creator, told Deadline. “We loved working with Liv and will be forever indebted to her for her haunting, powerful portrayal of Michelle Blake.”

Sex Education season 3 is adding some new cast members: Jemina Kirke, Dua Saleh, and Jason Isaacs are all now on the Netflix series about “Otis Milburn, a socially awkward high school student who lives with his sex therapist mother, Jean.” Asa Butterfield and Gillian Anderson star. Kirke and Isaacs will be guest stars in season 3, while Saleh is recurring. Season 3 will premiere sometime in 2021.

You’re going to have to wait a long, long time to see the Superstore season 6 premiere. And by that, I mean only an extra week. NBC announced that the new season, which was supposed to premiere on October 22, will now arrive on October 29. This will be the final season for star America Ferrera, who will exit the show on the 100th episode airing November 5.

According to Deadline, The Witcher season 2 has recast the new character Witcher Eskel. Thue Ersted Rasmussen had been cast in the role, and had even filmed scenes, before production had to shut down due to the coronavirus. Now that things are gearing back up, Rasmussen’s schedule has required the show to find a new actor, and they have – Basil Eidenbenz. Rasmussen posted the following about his departure:

Quibi is still around – and so is 50 States of Fright, their horror series that focuses on spooky stories from various states. New episodes are available now, and you can check out a trailer for them below. The episodes are:

Iowa: Almost There – With the ghost of her dead mother terrorizing her, an engineer must fix a turbine in the middle of Iowa while a storm rages.

Washington: 13 Steps to Hell – When a sister descends a strange underground stairwell adjacent to an overgrown Washington cemetery to retrieve her little brother’s lost toy, she finds more than she bargained for at the bottom of the steps.

Colorado: Red Rum – When a bunch of “influencers” descend on Colorado’s most haunted hotel, they find themselves the victims of a bunch of spirits who just want to be left alone.

Missouri: Dogwood – Azalea – When a young girl moves to a new town in rural Missouri with her family, she makes a new friend of a very old and angry soul.

The post Sea of Thieves update Fate of the Damned has arrived appeared first on VG247.

Yesterday, Cyberpunk 2077 was delayed until December (despite already going gold) to ensure that current-gen versions of the game come closer to the high standard that the team has for the PS5 and Xbox Series X iterations. Shortly after the news, an official tweet surfaced from the day before, supposedly confirming no more delays. This mixed messaging set the internet in a frenzy. How could something so important be confirmed one day, and then incorrect the next? The answer is: When that initial response went live a day before, it was true at the time. The wider team at CD Projekt Red didn’t find out about the delay until the day it was announced.

When the news broke, I spoke with several CD Projekt Red developers who confirmed they didn’t know about the delay until they received an internal email shortly before the announcement went live on Twitter. When that knowledge became public, the online backlash was almost instantaneous, sparking criticism of the studio’s internal communication practices and how messages are conveyed to the community. Since then, I’ve spoken to several more CD Projekt Red developers on both the Polish and U.S. sides; according to them, the news was shocking, but not for the reasons people are assuming.

According to three developers, the decision to delay was a swift one after looking at the quality differences between the current-gen and next-gen versions. CD Projekt Red has said that it wants the launch of Cyberpunk 2077 to be perfect, so any perceived flaws are addressed quickly. According to the team, the decision to delay was not even discussed until Monday (October 26), with a decision being reached on Tuesday (October 27). According to Polish labor laws, leadership was not legally allowed to tell the whole team, due to its size of over 1,000 employees, without each individual signing a non-disclosure agreement. To do so would be considered, in terms of relation to stock equity and insider trading, as “leaked insider information.”

One developer (who wishes to remain anonymous) told me – and I later confirmed with the PR team – that “about 90 percent of the studio didn’t know about this,” and that there was laughter and tears from the team because they are excited for people to play their game that has been years in the making, and the delay came out of nowhere and pushes back that experience for all. The laughter and excitement for launch is palpable throughout the studio, but the team knew how the news of the delay would be received. There’s a deeper conversation here regarding what that means in terms of workload, which we are still actively working on.

Speaking with a representative from CD Projekt Red, they confirmed to Game Informer that the Polish law is the reason behind the team at large not knowing about the delay until the day of, in addition to that being a decision just recently made. While this is a standard for many studios outside of the U.S., usually U.S.-based studios have more of a notice regarding events such as a delay.

There was also an investor call immediately following the delay reveal in which the following statement, provided to us from the same CDPR rep, was presented:

As CD PROJEKT is a publicly listed company on the Warsaw Stock Exchange (WSE) our communication has to be transparent to employees, gamers, and investors, as well as in line with the regulations of Polish Financial Authorities & European Parliament, and the Council & Commission Directives. Information of such business magnitude i.e. the delay of the release of the biggest project under development, is, until it is made publicly available, considered price-sensitive and confidential because it could easily influence the potential decisions of investors.

In a nutshell, early, the unplanned release of this information could have potentially led to market abuse and manipulation of CD PROJEKT’s stock price on the WSE. Therefore, due to the aforementioned regulations, the information on postponement of Cyberpunk 2077’s release date couldn’t have been shared with all of the Group’s employees before the current report was filed and made public.

“Going gold” is a term many equate with the game is finished, and that’s true with a small detail usually missed. Going gold is less so for gamers and more for investors so that they know when their investment is ready to ship. Between the announcement of gold and launch day, there are still development processes to follow, including quality issues that are usually reflected in a day zero and/or day one patches. While this game is gold and, as confirmed by the devs, smoothly running on next-gen platforms and PC, the Xbox One and PlayStation 4 versions still need a little polishing.

The reaction to the delay and communication pipeline was heavily fueled by the talk of crunch, which has been a self-admitted issue from the studio for several years now. 2019 and 2020 have been a time of significant internal change within the company to improve work/life balance and to protect the health of the developers. Following a promise to alleviate crunch, CD Projekt Red did initiate a six-day workweek to launch with additional compensation, but this shift did reignite the important conversation as to what crunch is and how prevalent it is industry-wide and not just one standalone studio.

October 28, 2020
We’re excited to announce that The Ascent will be available with Xbox Game Pass at launch in 2021. Developed by Neon Giant and published by Curve Digital, The Ascent will target 60 fps and full 4K on the Xbox Series X, offering amazing gameplay performance for the new generations of console players. We want to […]
October 28, 2020

343 Industries’ Chris Lee, director of Halo Infinite, has stepped back from the project.According to Bloomberg, Chris Lee has left the project and has placed Halo Infinite in the hands of the current team.Lee told Bloomberg he is looking for “future opportunities,” and is confident the team will “deliver a great game, and now is a […]

The post 343 Industries director steps away from Halo Infinite appeared first on VG247.

October 28, 2020
When it launches on November 10, Xbox Series X will be the most powerful console the world has ever seen. One of the biggest benefits of all that power is giving developers the ability to make games that are Xbox Series X Optimized. This means that they’ve taken full advantage of the unique capabilities of […]