WandaVision: Monica’s Aerospace Engineer Friend Might Not Be Who Everyone Suspects 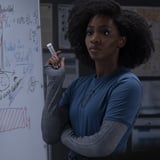 WandaVision is chock-full of Marvel Easter eggs, including what many fans expect are hints at a Fantastic Four introduction. But did a character reveal in the seventh episode foil those hopes? Two episodes earlier, as Darcy Lewis, Jimmy Woo, and Monica Rambeau tried to find a safe way into Westview, Monica reveals she knows an aerospace engineer who’d be “up for the challenge.” The moment is given deliberate focus as Monica texts her friend. Viewers speculated she was referring to the famous Reed Richards, but a later encounter with Major Goodner in “Breaking the Fourth Wall” brings the theory into question.

Who is Major Goodner?

In episode seven, Monica and Jimmy are welcomed by a SWORD team led by a Major Goodner. Monica greets Major Goodner with an old familiarity, but never directly refers to her as the aerospace engineer she’d reached out to. Unfortunately, we can’t look to the comics for context clues since it appears the character was created specifically for the Disney+ series. That won’t keep fans from theorizing, of course. Viewers on social media posited perhaps Major Goodner is a Skrull, specifically Talo’s daughter, who Monica met as a child in Captain Marvel. There’s very little to hold up this theory at the moment, but we’ve seen crazier things in the MCU – like a Fantastic Four crossover.

Could Reed Richards still be the aerospace engineer?

There’s no denying the Fantastic Four hints planted throughout WandaVision already, including a small connection to Ben Grimm that came up in the premiere episode’s closing credits. As far as aerospace engineers go, Reed is considered the standout choice in the Marvel comic book world. Plus, his friendship with Monica can be traced back to 1989’s Captain Marvel #1, as pointed out by Nerdist. You might assume Carol Danvers would be up for this job, but judging by the way Monica reacts to her name, there’s clearly some bad blood there.

ALSO READ  Pass the Razzles: Jennifer Garner and Mark Ruffalo Had a Sweet 13 Going on 30 Reunion

Fans of the Fantastic Four have been eagerly awaiting the family’s inclusion in the MCU, and Marvel CCO Kevin Feige confirmed a new movie is on its way with director Jon Watts. There have been few updates since then, but just last week, Elizabeth Olsen teased a major cameo to come in the show that she’s “really excited” for. Could it really be Reed? And if it is, who will play him? For what it’s worth, theorists on Twitter picked John Krasinski as their Mister Fantastic long before Marvel even confirmed a film. We’ll be waiting on the edge of our seat as drama continues to unfold in Westview, and the aerospace engineer’s identity is confirmed.

ALSO READ  What Does The Future Hold For Clare Crawley & Dale Moss?